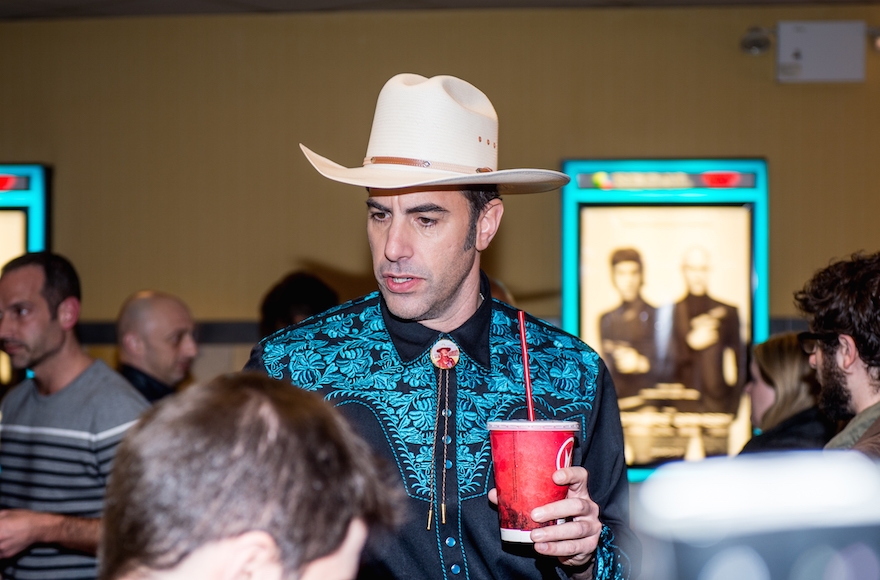 On Tuesday night, a theater full of New Yorkers sang a rollicking rendition of “Throw the Jew Down the Well” led by Sacha Baron Cohen in a cowboy hat and Western shirt.

They seemed to know the words. Baron Cohen, who was at the Manhattan movie theater for a screening of his latest film, made the anti-Semitic song famous on “Da Ali G Show,” the satirical HBO series where he introduced now-iconic characters like Kazakh reporter Borat Sagdiev and gay Austrian fashionista Bruno Gehard.

On the show, Baron Cohen’s characters (including suburban, hip-hop loving Ali G) interviewed unsuspecting public figures, often asking ridiculous questions. At the screening, Baron Cohen had questions for the audience. “Are there any Jews here? Any non-Jews?” he asked.

Fans of all faiths had come out to see a preview of “The Brothers Grimsby,” which opens nationally Friday. The screening was supposed to be followed by a Q&A with Baron Cohen, so his appearance beforehand was a surprise.

Baron Cohen showed up early to introduce an 8-minute tape of unused footage from his 2009 film, “Bruno,” including an attempted prank interview with F. Glenn Miller, a violent white supremacist who had just been released from prison.

The conversation at Miller’s home is interrupted when a staffer “accidentally” trips and spills a drink on Bruno’s expensive trousers, forcing him to strip down to his underwear. Later, Bruno’s “boyfriend” storms in and accuses them of fraternizing. Miller threatens to do bodily harm, and everyone runs.

Afterward, in the safety of the car, Baron Cohen says he thought he saw Miller reaching for a gun.

The New York audience howled. Until, that is, on-screen text explained that the mark was the same F. Glenn Miller who was later sentenced to death for killing three people in a shooting at a Jewish center in Kansas City in 2014. After several quiet minutes, “The Brothers Grimsby” began.

The whole intro was typical Baron Cohen — outrageous, serious and, in a way, brave.

Meanwhile, “The Brothers Grimsby,” which Baron Cohen co-wrote, is about two orphan siblings, Nobby (Baron Cohen) and Sebastian (Mark Strong), who are separated as youngsters. Nobby becomes a football hooligan in the poor village of Grimsby and has 11 children, which he raises on the dole.

Sebastian, the younger brother, becomes a top agent for MI-6, the British intelligence service. But, as luck would have it, while on assignment, he’s misidentified as a spy and reluctantly relies on his brother to save him.

The film, too, is typical Baron Cohen. Many of its laughs — more accurately, nervous titters — are generated by discomfort, as people turn away from the screen. But unlike the “Borat” or “Bruno” films, in which much of the discomfort is generated by moments that challenge the status quo, here, the laughs are the result of vulgarity and over-the-top antics.

Still, there are some genuinely funny moments — and if you dig deep enough, there’s a message about the importance of family.

After the screening, Baron Cohen answered questions from the audience.

Some of his revelations: He doesn’t make films for the box office. He makes films he wants to be proud of if he sees them 20 years later. His motivation is very simple: “I want to hear you guys laugh,” he said.

Also, “The Brothers Grimsby” is partly based on a real-life situation: Baron Cohen’s father was estranged from his brother.

Toward the end of the evening, an audience member — who said he was Jewish and knew that Baron Cohen was active in Jewish circles in England and California — asked if Baron Cohen had gotten any negative feedback from the Jewish community for his antics.

Yes, Baron Cohen replied. “Throw the Jew Down the Well” elicited a letter from Abe Foxman, the former president of the Anti-Defamation League. He said Foxman wrote that while he realized the song was satirical, he “thought it increases anti-Semitism.”

“Now, when I check into a hotel, my code name is Abe Foxman,” Baron Cohen said.