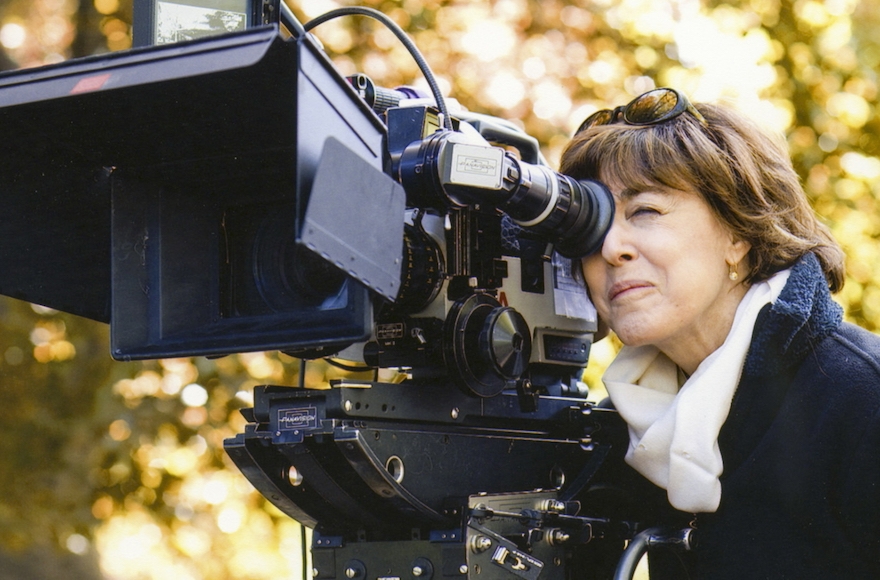 Nora Ephron — the subject of a new documentary made by her son — behind the camera in an undated photo. (Courtesy of HBO)
Advertisement

(JTA) — “It’s almost good,” Jacob Bernstein says. “That’s what she would have thought of it.”

The “she” in this case is the late writer Nora Ephron, Bernstein’s mom. “It” is his elegant and moving documentary “Everything Is Copy,” which debuts Monday on HBO.

“She was tough,” Bernstein says about Ephron, who died in 2012 after a lengthy battle with leukemia. “But she was also extraordinarily generous. She’d have given it approval, but not quite.”

Bernstein says he was not motivated to make the film by what he considers the ephemeral idea of closure.

“I think it’s kind of a simple-minded idea,” he says. “On the contrary, making the film afforded me the ability to keep having a relationship with her.”

“Everything is Copy” keeps the connection alive for viewers, too. In addition to interviewing friends and family, the film uses home movies as well as clips of Ephron promoting one of her projects. And there were many.

Ephron was famously a multi-hyphenate: writer, essayist, playwright, novelist. Her humorous, often self-deprecating essays are what first won her renown. In work collected in her books (including “Crazy Salad” and “I Feel Bad About My Neck”), she joked about everything from the small size of her breasts to the problems of aging.

READ: From the archives: Writer, director Nora Ephron dies at 71

She was perhaps best known for her popular films: Ephron wrote the screenplays for “Silkwood” and “When Harry Met Sally,” and wrote and directed “Sleepless in Seattle” and “You’ve Got Mail.”

The last three established her reputation as the queen of old-fashioned romantic comedies, sophisticated versions of the movies her parents wrote in the 1940s during the heyday of the genre. She grew up in a tempestuous household in Los Angeles, one of four daughters of screenwriters Henry and Phoebe Ephron. Both parents were alcoholics; Phoebe died of cirrhosis of the liver at 57.

It was Phoebe Ephron who provided the Bernstein film’s title — she told her daughter that everything that happened to her should be considered journalistic fodder. In fact, on her deathbed, Phoebe (according to Nora’s sister and frequent writing partner, Delia) suggested to Nora she “take notes.”

While that philosophy frequently made for great reading — consider her novel and film “Heartburn,” about then-husband and Watergate journalist Carl Bernstein’s affair while she was pregnant with Jacob’s younger brother, Max — it seems to generate mixed feelings in her son.

“I think [my] movie has a certain ambivalence about what it means to use your life as material,” Bernstein says.

Pressed, he adds, “I think at times it [being her son] was difficult. I don’t think that’s inaccurate.” 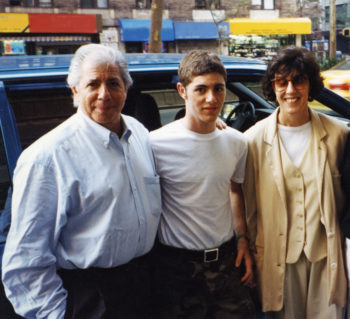 Jacob Bernstein is flanked by his parents, Carl Bernstein and Nora Ephron, in an undated photo. (Courtesy of HBO)

Interestingly, the possibility of becoming fodder for Ephron’s work didn’t concern the legions of friends she collected. Her first husband, the writer Dan Greenberg, says she used to approach celebs at parties and say: “Hi, my name is Nora Ephron. If I invite you to dinner at my house, would you come?”

They frequently said yes and became ensnared in Ephron’s web. The day after she died, “CBS This Morning” host Charlie Rose, who interviewed her several times over the years, said, “I just wanted her to like me.”

“Did I feel a lot of what Charlie Rose did?” Bernstein says. “Sure, we all needed to perform for her and felt the need to win her approval.”

The list of friends participating in “Everything is Copy” includes Meryl Streep — who starred in “Silkwood” and “Heartburn” — Steven Spielberg and Kate Capshaw, the late Mike Nichols, Rob Reiner (who directed “When Harry Met Sally”), Meg Ryan (the fake orgasm scene was actually her idea), Tom Hanks, Rita Wilson and Barry Diller.

Diller, who was a couple of years behind Ephron at Beverly Hills High, tells how she fired him from the school newspaper. She denies it, but it’s true, he insists.

Still, despite the who’s who of talking heads, there are some notable absences: Ephron’s husband, Nicholas Pileggi, and her younger son, Max, declined to participate.

READ: Dustin Hoffman breaks down on “Finding Your Roots” after discovering his Jewish history

At first, Bernstein’s father declined to participate, but he relented.

“The idea of having the breakup of their marriage gone over again and reanalyzed by his son in a documentary was scary to him,” the younger Bernstein says.

Making the film was a voyage of discovery for Bernstein. He learned about “a different person than the person I knew,” he says.

“I was certainly surprised that she was as insecure in her early years about her looks. I think that brought her more pain than she acknowledged.

“I certainly was unaware, as some of her friends were, about the degree to which she softened [after the disease was detected],” Bernstein adds. “You don’t always see the subtle changes if you see someone every day.”

Ephron was diagnosed with myelodysplastic syndrome, an acute blood disorder, in 2005. At first she continued working: She wrote and directed the film “Julie and Julia,” and penned the Tony-nominated Broadway play “The Lucky Guy.”

She kept her illness a secret from all but a few intimates. Most friends and co-workers had no idea Ephron was ill — ironic considering her mantra that “everything is copy.”

“My mother was a singular talent, and I think the movie in certain ways is an attempt to make sense of my own legacy,” Bernstein says. “What it feels to have a smaller footprint than her.”