With Trump’s latest wins, will Jewish conservatives finally embrace him? 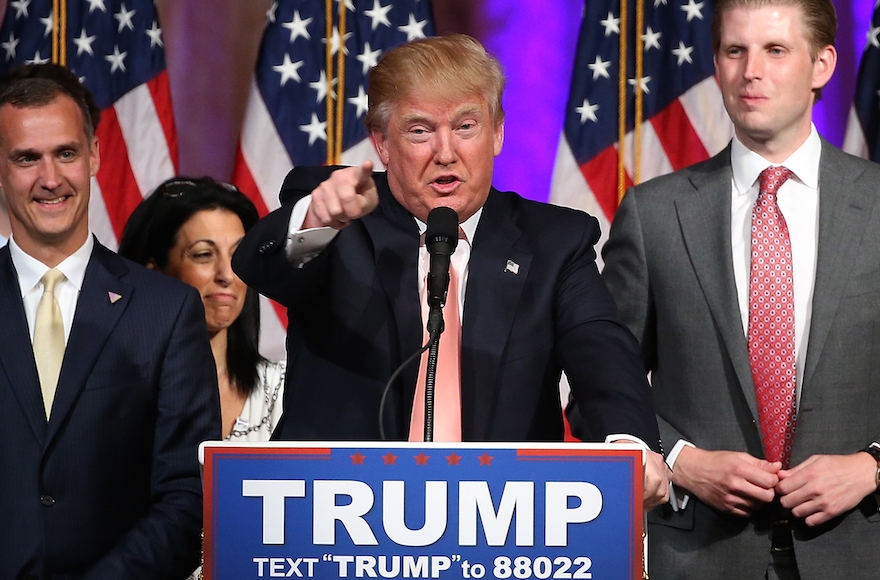 Trump, the real estate magnate and front-runner for the Republican presidential nomination, rolled closer to victory on Tuesday with wins in at least three primary states. His strong showing, earning 161 delegates or more depending on the final tally in Missouri, brought his delegate tally to 621, halfway to the 1,237 he needs to secure the nomination.

The question for Jewish political conservatives is whether to hold their noses and embrace him.

With Sen. Marco Rubio’s departure from the race after losing decisively in his home state of Florida, the alternatives for Jewish conservatives are narrowing: Sen. Ted Cruz, R-Texas, who remained locked in a dead heat with Trump in Missouri as of Wednesday morning, and Ohio Gov. John Kasich, who won his home state.

Both men still face a daunting challenge in overcoming Trump. But cable news pundits theorized Tuesday night that Kasich’s victory, along with the delegates Cruz already accrued having won seven states so far, could keep Trump from winning the majority of delegates and bring the party to a brokered convention in July.

Trump’s rise has appalled the Republican establishment, and even more so its Jewish contingent, many of whom have openly rejected his candidacy. They have reeled both at his insistence that he would remain neutral on Israeli-Palestinian peacemaking and his rhetoric targeting Muslims and Mexicans.

The “Jews are next” thought that haunts the Jewish psyche every time minorities are targeted seemed to bear out the day before the primaries, when a Trump surrogate, Pastor Mark Burns, mocked Sen. Bernie Sanders, the Jewish Vermonter vying for the Democratic nomination.

“Bernie Sanders, who doesn’t believe in God, how in the world are we gonna let Bernie … really?” Burns told a crowd in Hickory, North Carolina. “He gotta meet Jesus, he gotta have a coming to Jesus meeting.”

Sanders is not known to be an atheist. The Anti-Defamation League called the remarks “offensive, erroneous, and exclusionary.”

Rubio, who had emerged as the favorite of Jewish foreign policy hawks, could not bring himself to mention Trump’s name in his concession speech Tuesday night, delivering a plea for a party “built on principles and ideas, not on anger, not on preying on people’s frustrations.”

Trump in his victory speech congratulated Rubio, whom he had derided as “Little Marco” for much of the campaign, for having fought hard and predicted a “great future” for him.

Speaking from his palatial home in South Florida, Trump took aim at the Obama administration’s trade policies and the Iran nuclear deal, saying it had released $150 billion in Iranian frozen assets for “nothing.” (The figure is closer to $100 billion.) He wound up his speech by calling the reporters present “disgusting,” eliciting laughter from his supporters.

There are signs that Trump may be getting a grudging second look from Republican Jews dedicated to the proposition of keeping a Democrat out of the White House. Israel Hayom, the Israeli newspaper owned by Sheldon Adelson, the Las Vegas casino magnate and kingmaker in GOP politics, plastered its Wednesday front page with a photo of Trump and the headline “Within Reach.” The newspaper is known to generally reflect Adelson’s political preferences in Israel and the United States.

Rudolph Giuliani, the former New York mayor who was an early Jewish establishment favorite during his failed 2008 presidential campaign, had told the newspaper the day before that Trump was all but inevitable as a candidate.

“They’re all going to get behind Donald Trump,” Giuliani said. “Here’s one thing we’re united about – we do not want Hillary Clinton as president of the United States.”

Adelson has yet to declare his support for a candidate, although for a period he was said to be wavering between Cruz and Rubio. The Israeli political blogger Tal Schneider reported that at an event honoring Giuliani two weeks ago in Las Vegas, Adelson replied “Why not?” when asked if he would support Trump, and praised Trump’s success as a businessman.

Clinton, with her own decisive string of victories on Tuesday, also took a clear step toward securing the Democratic nomination. With 1,094 delegates to Sanders’ 774, catching up looks to be more difficult than ever for Sanders, who had hoped to repeat his surprise victory last week in Michigan and forge a path to to the nomination through the Midwestern states.

Clinton’s wins in Ohio, Illinois, Florida and North Carolina dashed those hopes. Factoring in superdelegates — party officials who have promised to back her — Clinton now has 1,561 delegates of the 2,383 total delegates necessary to secure the nomination. Clinton and Sanders remained in a close race in Missouri as of Wednesday morning.

“We are moving closer to securing the Democratic Party nomination and winning this election in November,” Clinton said at her victory party Tuesday night in West Palm Beach, Florida.

Clinton praised Sanders for his “vigorous” campaign, but her remarks made clear she is training her sights on Trump, citing some of Trump’s more controversial positions, including the use of torture against prisoners of war and barring Muslims from entering the country.

“That doesn’t make him strong — it makes him wrong,” Clinton said. “To be great we can’t be small.”