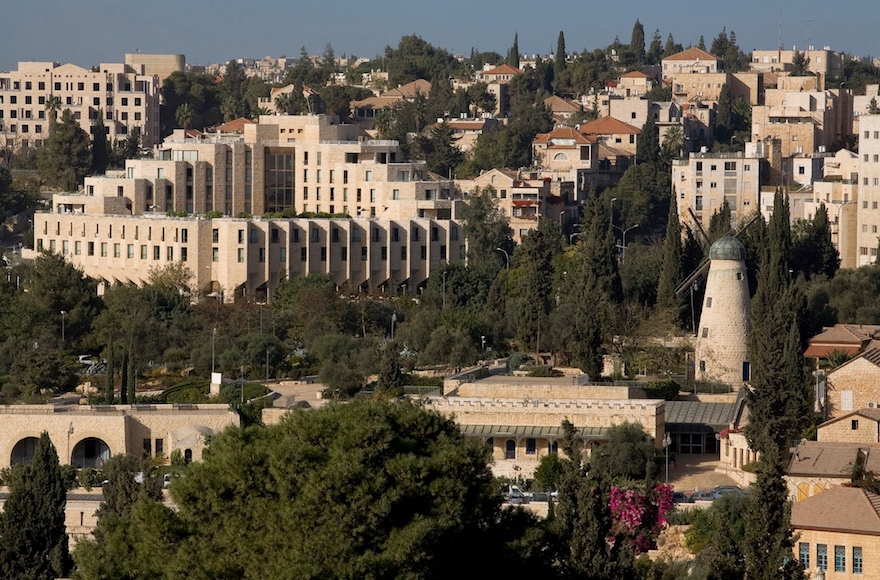 The exterior of the Inbal Jerusalem Hotel. (Pinybal/Wikimedia Commons)
Advertisement

TEL AVIV (JTA) — By now, Gil Azoulay would have expected his hotels would be 80 percent booked for Passover.

Instead, Azoulay — who runs a chain of boutique hotels — has roughly half his rooms still available.

Azoulay opened Smart Hotels — a mini-chain of three small, midrange hotels that focus on providing personal attention to guests — in May 2014. Two months later, war broke out in Gaza, stunting Israel’s tourism industry. The months that followed saw a string of terror attacks in Jerusalem. Then, after a lull, a wave of stabbing and shooting attacks began last September and has yet to ease.

The conflict has taken a toll on Azoulay’s business, driving down Passover reservations 30 percent. Within the tourism industry, he’s not alone.

“The whole city is experiencing this decline,” he said of Jerusalem. “If once it was sold out for Passover and ‘chol hamoed’ [the holiday’s intermediate days], that’s happening less now.”

The Passover season is a significant income source for Jerusalem hotels. Bookings in April 2014 and 2015, the months of Passover, accounted for nearly 10 percent of the total hotel income for western Jerusalem in those years, according to Israel’s Central Bureau of Statistics.

READ: What the $55,000 Israel trip for Oscar nominees looks like

Hotels across Jerusalem have seen a fall in Passover bookings this year, according to Arieh Sommer, director of the Israel Hotel Association. While he estimated that hotels would have about 85 percent of their rooms booked ahead of Passover in a normal year, this year he says the average could be as low as 70 percent.

It’s a drop that began with the July 2014 Gaza war, known in Israel as Operation Protective Edge. Prior to the conflict, in April 2014 — the month of Passover — Jerusalem hotels took in about $40 million. April 2015 saw a 10 percent decline, to approximately $36 million.

“Since Protective Edge, there have been problems in incoming tourism to Israel,” Sommer said. “We saw that after Protective Edge, tourism rose again. But because of [recent] difficulties in Jerusalem, there is a slowdown in tourists coming to Israel.”

Violence isn’t the only factor hurting Jerusalem’s hotels. Apartment rentals, booked through companies like Airbnb, have cut into hotels’ market share since long before the Gaza war. According to the Central Bureau of Statistics, Jerusalem hotels peaked at 10 million foreign guests in 2010. Since then, there’s been a steady decline.

“There was an assumption that the city was collapsing,” said Ilanit Melchior, director of tourism for the Jerusalem Development Authority. “The bottom line is that there was a decline, but it was not dramatic. During the intifada of the 2000s, the city proved it knows how to recover fast. There’s terror all over the world, not just in Jerusalem.”

And not all Jerusalem hotels are suffering. The Waldorf Astoria Jerusalem, which opened in 2014, has reported a 200 percent increase in bookings over last year. General Manager Guy Kleiman attributes the rise to the hotel’s brand name and the praise in reviews.

The Inbal, another five-star hotel, expects bookings to remain relatively stable this year. Alex Herman, Inbal’s vice president of sales and marketing, told JTA that many of its Passover guests are repeat visitors to Israel who remain relatively unfazed by the unrest.

“This is a population that comes,” Herman said. “A lot of people have family here. Life goes on, life is OK.”

None of the hotels contacted by JTA have advised guests to avoid certain areas, nor changed their security protocols in any way. Kleiman echoed Herman, saying the Passover tourists in Jerusalem are often repeat visitors, and they know to avoid more dangerous areas.

“People are mature enough to know where to go, where not to go,” Kleiman said. “People who come to Jerusalem in these times know the city.”

Azoulay expects his hotels to withstand the decline, though he hopes calm will return soon and tourists will again feel comfortable walking the streets.

Like other hoteliers, he’s also counting on Israelis to support the Jerusalem hotels by choosing to spend Passover in the capital. While overall hotel bookings have declined in Israel in recent years, domestic Israeli tourism is on a steady upswing. Internal Israeli hotel bookings increased 9 percent between 2014 and 2015.

“We want the Israeli tourist to come, to reassure him that there’s nothing to worry about,” he said. “We need them. They should come to Jerusalem.”