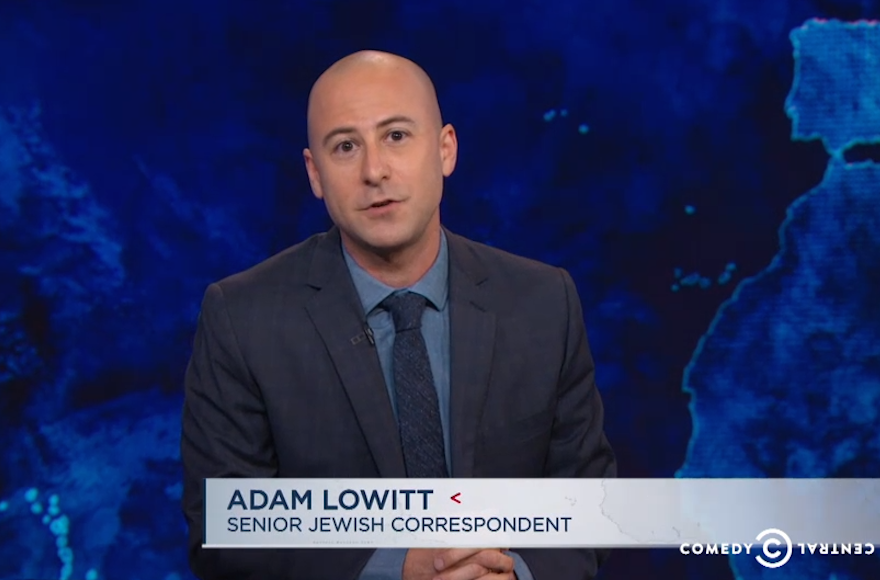 (JTA) — It was just a matter of time before Donald Trump supporters turned against Jews, said Adam Lowitt on “The Daily Show.”

Lowitt, the Comedy Central hit show’s “senior Jewish correspondent,” said in a segment aired Wednesday night, “We were just wondering when it was going to get around to us. First it was Mexicans, then it was Muslims. We were on the sidelines going, ‘Hello, Jews here.'”

“The Daily Show” host Trevor Noah, who last year took over for beloved Jewish comedian Jon Stewart, had said Lowitt must be shocked to see all these “anti-Semitic incidents at Trump events.”

Lowitt singled out supporters of Trump, the Republican front-runner, for making references offensive to Jews.

The segment showed a video clip of a woman last week making a Nazi salute outside a Chicago venue where a Trump appearance had been canceled following skirmishes between Trump backers and detractors.

“As a Jew, if I wanted a woman in her 60s to make me feel bad about myself, I would call my mother,” Lowitt quipped.

He added, “Look, what she is trying to say is Trump isn’t Hitler, this is Hitler. But lady, this,” Lowitt said, raising his arm in a Nazi salute, “makes it pretty hard to listen to anything else that you are saying.”

Lowitt also addressed comments made this week by Trump surrogate Pastor Mark Burns about Sen. Bernie Sanders, I-Vt., including that the Jewish Democratic presidential candidate “gotta meet Jesus, he gotta have a coming to Jesus meeting.”

“Meet Jesus? Bernie is a Jew who lives a simple life and wants to help the poor. All this guy is missing is an interest in carpentry,” Lowitt said. “I think that pastor needs a ‘come to Sanders’ moment.”

Lowitt marveled at the high percentage of U.S. hate crimes directed at Jews.

“Hate crimes against Jews are so normal we don’t even talk about them anymore,” he said. “It’s like the nudity in ‘Games of Thrones.’ We’re just numb to the whole thing.”

Lowitt, who has been performing stand-up comedy for 11 years in clubs and at colleges across the country, joined “The Daily Show” in 2002 as an intern before becoming an executive producer-writer. He has since won six Emmy Awards for his work. In December, he became the show’s senior Jewish correspondent.