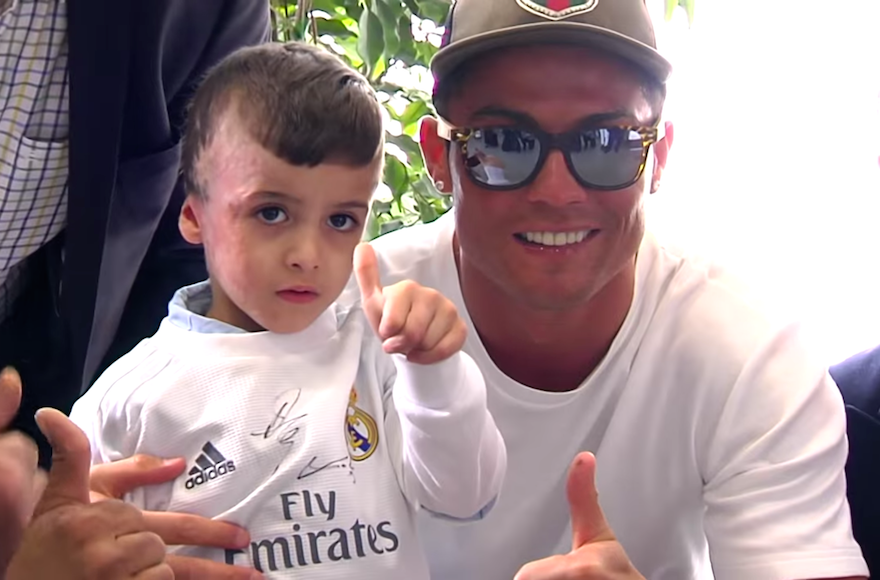 Ahmad Dawabshe, 5, arrived at the Real Madrid soccer club headquarters in Madrid Thursday accompanied by his grandfather, where he met a number of players including his idol, the Maan news agency reported.

Ahmad was the sole survivor of a deadly arson on his family home in the northern West Bank village of Duma on July 30. He lost both his parents, Saad and Riham, as well as his 18-month-old brother, Ali, and was only recently released from Israel’s Sheba Medical Center, where he underwent months of treatment.

Four Israelis are on trial for the arson.

Real Madrid posted a video on social media of the child meeting the team. In it, Ahmad Dawabshe, bearing scars on the right side of his upper face and the back of his head,  is seen playing with several Real Madrid players, including the Portugal-born Ronaldo. He also visited the club’s hall of fame. Several players signed a ball which they gave him, and Ronaldo signed the back of a soccer shirt emblazoned with Ahmad’s name.

Several Israelis were arrested in late 2015 over the deadly arson attack on Ahmad’s family. In January, two Israelis, one of them a minor, were charged with three counts of murder and being an accessory to murder.