Why Purim should be the ultimate hipster Jewish holiday 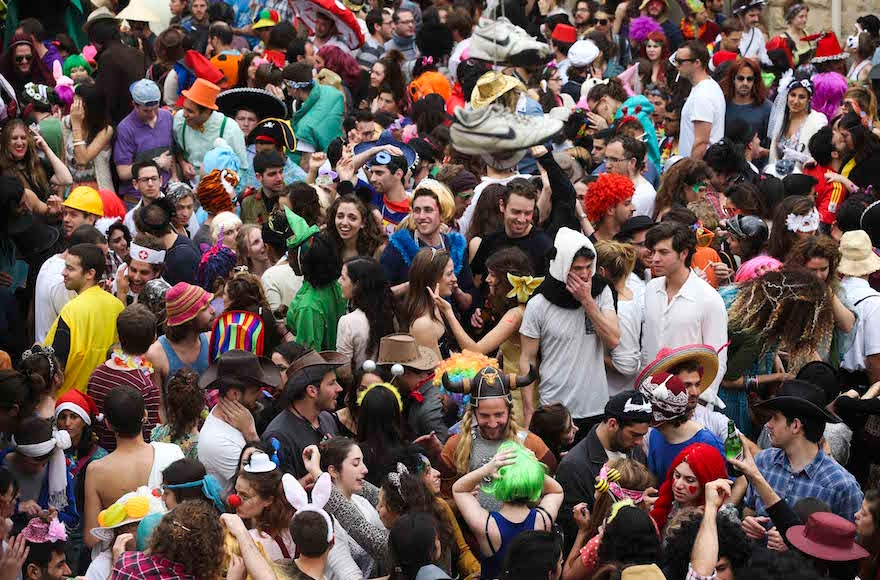 NEW YORK (JTA) — It’s one of the biggest conundrums facing the Jewish community: How do we get millennial Jews excited about being Jewish?

As a millennial Jew myself, I think I have the answer: Purim.

If you’re scratching your head, bear with me. Erase the images of young girls with tiaras and little boys with drawn-on mustaches. Forget your memories of screeches and tears at the synagogue’s Purim carnival.

Instead, imagine groups of 20- and 30-something Jews — perhaps alongside a cadre of equally fun-loving non-Jews — having a blast. They’ll dress up in all sorts of costumes: some over the top, some funny, some sexy, some political. They’d meet up at their friends’ apartments, hang out and have a few drinks. Then they’d head out to parties at popular bars, meeting other friends and making new ones.

If that doesn’t sound like Purim to you, it’s at least what Purim could be.

The holiday involves retelling the story of Esther, who saved thousands of Jews from the deadly designs of an evil Persian vizier. There are synagogue services, costume contests for the kids, and the baking and eating of tasty three-cornered cookies known as hamantaschen. But few secular Jews seem to know that it’s also considered a mitzvah to drink on Purim — to drink so much, in fact, that one can no longer tell the difference between Haman, the story’s villain, and Mordechai, one of the Jewish heroes.

In Israel, Purim is the equivalent of the American Halloween. Religious and secular Jews wear costumes, party with their friends and generally let loose.

In other words, Purim is an excuse to party like it’s 500 BCE.

READ: Should we get hammered on Purim — and Election Day?

Theoretically, Purim should be one of the easiest Jewish holidays for young Jews to get excited about. It doesn’t involve fasting or an arduous amount of praying. So why don’t unaffiliated young Jews like myself go to Purim parties every year?

This doesn’t really happen — yet, anyway — because Purim lacks brand-name recognition in the United States, said Dina Mann, the national marketing and outreach manager for Reboot, an organization that aims to “rethink Jewish ritual in the 21st century.”

“It’s not really a part of the zeitgeist the way Hanukkah is,” Mann said. (Which is pretty lame, since celebrating Purim can be way more fun than playing dreidel — just ask anyone over 5.)

“I think Purim is like the long-lost holiday of the Jewish people in many ways,” said Rabbi Avram Mlotek, a co-founder of Base Hillel, a Hillel International project that aims to engage millennials through low-key programming at the homes of two young New York rabbis. “The ingredients are all there, the recipe for a holiday that totally relates to our current times.”

Quietly, some groups that cater to millennials are getting the message. There are some young adult-oriented Purim parties in New York City this year, including a feast and party at the Manhattan Base Hillel house — Mlotek’s Union Square home  — which opened last July.

Additionally, there are concerts at Brooklyn Bowl in Williamsburg and Le Poisson Rouge in the West Village — two venues with their fair share of hipster caché.

“Purim is one of the most joyous and fun holidays on the Jewish calendar,” Brooklyn Bowl founder Peter Shapiro told JTA in an email. “It’s really got the feel of a festival and we created Brooklyn Bowl to be a venue that feels a bit like a fun festival, so it’s a natural fit for us to celebrate the holiday.”

Shapiro’s venue will host Zusha, a Hasidic group that combines religious vocal melodies with modern folk music. A Wa, a trio of Arab-Israeli sisters who made a splash with their electronic Yemeni music, will play at Le Poisson Rouge.

My friend Jonathan Katz, 24, will be at the A Wa concert, the first big Purim celebration he will be attending in years.

But if we are going to see Drake tweeting a photo of himself wearing a Purim mask — similar to what he does on Hanukkah, when he shares photos of himself looking like the Jewish godfather — it may be up to millennials like me.

“The Jewish model for most events is from the top down,” said Rabbi Brad Greenstein, the rabbi and director of immersive learning at Moishe House, a nonprofit that funds Jewish programming at 85 apartments and houses around the world, where small groups of young Jews live together and host events.

In other words, most Purim parties are organized by synagogues and other Jewish organizations. They plan events and hope they’ll attract young people.

By contrast, Moishe House residents come up with their own party ideas.

“It’s on them to create the event that they want to see happen,” Greenstein said.

Some of the Purim parties planned at Moishe houses this year include an improv comedy bash in Beijing, a bar mitzvah-themed party in Palo Alto, California, and a wine tasting in Washington, D.C.

“Millennials and young Jews aren’t running to synagogues anymore; I don’t know if they ever were,” Mlotek said. “They want to go to a friend’s place.”

In theory, Purim’s timing — in the early spring, months past the endless round of holiday parties but well before anyone can realistically dream of summer — could be a benefit. But there are other obstacles to overcome.

“It seems like the Jewish Halloween,” said my friend Esther Schoenfeld, 23, who doesn’t mean this as a compliment. “So non-Jews wouldn’t celebrate that, and Jews who were secular and already get really into Halloween are like, ‘OK, we kind of already have this.’”

READ: The masks we wear on Purim and — on Facebook

Purim, said Mann, is subject to an unfortunate feedback loop — because so few people know about Purim, it’s harder for it to break into the secular Jewish world.

Greenstein, however, sees potential in Purim. The holiday’s themes align with categories that he has seen resonate most with young Jews, especially social justice. The story of Queen Esther, he says, is ripe for a celebration of women’s rights.

But for those who may not describe a discussion of second-wave feminism as their idea of good time, Purim remains an untapped resource waiting for its mainstream moment. In our multicultural day and age, various holidays are increasingly embraced by American society at large. Practically everyone — Irish or not — celebrates St. Patrick’s Day. The Hindu holiday of Holi, which involves getting covered in colorful paint powder, is fast becoming part of the springtime party calendar.

And yet, Purim remains relegated to child’s play. And maybe that is just how it is meant to be. After all, there are always positives to flying under the radar.

“I personally like Purim when it is,” Mann said. “You can get discount Halloween costumes after Halloween.”