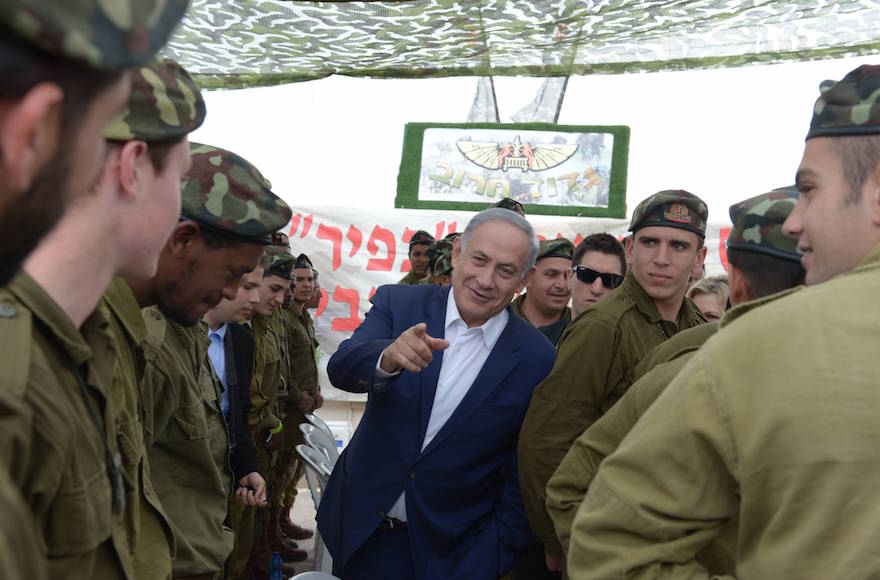 WASHINGTON (JTA) — Israeli Prime Minister Benjamin Netanyahu reportedly asked John Kerry to publicly state that Israel does not carry out extrajudicial killings, after a group of U.S. lawmakers asked the secretary of state to investigate such claims.

Meanwhile, Sen. Patrick Leahy, D-Vt., the lead lawmaker making the request, rebuked Netanyahu for his initial response to the revelation of the letter, saying the Israeli leader misunderstood the relevant law, which requires defunding military units underwritten by U.S. government funds should they be found in violation of U.S. human rights norms.

The Times of Israel reported that Netanyahu made the call to Kerry Friday.

Netanyahu said in a statement Wednesday that the February letter by Leahy and 10 Democrats in the U.S. House of Representatives calling for an investigation of alleged human rights abuses by his nation’s military should instead be directed at Palestinian inciters.

“Israel’s soldiers and police officers defend themselves and innocent civilians with the highest moral standards against bloodthirsty terrorists who come to murder them,” said the statement.

“Where is the concern for the human rights of the many Israelis who’ve been murdered and maimed by these savage terrorists? … This letter should have been addressed instead to those who incite youngsters to commit cruel acts of terrorism.”

Leahy, responding Thursday to Netanyahu, said there was no parallel, because the United States does not fund Hamas and other terrorist groups targeting Israel.

“The Prime Minister of Israel knows – and it should go without saying – that the United States does not provide weapons or other aid to Hamas or any other terrorist group, and that no nation more strongly condemns and works to eradicate terrorism worldwide than does the United States,” he said in a statement.

“There are multiple laws prohibiting such aid to Hamas and other such groups, and one reason Israel is the largest recipient of U.S. military aid is to help defend against terrorist attacks.”

Leahy also said the law underpinning the letter’s request, which he authored and is named after him, targets specific military units, not entire countries, and only when it is established that the government in question has not adequately investigated the alleged abuses.

“The Leahy Law, which has existed for nearly 20 years, applies uniformly, worldwide – no country is exempt – and it applies to specific military personnel and units, not to general security forces, when U.S. aid is involved,” he said.

“It has led to the suspension of U.S. aid to military personnel and units found to have committed abuses in many countries when governments fail to punish those responsible, and only when those governments themselves have failed to act … This is only fair to U.S. taxpayers, and it is necessary in upholding the rule of law that our country stands for.”

First reported by Politico, the February letter from the lawmakers to Kerry cites Amnesty International reports alleging the “extrajudicial killings” of at least four Palestinians, men and women. Among those named are Fadi Alloun, who stabbed a 15-year-old Jewish teen in Jerusalem and was shot and killed during the chase to apprehend him; Saad Al-Atrash, who was shot and killed as he tried to stab a soldier in the West Bank city of Hebron, and Hadeel Hashlamoum, a Palestinian woman who was shot to death after arriving at a Hebron checkpoint with a knife.