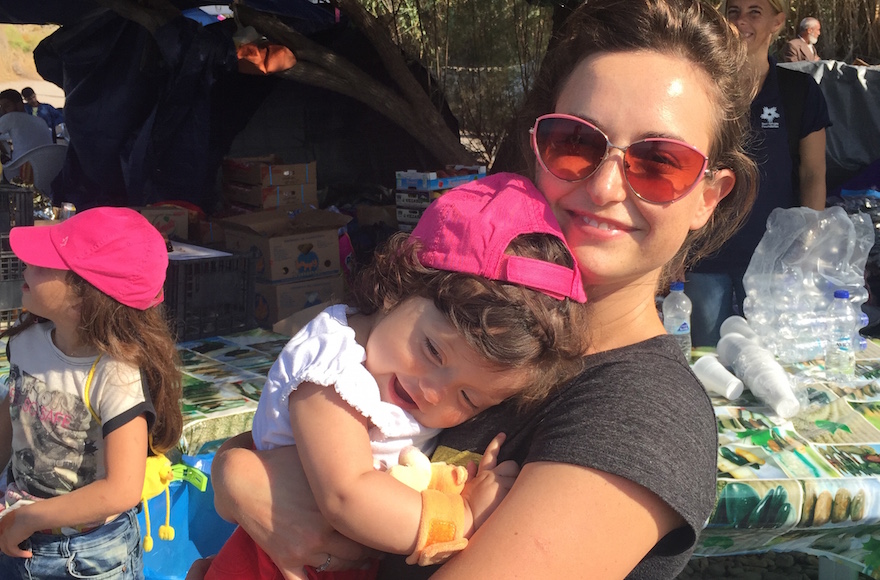 Actress Milana Vayntrub, the "AT&T Girl," volunteering with Syrian refugees in Lesbos, Greece. (Courtesy of Milana Vayntrub/Can't Do Nothing)
Advertisement

(JTA) — You know Lily. You do. She’s that chipper, slyly witty girl who works at the AT&T store — not a real one, but the one you see in those ubiquitous TV ads.

What you may not know is that the actress who plays her, Milana Vayntrub, is a nice Jewish girl. She’s also a former Soviet refusenik who, between acting gigs, stand-up spots and the comedy webisodes she writes and produces, is trying to change the world.

Can’t Do Nothing is a new social-media-driven movement to raise awareness and funds to ease the dire plight of Syrian (and other) refugees. Vayntrub launched the web platform this year after a getaway to Greece with her dad, which turned into a one-woman mission to make some kind of difference once she realized the nature of the drama unfolding just miles away.

“I couldn’t leave knowing that I was so close,” she told JTA about her decision to extend her trip in hopes of making a difference. “I really believe that an opportunity that goes unfulfilled turns into a curse. And I knew that if I went, I would never regret it.”

Using only her iPhone, Vayntrub filmed what would become a compelling 14-minute documentary of her experience helping refugees. “I don’t want to be a passive citizen anymore — I want to be … a force for good,” she says into her phone’s camera with a self-aware smile. Hours earlier, she had traded in her ticket home for one to the isle of Lesbos, where overloaded rafts of Syrians were arriving daily.

The news footage she saw in Athens from the BBC and other international channels — CNN was showing wall-to-wall Trump and Emmys coverage — made her realize just how ignorant she and most Americans are of the situation. In particular, a clip of a girl at the Macedonian border passing out sack lunches to refugees boarding trains hit home.

“That really affected me for a couple of reasons,” she said. “One, this is a girl who is not funded by a nonprofit. She’s out there literally by herself just passing out these bags. And two, there’s something about the imagery of groups of people getting on crammed trains in the middle of nowhere that was very reminiscent of what our people had to go through.”

Once on Lesbos, Vayntrub said she did what she could — helping refugees off boats, changing diapers, offering rides to the buses that would take migrants to inland camps.

Upon her return to the U.S., the sense of duty lingered, and led her to team up with Eron Zehavi, a friend and tech entrepreneur, to start CantDoNothing.org, a site to “connect people who want to help with people who are already helping,” she explained.

In the little more than two months since #cantdonothing went live, it’s made more than a quarter-million trips around the Twitterverse — and proven that hashtags can lead to hard cash. Vayntrub claims donations sparked by the campaign have funded multiple classrooms and hired full-time teachers at refugee camps in Jordan, bought a first-aid tent and ambulance in Lesbos, and provided prescription eyeglasses for more than 150 children, among other things.

Can’t Do Nothing isn’t a fundraising entity — “the last thing I wanted to do was start another organization when there are so many that are already doing it and need help,” Vayntrub said. Rather, the site connects people to groups like the Boat Refugee Foundation, a Dutch-based network that puts volunteers on the ground in Greece; The Syria Fund, supporting educational programs for refugees; and Off Track Health, which has been providing first aid and other services on Lesbos and elsewhere. Separate areas on the website encourage users to give time, money or their voice (“This is something we all have, and it’s free”) to the cause. 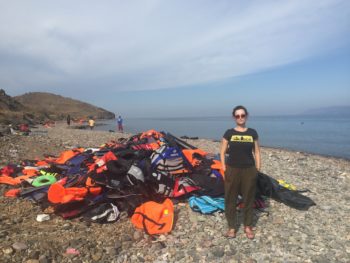 Milana Vayntrub on the beach in Lesbos, where she aided refugees arriving on shore. (Courtesy of Vayntrub/Can’t Do Nothing)

“I’ve always felt that as an influencer, I have an obligation to spread a message of love and good — because I can, because people are listening to what I’m saying,” Vayntrub said. “So why not give them something to actually listen to?”

Besides her ubiquitous presence as Lily, Vayntrub appears in the new Judd Apatow-produced Netflix series “Love,” HBO’s “Silicon Valley” and several online shorts. The archived web series “Let’s Talk About Something More Interesting,” in which she co-conducts snarky interviews with celebs such as Matt Damon, still draws a following, too.

It’s not a career path that was obvious in 1989, when Vayntrub, then 2 years old, and her parents left everything behind in their native Tashkent, Uzbekistan — then still part of the Soviet Union — on an arduous yearlong escape via Austria and Italy that ultimately brought them to Los Angeles.

She recollects little of the journey, but “I remember having parents who weren’t from here,” she said. “So I certainly feel connected to that, I understand what that’s like.”

Growing up in a heavily Russian section of West Hollywood, Vayntrub recalls the challenges of learning what it meant to be Jewish after arriving from a place where Judaism, legally, did not exist.

“My grandmother was a nanny for an Orthodox Jewish family, and she would come home and tell us about that,” she recalled. “And then we would be, like, ‘OK, I guess it’s time to learn about Passover.’” Little by little, the Vayntrubs reconnected with their heritage, eventually joining a synagogue.

But Vayntrub said even if she hadn’t been Jewish or a refugee herself, the stories of the Syrians fleeing their homes would have sparked her attention and compassion — and that action is in everyone’s interest.

“If we don’t do anything, what is this crisis going to look like 10 years down the line, when millions of kids don’t have an education or resources?” she asked. “It makes so much sense to me as an investment in the future of the whole planet.”

In June, she will travel back to Greece, as well as Jordan, to see “the fruits of our labor there” and assess what else needs to be done.

By summer, Vayntrub hopes another branch of Can’t Do Nothing will have risen — on a different pressing issue such as climate change or homelessness or women’s rights, perhaps headed by a different person.

“The goal of Can’t Do Nothing is to ask people, what matters for you?” she said. “And whatever it is, what are you doing about it? How bad does it need to get before you take action?

“That’s been the biggest lesson in this for me, that I put some effort into trying to make the world better and it’s working. I almost can’t talk about it without getting emotional because it’s so cool.”

It has nothing to do with celebrity, Vayntrub insisted.

“I cut together a YouTube video and made a really simple website — anybody could make that website,” she said. “Everybody can do something. We all have the power to be influencers. You certainly won’t be able to do anything if you don’t try.”