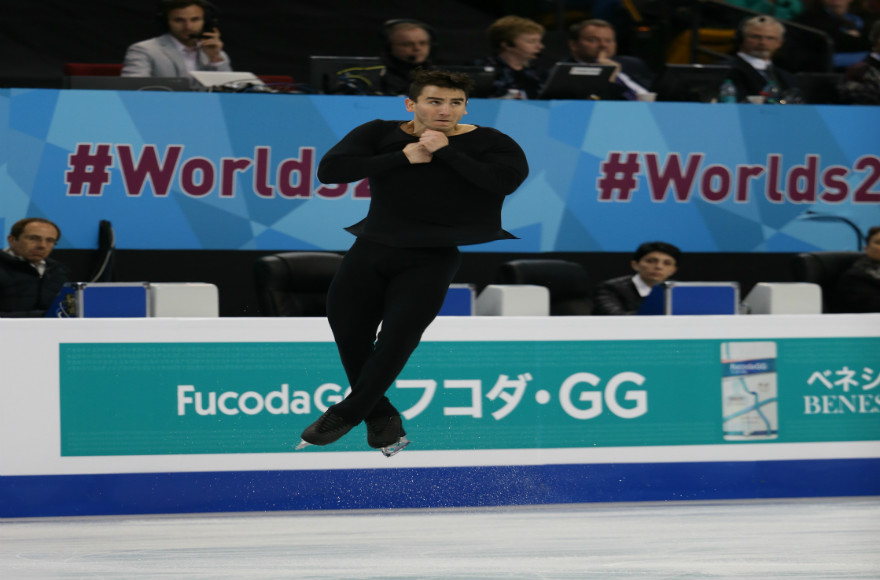 BOSTON (JTA) — Scoring a new personal best, American Jewish figure skater Max Aaron was part of a trio that landed the U.S. skaters in the top 10 at the ISU 2016 World Championships.

The six-day event being held through Sunday at the TD Garden marks the first time in its 130-year history the international competition is in Boston.

Aaron, the 2013 U.S. champion, scored 254.14 points and placed eighth overall in his third appearance at a World Championship.

“This is truly special. It’s a moment I will never forget. I’ve always wanted this on home soil,” Aaron, 24, of Scottsdale, Arizona, said in a statement from the TD Garden.

The U.S. men fell just shy of securing the maximum of three places for the United States at the next World Championships; they will have two spots.

On Friday night, Aaron skated to music from the score of “Black Swan,” by Clint Mansell, according to Boston Globe reporter Shira Springer..

“Max produced as good a long program as I’ve ever seen from him,” Springer told JTA in an email.

She added: “If he keeps up the quads and makes progress with his overall presentation, it will be interesting to watch how he progresses from his eighth place finish at Worlds.”

Three years ago, after winning the gold medal at the 2013 U.S. Figure Skating Championship, Aaron told JTA that he grew up looking to Jewish athletic giants for inspiration.

“I always thought the list needed to be longer. We needed to have a stronger representation of Jewish athletes, and I’m so happy to that I’m part of them now,” he said at the time.

Jason Brown, a Jewish-American skater who finished ninth at the Sochi Olympics and was fourth at the worlds last year, is in training following a back injury and was not part of the U.S. squad for this event.

Also skating at the Worlds Championships was Alexei Bychenko, who in January became the first Israeli to win a medal at the European Skating Championships, where he took the silver. He finished 13th in Boston.