Watch a flight attendant’s guide to the Passover seder 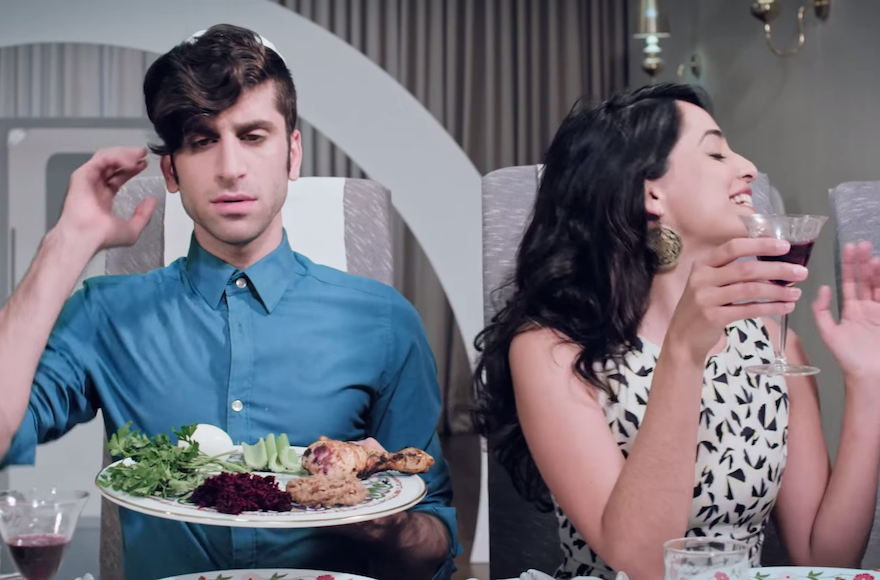 A scene from the Charles and Lynn Schusterman Family Foundation's Passover video. (Screenshot from YouTube)
Advertisement

The Passover seder can seem a bit arcane even to the habitual observer. What’s the story with the Four Questions again?

For the uninitiated, the holiday meal must be downright mystifying. Hence the Charles and Lynn Schusterman Family Foundation’s new video, which aims to welcome young, unengaged Jews and non-Jews to the seder table using a familiar format: An airline safety tutorial.

“The video is meant to be fun, accessible and informative. It has cultural references that everyone can relate to, and at the same time you can learn more about Passover and the traditions involved in creating a seder,” said Roben Smolar, the Jewish outreach organization’s director of communications. “For those who are interested, the video points you to a whole series of resources that can inform discussions around the seder table and also help you create a seder in your own image.”

In “The Safer Seder,” posted online Sunday, a female flight attendant (who looks vaguely like she works for El Al and speaks unaccented English with impressive Hebrew gutturals) oversees a stylized seder. A multi-ethnic group of millennials sit in airline seats along one side of Passover-appointed tables.

Only one participant wears a kippah, and Darth Vader makes a wine-induced appearance.

“Hello and welcome to the Passover seder. Please pay attention to the following safety announcements,” the flight attendant says in chipper airline announcement drone. “Since this holiday is bread-free, all leavened items are strictly forbidden.”

Knowing punch lines from the 90-second video: “This evening is all about freedom, which is why you must not leave your seat until you reach the designated zone in the Haggadah,” and “The toilets are located nearby, although after eating matzah none of you will be needing them.”

“For further information, check the Haggadah in front of you,” the flight attendant concludes. “On behalf of the Jewish people, enjoy your seder and chag sameach.”

If you don’t have a Haggadah handy, on-screen text directs you to the Schusterman Foundation’s online guide to Passover 2016.