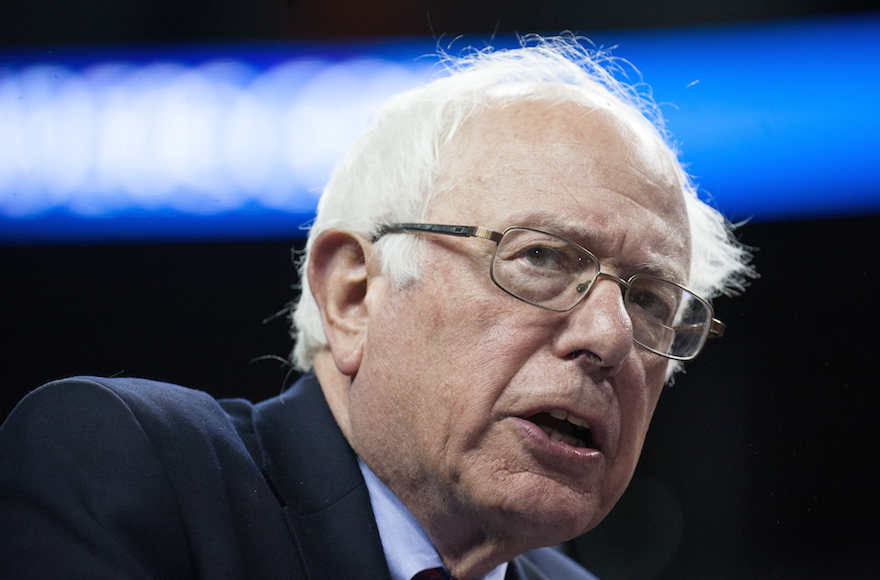 Sanders, the Independent senator from Vermont who is mounting a strong challenge against Hillary Clinton, the front-runner in the Democratic race, also said the Palestinians must condemn terrorism and recognize Israel as a Jewish state.

Speaking this week with the New York Daily News editorial board ahead of the state’s April 19 primary, Sanders said Israeli behavior with the Palestinians would be linked to U.S. policy toward Israel.

“To the degree that they want us to have a positive relationship, I think they’re going to have to improve their relationship with the Palestinians,” he  said.

He noted at the outset of the foreign policy portion of the interview his own time spent on a kibbutz in Israel in the mid-1960s, and that he still had relatives in the country.

“I lived in Israel. I have family in Israel,” said Sanders, the first major party Jewish candidate to win nominating elections during the primaries. “I believe 100 percent not only in Israel’s right to exist, a right to exist in peace and security without having to face terrorist attacks.”

He said recognizing Israel involved its recognition as a Jewish state, calling that “the status quo.” Israel wants an explicit recognition of its Jewish character as part of any peace agreement, which the Palestinians have resisted in talks.

His criticisms of Israel included its settlement building and what he depicted as a disproportionate response to Palestinian attacks.

“From the United States’ point of view, I think, long term, we cannot ignore the reality that you have large numbers of Palestinians who are suffering now, poverty rate off the charts, unemployment off the charts, Gaza remaining a destroyed area,” Sanders said.

“And I think that for long-term peace in that region, and God knows nobody has been successful in that for 60 years, but there are good people on both sides, and Israel is not, cannot, just simply expand when it wants to expand with new settlements.

“I think if the expansion was illegal, moving into territory that was not their territory, I think withdrawal from those territories is appropriate,” Sanders said, although he could not specify where such withdrawals should take place,.

When the editorial board continued to press him on settlements, Sanders emphasized that he also had “baseline” demands of the Palestinians.

“The absolute condemnation of all terrorist attacks,” he said. “The idea that in Gaza there were buildings being used to construct missiles and bombs and tunnels, that is not where foreign aid should go. Foreign aid should go to housing and schools, not the development of bombs and missiles.”

Sanders said he opposed bids by the Palestinians to try Israelis for war crimes at the International Criminal Court, but also suggested that Israel’s response to Hamas attacks on Israel during the 2014 Gaza Strip war was disproportionate.

“Look, we are living, for better or worse, in a world of high technology, whether it’s drones out there that could, you know, take your nose off, and Israel has that technology,” he said. “And I think there is a general belief that with that technology, they could have been more discriminate in terms of taking out weapons that were threatening them.”

Israel has said it took care to avoid killing civilians during the 2014 war.