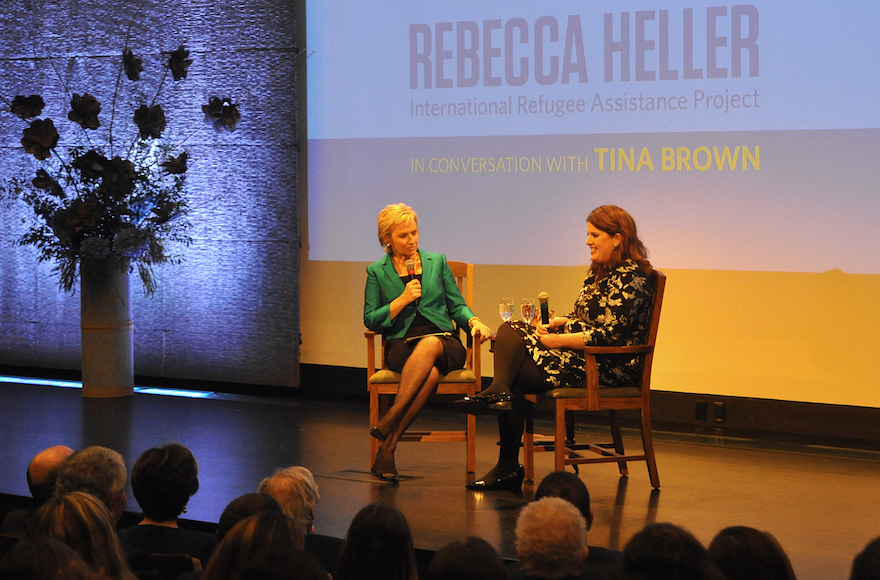 NEW YORK (JTA) — John Oliver was in the audience Monday night for the awarding of The Charles Bronfman Prize, and here’s the crazy thing – he may not have been the coolest or even funniest person in the room.

That’s because the honoree at the Manhattan ceremony was Rebecca Heller, the director and co-founder of the International Refugee Assistance Project, which wrangles law students and pro bono attorneys to provide legal assistance to refugees.

The Charles Bronfman Prize, established in honor of the philanthropist by his children, honors Jews under 50 who distinguish themselves in humanitarian work. As Rosalie Silberman Abella, justice of the Supreme Court of Canada, put it in her introductory remarks, Heller represents the “alchemy of passion, fearlessness, resoluteness, entrepreneurship … and feistiness” shared by previous prizewinners.

Heller was at Yale Law School when she travelled to Israel in 2008. In neighboring Jordan, she met with refugees from Iraq and realized in order to navigate a “deeply entrenched” and patchwork system of resettlement, they needed – what else — a good lawyer. The student organization she founded upon her return became IRAP, which has provided legal assistance to more than 10,000 refugees and claims an 85 percent success rate with resettlement. (Oliver featured an IRAP client, an Afghani translator stranded after assisting U.S. forces, on his HBO show “Last Week Tonight.”)

Among those resettled by IRAP was Farah Al-Khafaji, who spoke at the Manhattan ceremony. An Iraqi, Al-Khafaji and her father started an engineering and construction company that assisted American forces in building helipads, roads and security barriers in the wake of the 2003 invasion. This, as you’d imagine, was not a universally popular vocation in Iraq, and in 2006 she was assaulted, her father was kidnapped, and her husband was killed.

After waiting almost six years for the U.S. to award sanctuary to her and her two children, Al-Khafaji had almost given up hope when she heard about Heller and IRAP. Heller got her an interview at the U.S. Embassy, a safe home in Baghdad and eventually a one-way flight to Washington Dulles International Airport.

“My boys and myself would be dead and buried in Iraq” without IRAP, she said at the award ceremony.

In an on-stage conversation with publishing titan Tina Brown, Heller came across less like a global crusader than, I don’t know, a writer for Oliver’s show. (Oliver laughed as loudly as anybody in the audience.)

She recalled a colleague’s advice on making IRAP more professional: “‘We need a better intake system than running into me on the street.’” She described how the U.S. would reject the claims of Iraqi asylum seekers because of dubious charges leveled against them during Saddam Hussein’s reign of terror — compounding their suffering because we “forgot to burn down the Iraqi Ministry of Justice.”

And she ridiculed the torturous screening process that makes refugees from Syria, Africa and Colombia have to prove, over and over again, that “the worst thing that ever happened to you happened.

“And this is the way we are saving people,” she deadpanned.

The award ceremony, postponed from last year so Heller could give birth to her daughter, took place in the genteel surroundings of the New-York Historical Society. Meanwhile, a nasty and often misinformed national debate rages on immigration and refugees. Heller, who described herself as an “intensely neurotic and self-critical Jew,” decried the “false conflation between terrorism and refugees” and tied her work to Jewish history.

Today’s refugees are no different from those who wandered from “port to port” during World War II seeking safe harbor, she said. “What’s different is that we are calling them terrorists.”

Lest anyone fail to make that connection, Justice Abella described her Jewish family’s story. Her father survived Theresienstadt, her mother Buchenwald. Her father, a lawyer, was appointed by the Americans as head of legal services at the displaced persons camp where Abella was born.

Abella recalled when Eleanor Roosevelt visited the DP camp, and Jacob Silberman got to offer an official greeting. “These few children are our fortune, and our sole hope for the future,” he told the first lady.

“I was one of those children,” said his daughter, the first Jewish woman to sit on Canada’s high court.