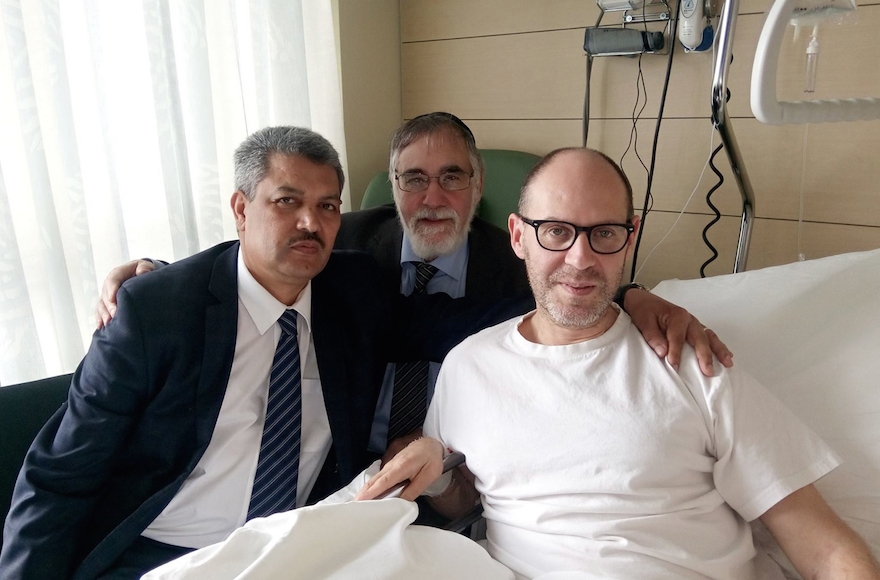 (JTA) — In a series of Facebook posts from his hospital bed, a Belgian Jew has documented his recovery from the Brussels terrorist attacks — and become a national symbol of resilience and reconciliation.

Walter Benjamin lost his right foot in the March 22 explosion at Zaventem Airport, one of three suiciding bombings that rocked the Belgian capital that day, killing 32 people and wounding more than 300. His Facebook posts have since been shared thousands of times.

Belgian dignitaries, like King Philippe, Chief Rabbi Albert Guigui and national Muslim board president Salah Echallaoui, have visited him in the hospital.

The religious leaders together visited Benjamin on April 3 in response to a call he made on Facebook for unity and reconciliation between the Jewish and Muslim communities of Belgium. Benjamin has also been interviewed by the RTBF Belgian broadcaster, the Channel 2 news channel in Israel and The Associated Press, which called him “the voice of the wounded.”

Benjamin, a 47-year-old matchmaker for a dating agency, was on his way to visit his 16-year-old daughter in Israel when he was hit by the second of two explosions at the airport. The Islamic State claimed credit for the attack.

Along with chronicling his convalescence, Benjamin has since criticized the government’s failure to prevent the attacks but expressed confidence in Belgian society’s ability to transcend them.

“Together, we will labor so that our two communities will move things toward a unified Belgium,” he wrote about Belgian Jews and Muslims.

Benjamin wrote his life was saved by Belgians who make up a portrait of “our beautiful country,“ including a Muslim airport technician, Hassan Elouafi, who let Benjamin call his mother immediately after the attack to tell her he was alive; a Flemish soldier who stopped Benjamin’s bleeding, and an ambulance crew paramedic, Louis, who got Benjamin to the hospital on time and kept him conscious by talking to him all the way.