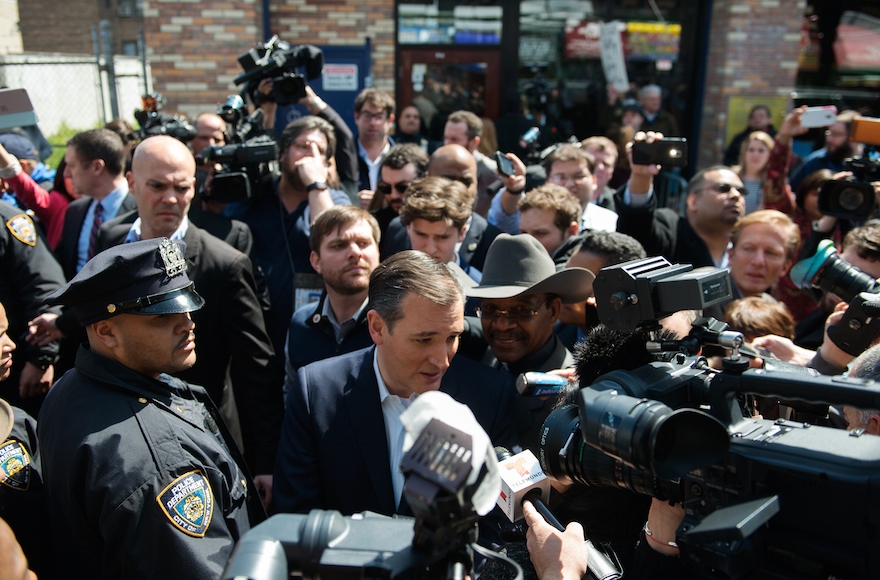 Ted Cruz speaking to the media outside the restaurant Sabrosura 2 in the Bronx borough of New York City, April 2, 2016. (Bryan Thomas/Getty Images)
Advertisement

Ted Cruz has a lot of catching up to do when it comes to the New York presidential primary.

After his big win Tuesday in Wisconsin, the senator with the Texas twang is trailing Donald Trump in the polls. He didn’t make many friends in the state when he derisively referred to the celebrity businessman and Queens native’s “New York values” back in January.

But here’s one thing that plays in super-Jewish Brooklyn: matzah baking.

Cruz will be dropping by the Chabad Neshama Model Matzah Bakery Thursday afternoon before heading over to the Jewish Center of Brighton Beach to put in an appearance (cue the Klezmer music).

Nothing says New York retail politics like matzah baking. With New York hosting its first competitive presidential primary since 1988, and with the good fortune of the primary landing right before Passover, the timing’s perfect.

Normally, presidential campaigns pass through New York only during general election time in November, when candidates must make do with pastrami on rye (and collecting millions from Wall Street donors).

If Cruz is smart, his Jewish peeps have prepped him for his afternoon in heimisch Brooklyn. He’d be wise to drop a few words in Russian at the Jewish center (Brighton Beach is home to a large Russian-Jewish immigrant community), avoid asking for hot sauce to dip his matzah in and refrain from asking the Chabad rabbi where he got that funny lookin’ cowboy hat.