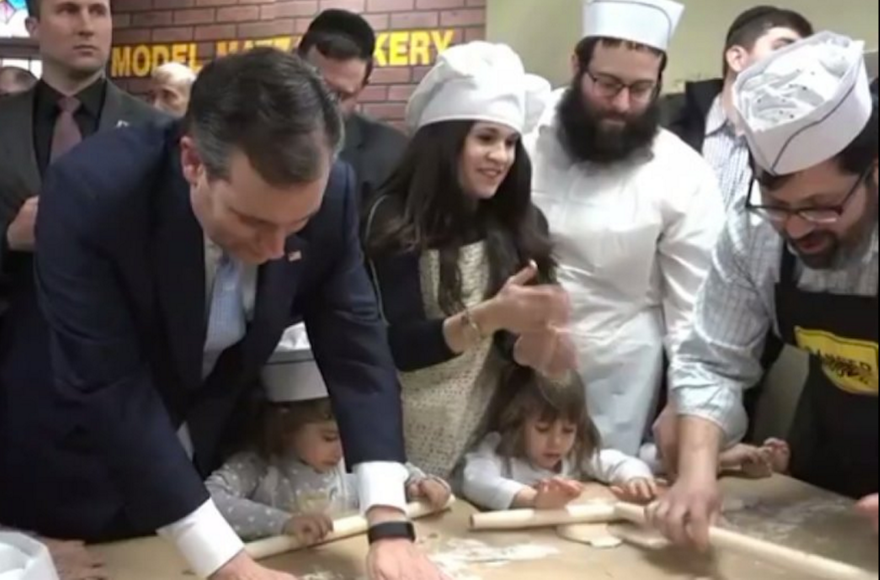 Have you heard one about the Texas senator who walked into a matzah bakery?

If there wasn’t a go-to joke for the situation before, Twitter generated several contenders — along with plenty of commentary — in honor of Ted Cruz’s appearance Thursday at Model Matzah Bakery in Brooklyn.

Ahead of the New York presidential primaries, the senator from Texas and Republican presidential hopeful helped local children make the unleavened Passover bread. His cowboy hat nowhere in sight, he sang “roll, roll, roll the matzah dough” and “Dayenu” with the rabbi and other members of the Chabad-Lubavitch Hasidic community of Brighton Beach.

Local Jews who showed up loved it and started a chant of “Jews for Cruz!”

At @tedcruz‘s stop at a Matzah Bakery in Brooklyn, kids chanted “Jews for Cruz!!” as he left: pic.twitter.com/q7ihoBZV76

But many Jews on Twitter took the opportunity to point out the irony of the “New York values” critic taking part in such a Jewish New York activity.

Some made matzah puns.

Others cracked Jewish jokes, including an insider reference to the 18-minute baking time limit on kosher matzah.

To grow his appeal among Jewish NYers @tedcruz visited a matzah factory yesterday. At 10am today he’ll seal the deal with his bris — Michael Andreozzi (@modestypictures) April 8, 2016

Ted Cruz is touring a matzah factory in Brooklyn tomorrow. Makes sense- people who deal with him can’t handle it for more than 18 minutes. — Juff (@juffyd) April 6, 2016

One Twitter user even harkened back to Cruz’s controversial refusal Monday to wear a cheesehead hat at a Wisconsin rally. Perhaps girded by his sweeping victory in that state’s primary the next day, he also turned down an offer Thursday to wear a matzah-baking hat. (His supporters still donned customized Cruz-styled yarmulkes.)

I am willing to bet that Ted Cruz is less enthusiastic about matzah than about cheese — Ben Jacobs (@Bencjacobs) April 6, 2016

Cruz visits matzah factory. Complains that because of zealous regulators, it’s only busy two months of the year. https://t.co/DwAXBx99fP

(Full disclosure: Silow-Carroll is JTA’s editor in chief.) Cruz is trailing Republican front-runner, Donald Trump, a Queens native and local real estate tycoon, in the New York polls, as well as the overall delegate tally. But he isn’t backing down from his criticism of “New York values” — even after the New York Daily News told him to ride the “F U” train on its front page Thursday.

“Look, I have never been popular with left-wing journalists or tabloids, and frankly that’s not my target audience” Cruz told CNN Thursday.

Meanwhile, in the other party, the most Jewish New York moment so far belongs to Brooklyn native Sen. Bernie Sanders, I-Vt., who is trailing Democratic presidential front-runner Hillary Clinton nationally and in New York polls. On NBC’s “The Today Show” Friday, the only actual Jew in the race gave an enthusiastic answer to a perennial Jewish deli food dilemma.

It was the perfect question for Sanders, since his manner of speaking has often been compared on Twitter to a man ordering food at a deli counter.

I can never tell whether Bernie Sanders is doing a stump speech or standing at the deli counter.

Bernie Sanders sounds like an old man trying to send soup back at a deli. Love it.

Bernie Sanders: Old man angry about the price of pastrami at a deli. Hillary Clinton: Grandma trying to cool with the kids. #EqualTime.