NEW YORK (JTA) – How was Helene and Bob Fine’s family seder in 2000 different from every other Passover night?

First lady Hillary Clinton and her daughter Chelsea came. (President Bill Clinton would have joined, too, if not for Yasser Arafat, but we’ll get to that.)

This was no political or community institution event. It was a genuine family seder at the Fines’ home with about 15 people, all family and friends, held on Passover’s first night. Helene made her traditional brisket and tzimmes, there were no photographers present and the Clintons stayed for hours, the Fines recalled in interviews this week with JTA.

“She didn’t want publicity from it,” Bob Fine said. “She was real, she was personal, she participated in everything. She was one of the best seder guests we’ve ever had. Chelsea, too.”

At the time, Fine was the rabbi at the Conservative Bet Torah in Mount Kisco, the Westchester County village just down the road from Chappaqua,  the New York suburb where the Clintons recently had bought a house in anticipation of Bill Clinton’s return to private life and Hillary’s run for the U.S. Senate from New York. One of the Fines’ sons, Yoni, attended Stanford University, where Chelsea Clinton also was a student. The two moved in the same circles and were friendly.

As Passover approached, Yoni mentioned to Chelsea that his parents lived just a mile or so down the road from Chappaqua and asked if she’d be in the neighborhood for spring break and would like to join them for seder. Chelsea said she’d love to and asked if she could bring her parents. 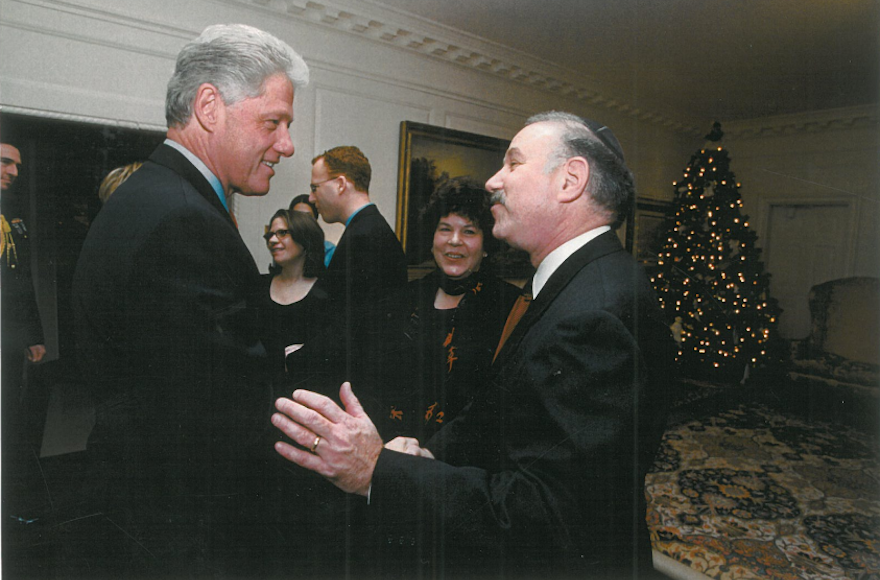 “Well, things can get a little complicated when my father comes,” Chelsea said, according to the Fines’ retelling.

As it turned out, Bill Clinton never made it. Arafat, the PLO leader, was due to be in town, and the president was detained in Washington.

But at the seder, Hillary and Chelsea participated in lively discussions and stayed for about six hours, until around midnight, the Fines recalled.

“It turns out they weren’t going back to Chappaqua that night but to Washington, and they were supposed to leave by a certain time because their plane needed to take off before the suburban airport in the area closed for the night,” said Josh Fine, who was at the seder. “But they were so engaged in the conversation that they stayed about two hours later than they said they could.”

The evening did have a couple of snafus. Helene Fine didn’t know Chelsea was a vegetarian, and the main course was first-cut brisket smothered in onions. Worse, Helene inadvertently made the tzimmes with prunes that had pits. She was forced to watch, with some horror, as the first lady wordlessly removed them by bringing a soup spoon to her mouth, pursing her lips to extract the pit and then neatly lining up the pits on her plate.

“There was such an aristocratic grace to it in not calling attention to it,” Helene Fine said with a chuckle. “I could see she was properly trained in table etiquette.”

There was a bevy of preparations before the Clintons arrived. The Secret Service came to the house to check things out, scoping out the bathrooms, reviewing the guest list, instructing the Fines to leave the shades closed and asking where the food came from.

“My wife looked at them strangely and said, ‘What do you mean?’” Bob Fine recalled. “They said, ‘Who’s the caterer?’ Helene told them, ‘I’m making all the food.’ The Secret Service guy hesitated. Then he whispered into his earpiece: ‘It’s being self-catered.’”

Helene Fine said she didn’t really have time to be nervous about preparing. She was a full-time English teacher and always hosted both seders. Had there been time, Helene said ruefully, she would have bought pitted prunes. 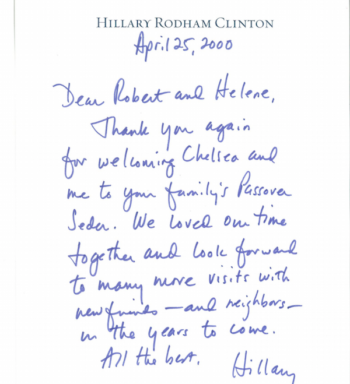 Hillary Clinton’s letter to the Fine family after attending their Passover seder in 2000. (Courtesy of Bob Fine)

The Fines run a pretty traditional seder, with a lot of discussion, plenty of singing and an old-school menu: shmura matzah, gefilte fish, apple matzah kugel, brisket. They dip asparagus in salt water for the karpas course and real horseradish with endive for maror. Their Hagaddah, “The Feast of Freedom,” was the official one of the Conservative Rabbinical Assembly.

During the Maggid section, which recounts the Jews’ oppression in Egypt before their eventual exodus, each participant around the table read a different section. Hillary Clinton had the part about a verse from Deuteronomy that translates as “My father was a wandering Aramean.” She talked about contemporary parallels of discrimination, including the ethnic conflict in Kosovo. Then she did a humorous riff on her own experience with wandering.

“She said, ‘My husband was a wandering politician, we went from Arkansas to Washington, we were oppressed by the press,’” Bob Fine recalled. “She just did a satire of it that was spectacular.”

Though Hillary Clinton said it was her first time ever at a traditional family seder, it was hardly her first Passover. She said that when she was a college student at Wellesley she had helped Jewish friends prepare seders, and as the First Lady of Arkansas and then the United States she had attended numerous communal seder events.

READ: Throughout Hillary Clinton’s life and career, US Jews have been close at hand

The thing that seemed to delight Clinton most, the Fines recalled, was the opportunity it gave her to get to know Chelsea’s college friends who had come for the seder.

“She came more as a mom than the first lady or a Senate candidate,” Josh Fine said.

During dinner, Clinton asked each of the young people around the table what they were studying, where they were from and what they wanted to do after college.

Josh Fine was in his third year of law school at Harvard, and he mentioned that he had submitted a speech as part of applying to be the law school commencement speaker. When Clinton called the Fines a few weeks after the seder to thank them for their hospitality, Josh was surprised to learn that Clinton had inquired about whether he had gotten the graduation speaking gig.

“She remembered details, despite everything she had going on,” he marveled. “She seemed very authentic to me.”

One of the guests at the seder, Barbara Levine, a close family friend who taught at Forest Hills High School in Queens, had the temerity to ask Clinton if she would speak at the school’s graduation ceremony that spring. Clinton assented, and mentioned in her speech that June that it had come about because she met Levine at a seder.

A few months after Passover, the Clintons reciprocated by inviting the Fines to the White House for a pre-Christmas event – along with 500 of the Clintons’ closest friends. When President Clinton shook their hand, he said Hillary and Chelsea told him they had a great time at the seder.

Clinton’s seder visit never made it into the papers. Fine talked about it from his pulpit the next week, but that was pretty much it.

“I wanted to respect her request that she didn’t want any publicity from it,” Bob Fine said. “Her agenda was not a political one. Her agenda was to meet some of the kids her daughter hangs out with at college, and she gave up a whole day in order to do that. That was more important than her own political interests in the state, where she was running for Senate.”

This year, the Fines aren’t expecting any celebrities for Passover. They’ll be in Denver with their children and grandchildren. Helene Fine already has ordered a first-cut brisket from Grow & Behold, the glatt kosher, pasture-raised meat company.

She also may make tzimmes. But this time, no pits.