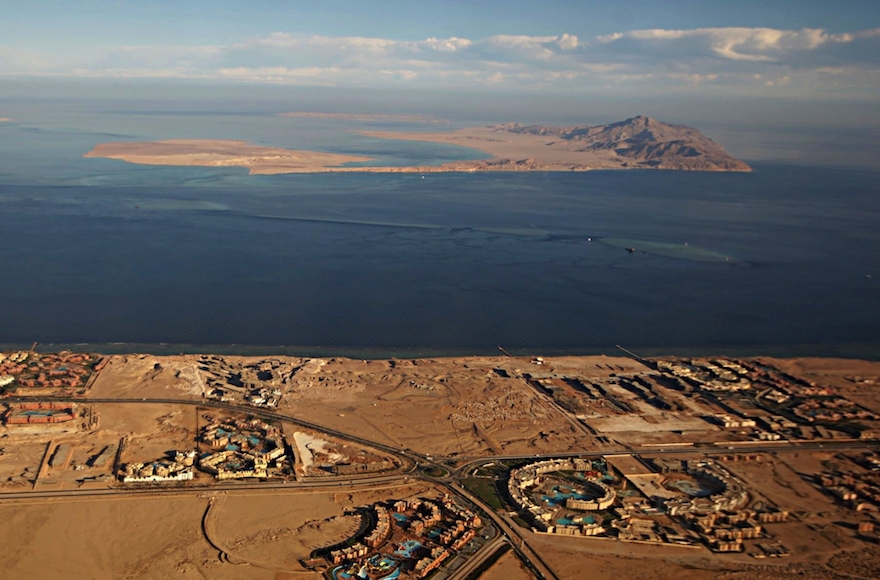 The Red Sea islands of Tiran, in the foreground, and Sanafir, in the background, sit at the the Strait of Tiran between Egypt's Sinai Peninsula and Saudi Arabia. (Stringer/AFP/Getty Images)
Advertisement

Egypt agreed to hand over the islands, which it has controlled for more than 60 years, as part of a deal to build a bridge over the sea between the two countries that was announced during a weekend visit by King Salman of Saudi Arabia.

The deal had raised questions about Israel’s continued access to the passage, the revocation of which was a casus belli of the 1976 Six-Day War between Israel and its neighbors. But Defense Minister Moshe Yaalon said Israel was consulted early in talks over the deal and gave its consent.

“An appeal was made to us – and it needed our agreement, the Americans who were involved in the peace agreement and of the MFO,” Yaalon said, referring to the Multinational Force and Observers peacekeeping forces at the Israeli-Egyptian border. “We reached an agreement between the four parties – the Saudis, the Egyptians, Israel and the United States – to transfer the responsibility for the islands, on condition that the Saudis fill in the Egyptians’ shoes in the military appendix of the peace agreement.”

In a document given to Israel, Saudi Arabia, which does not have formal relations with Israel, pledges to abide by the principles that have governed Israeli-Egyptian relations since their 1979 peace treaty, Haaretz reported. According to the treaty, the Straits of Tiran and the entire Gulf of Aqaba are international waterways open to free passage by Israel and overseen by the international observers.

Israel also agreed to the construction of a bridge between the islands and the Egyptian and Saudi mainlands.

The islands being relinquished to Saudi Arabia, Tiran and Sanafir, stand sentry at the entrance to the Gulf of Aqaba. The Straits of Tiran are Israel’s only water passage from Eilat to the open sea.