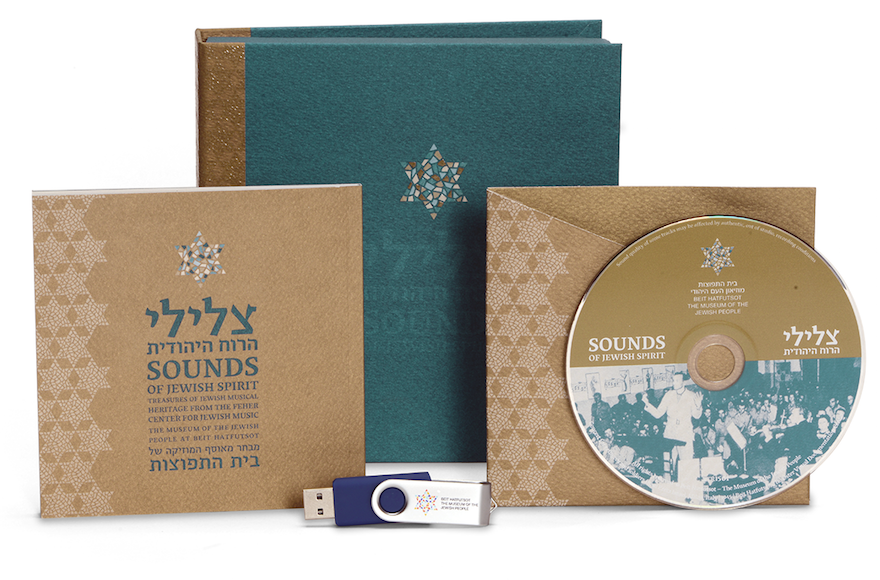 TEL AVIV – Tel Aviv is arguably the startup capital of the world — so, at the outset, a story about a new technology initiative might not sound particularly surprising.

But this particular startup is located inside the venerable Beit Hatfutsot-Museum of the Jewish People, an institution that has been archiving and exhibiting the story of Jews across the globe for nearly 40 years.

Unlike the bootstrapping tech hubs that line the city’s Rothschild Boulevard or cluster together along Harakevet Street and Montefiore, this startup isn’t focused on R&D or social-media technology. Here at the Museum of the Jewish People, all of the energy and buzz is devoted to saving the strains of ancient Jewish music.

Its mission is simple: Save the sounds of Jewish music before they die out with the demise of vinyl and cassette.

Inside the museum’s Feher Jewish Music Center is one of the world’s largest archives of Jewish music. The center — a treasure trove for lovers of Jewish song and lyrics — has been collecting and preserving the global musical heritage of the Jewish people for more than 30 years. But today, with that heritage locked into decaying technologies of vinyl records and magnetic cassette tapes, the museum is on a mission to transfer its sounds online, where it can be safely stored for future generations.

It’s a gorilla of a process – extracting the sounds of history from old technology and shuttling it safely across a digital highway to a more secure future. So Nurit Gazit, the museum’s chief digital officer, has recruited a small army of tech-minded workers who are up to the task.

Most museums hire an external high-tech firm to handle their online or digital tasks, but Beit Hatfutsot didn’t want to go that route.

“When I joined Beit Hatfutsot about 2 1/2 years ago, there wasn’t much online activity happening in house,” says Gazit, who spent decades working within the Israeli high-tech scene. “But together with management, we decided that online activity is a core business, and you shouldn’t outsource core business. So we decided to go in-house, and we built a team who come to work here every day, just like every other startup, and create technologies and products together.”

The Feher Jewish Music Center consists of more than 25,000 pieces of Jewish music from across the Diaspora. There are songs in Ladino, liturgies in Hebrew, ditties in Yemenite Arabic, Yiddish, Polish and German. Locked inside their melodies is the whole history of the Jewish people, from its traverse through exile toward the Holy Land, its pre-Holocaust glory and its from-the-ashes rise after, and all of the traditions, tongues and travels that marked its evolution in between.

Over the years, the center has produced several CDs documenting the history of the Jewish people through music. There is the “Love of Hadassah” album, in which a group of Yemenite Jews were brought into Beit Hatfutsot to record the traditional hymns of the Jewish community which once flourished in that now war-torn nation. There is Rabbi David Buzaglo’s album of Andalusian music, better known as the musical tradition of the Jews of Morocco. There is the rare double CD that contains inside it a recording, made in 1928 Berlin, of a Reform Jewish community singing its Shabbat and High Holidays prayers.

READ: Bob Dylan’s life and work examined in a new exhibit at the Museum of the Jewish People

To fund the massive digital undertaking, the museum is sponsoring a crowdfunding campaign — check it out here — that it hopes will raise $250,000 to cover the three necessary components to get the music catalogued, data-tagged and fully online. These are equipment to transfer the music, professional experts to handle the sound quality and research required to accurately identify the music, and finally the specific technology for delivering the data from the hard copies onto the Beit Hatfutsot website.

The campaign will launch on April 18. The museum hopes to reach its goal within two months.

Contributors to the crowdfunding campaign will be able to sample the sounds themselves — they receive digital links to the campaign’s Jewish music collection. Donors of $360 or more will also receive a physical box set of the CDs containing the music.

After Beit Hatfutsot raises the funds to complete the library’s digitization, the museum will launch the next phase of the project: opening up the database so that listeners and music lovers can add their own liturgical traditions, and hopefully offer up snippets of musical history from their own family libraries and records.

“This part is so important,” Gazit says. “If your grandfather is the last one from his community who can still sing the specific song from his community, we definitely want you to be able to upload it and add it to the library to enrich the database. We want this project to be alive and to grow, and we are certain people are going to provide treasures.”

For now, Gazit spends each day working at her startup within a museum in search of her own little treasures.

“I remember when I was young and visited my grandparents, my grandfather always hummed Russian folk songs,” she says. “I haven’t heard these songs in years, but if I were to stumble across them in the library today, I know I would recognize them. And it’s for those sorts of moments that we are doing this project.”