3 items that say Passover: Which do you choose? 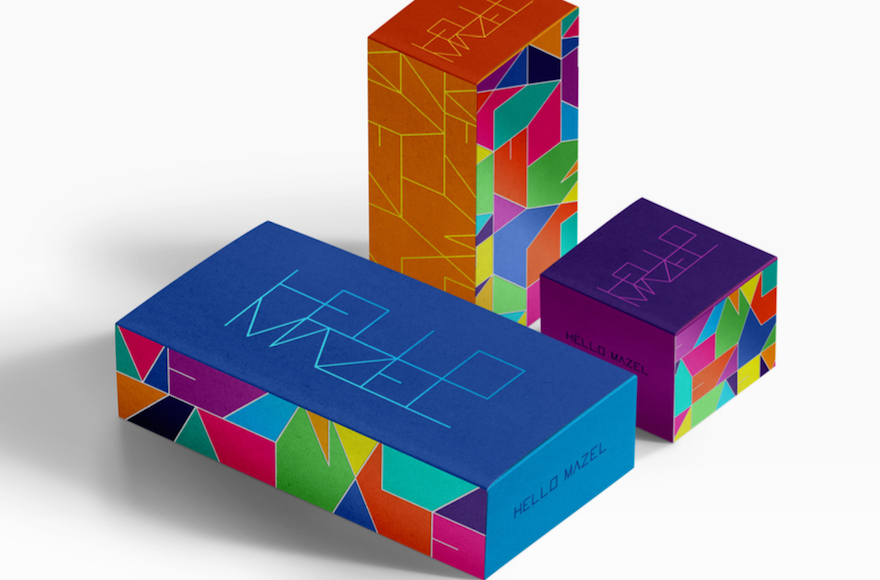 Investors who pledged a minimum of $45 received a Hello Mazel box containing “three twists on the tastes of Passover." (Screenshot by Edmon J. Rodman)
Advertisement

LOS ANGELES (JTA) — Can the essence of Passover fit into a box? Fans of Manischewitz and Streit’s will undoubtedly answer, “Yes, in a matzah box.”

But a successful Kickstarter campaign called Hello Mazel aims to reinvent that box, promising a package filled with Passover-related “Jewish awesomeness” that will be delivered to your door (or someone else’s).

Investors who pledged a minimum of $45 received a box this month containing “three twists on the tastes of Passover, a Haggadah like none you’ve ever used, and a seder plate that is not a seder plate,” says the enigmatic pitch.

Thinking inside the box, I wondered what would go into a box of my own creation. Perhaps a jar filled with the essence of full-strength maror to revive them to the awe of liberation. Also a seder clock; one that doesn’t mark the time but rather the steps of the seder, so that people who had wandered off could find their place. Also, something to clean wine stains from my shirt — that alone would be worth 45 bucks.

I already have plenty of packaged Passover foods that twist my insides, a box of Haggadahs I only use once a year and so many seder plates we have a “discussion” each Passover on which one to use. So I was curious about what Hello Mazel was really offering. Was it basically just a Jewish take on the trendy subscription boxes of artisanal what-have-you? Or was this a box that could also feed the soul?

Most of all, I wondered: What could a box filled with Passover stuff do to actually bring Jews together?

READ: 5 seder supplements to make your Passover relevant this year

To get a better understanding of the Hello Mazel’s Passover box — one of four promised packages that Hello Mazel plans to deliver this year — I spoke with Yoav Schlesinger, executive director of The Kitchen, the San Francisco-based, rabbinically-led spiritual community that is putting the project together.

The Kitchen, which describes itself as “a religious startup,” says on its web site that Judaism is about “provoking awe and purpose.”

To that end, they had to “rethink what might go in a box of Jewish stuff,” Schlesinger explained. As a goal, they wanted something that was “unexpected and inspirational,” he said.

For now, the item-by-item contents of this “highly designed” box remain known only to the Kitchen. However, speaking about the box’s mix of food, ritual object and text, Schlesinger says he hopes the food will provide an entry point to the Jewish content, and the Jewish content will provide a “framework in which to understand why the foods are relevant.”

Moving beyond “symbolic ethnicity” — a term coined by sociologist Hebert Gans describing a nostalgic relationship with Judaism that relies on a “love for and pride in a tradition that can be felt without having to be incorporated in everyday behavior” — Schlesinger said one question driving the project was: “How do we get Torah to more people and into more people’s hands?”

As an answer, The Kitchen’s crew created a Haggadah, a prototype of which Schlesinger and others successfully tested at their own seders last year.

“We reinvented and re-engineered a way of telling the Passover story, which is what the seder and Haggadah are meant to do,” he said.

The Haggadah could serve as either a supplement or a replacement, Schlesinger added.

“For a seder newbie it certainly would be an appropriate first-level, Haggadah-like experience,” he said.

READ: Go on, treat your Passover seder host. Here’s how.

As for the seder plate, its design has them reaching creatively, looking for a way to present something that is “heavy, expensive and beautiful” in a box that’s 10 by 12 by 4 inches (and also needs to contain the rest of the offerings).

Long accustomed to my table’s round seder plate, I began to picture how a new form might add difference to this night of distinctions. Would it be in the form of a hand? Would it come like a jigsaw puzzle for those seated at the table to solve?

The food items are “kosher style,” so Schlesinger acknowledges the box “is not going to be for everyone.” He also realizes its limitations. He isn’t sure, for instance, that the hope of opening the box at the seder table and “it releases magic” is a reasonable expectation, Schlesinger told me. What is reasonable, he said, is that it will create “some inspiration.”

“What about putting an inflatable rabbi in the box?” I asked, jokingly wondering what kind of magic I needed to keep everyone’s attention at my own seder table.

Unfazed, Schlesinger, whose father is a rabbi, liked the idea — he said it reminded him of the popular novelty known as “snakes in a can.”

Yet I still wondered how even a brilliant new Haggadah could hold everyone’s interest — especially that of a generation used to doing practically everything online.

Schlesinger responded that Judaism — contrary to recent attempts to project it into virtual communities — has always been about the senses, the “tactile” experience of “touch, feel and taste.”

“What is a moment we can share?” he asked. “Not just a digital space”; how do we “recapture the experiential moment?”

Opening a box — whether filled with objects from Hello Mazel or from our own imaginations — might just be the way.