How New York, and its Jews, sets the stage for a Clinton-Trump showdown 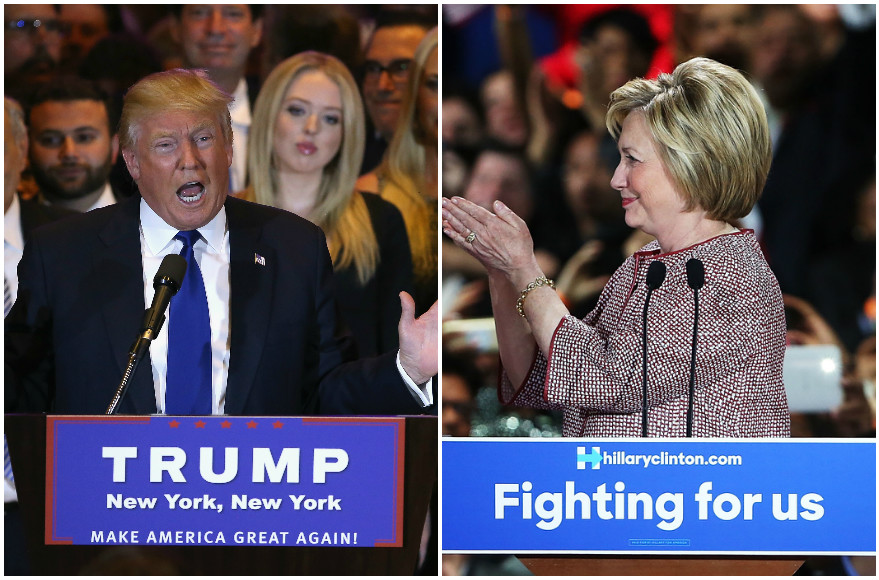 WASHINGTON (JTA) — Hillary Clinton and Donald Trump have reason to allow their New York state of mind to coast for another week or so.

The next set of contests, on April 26, echoes the demographics and polling that spurred them to victory in New York state on Tuesday.

And large Jewish communities in Pennsylvania, Maryland and Connecticut could play the same role in Clinton’s path to inevitability that they likely played in New York, bolstering her bid to secure the Democratic nomination and sideline the insurgent campaign of Sen. Bernie Sanders, I-Vt.

The former secretary of state grabbed a daunting lead over Sanders with an easy victory in the New York City area, where much of the state’s Jewish population lives.

Sanders, the only Jewish candidate to have won nominating contests for a major party, may have hurt himself among Jewish voters when he clashed with Clinton on Israel during a debate last week in Brooklyn. He challenged Clinton to show more evenhandedness to the Palestinians and to criticize the government of Israeli Prime Minister Benjamin Netanyahu.

Also likely not helping: His hiring then firing of Simone Zimmerman as his Jewish outreach director within a week. Zimmerman was suspended after JTA broke the news of her hiring and reported on her agitation against Israel’s occupation of the West Bank, and after others reported on Facebook posts in which she used obscenities to disparage Israeli Prime Minister Benjamin Netanyahu.

In Pennsylvania, Connecticut and Maryland, Jews don’t make up as much of the population as they do in New York. About 10 percent of New York state’s population is reckoned to be Jewish, while the number hovers around 3-4 percent in the other Eastern states. Also going to the polls on April 26 are Rhode Island and Delaware.

But Jewish voters are known to turn out to vote, and the upcoming states share other demographics that helped Clinton on Tuesday night, including major urban areas and large African-American and Hispanic populations. Aggregates of polling in the three larger states on the RealClearPolitics website show Clinton substantially leading Sanders in all three.

A total of 462 delegates are up for grabs in the Democratic contests next Tuesday.

The victory in what is now Clinton’s home state pushed her number of pledged convention delegates to 1,436, and she also has the support of 469 superdelegates. The total of 1,905 has Clinton nearing the 2,383 delegates needed to win the nomination. Sanders has 1,192 pledged delegates and 31 superdelegates.

Trump can look forward to similar favorables in the upcoming Eastern states, which have same-day Republican contests collectively worth 172 delegates. The RealClearPolitics aggregates show Trump leading in all the states, and he has done well in the Northeast and among blue collar Republican voters.

Delaware, Maryland and Pennsylvania have winner-take-all or winner-take-most contests, which is good news for the real estate billionaire, who is the front-runner, and his hopes of winning the necessary majority of delegates – 1,237 – to avoid a contested convention.

His victory in New York brings him to 844 delegates, followed by Texas Sen. Ted Cruz at 543 and 147 for Ohio Gov. John Kasich.

Cruz and Kasich are focusing their campaigning on Pennsylvania, where conservative evangelical whites in the state’s center are seen as Cruz’s natural hunting ground, and where Kasich will tout his governorship in neighboring Ohio and his birth in Pennsylvania.