In Nevada, an open House seat, a Jewish front-runner and a Muslim candidate who feels dissed by his party 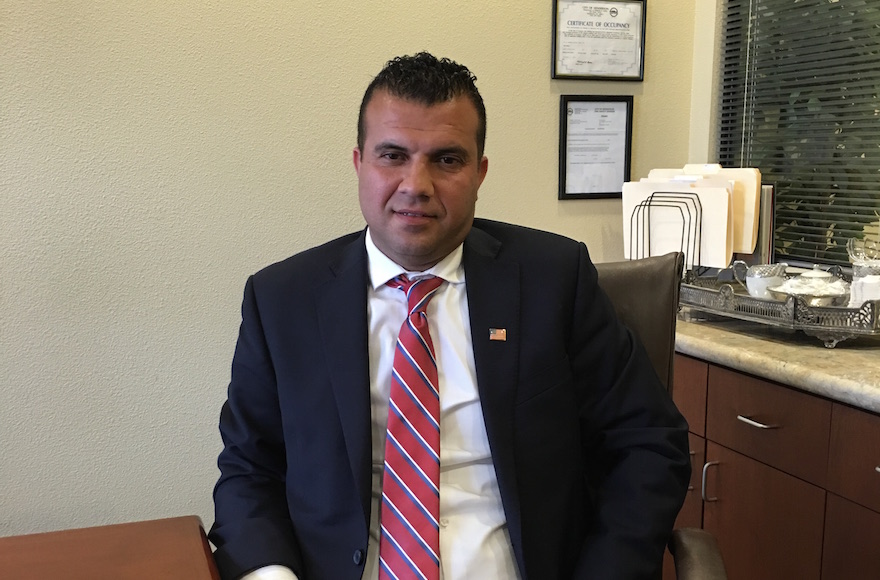 A Jordanian-American lawyer says her win would be at his expense, and it’s because of his Muslim faith.

But Jesse Sbaih isn’t blaming Rosen. Rather he is blitzing the Nevada media with his claim that Sen. Harry Reid, D-Nev., the Democratic boss in the state, counted him out of the race in Nevada’s 3rd Congressional District because he is a Muslim.

Sbaih was more than happy to present his argument to JTA, and at no point suggested that Rosen – who was ultimately Reid’s pick in the bid to replace Joe Heck, a Republican whose run for Senate leaves his seat open – was selected because she is Jewish. Instead, he said, Reid was simply seeking someone who was not Jesse Sbaih.

“‘Let me be blunt, you can’t win this race because you’re a Muslim’,” Sbaih quoted Reid as telling him last August when they met at a Las Vegas hotel.

Reid’s office acknowledges the meeting but flatly denies that Sbaih’s religion came up.

“We have said many times that Jesse is not telling the truth,” Kristen Orthman, the senator’s spokeswoman, told JTA.

Sbaih remains in the running for the June 14 congressional primary, but Reid’s full-throttled power is behind Rosen. Reid is retiring this year and wants to leave his mark on the state. Heck’s open seat is an opportunity – President Barack Obama won the district in 2008 and 2012, albeit by relatively small margins.

Sbaih, speaking to JTA in the boardroom of his law firm’s office in a strip mall, said Reid’s machine has cut off access to Democratic consultants who could help him. Much of his campaign is self-funded.

He says he is running to give back to the community — he arrived in the United States with his parents when he was 11. He has endorsed the presidential campaign of Sen. Bernie Sanders, I-Vt., who is running a campaign emphasizing income inequality – and who incidentally is the first Jewish candidate for a major party to win nominating contests. (Sanders lost Nevada, but by a small margin, to Hillary Clinton.)

“I believe in the goodness and the spirit of the American people,” Sbaih said. “There are serious issues facing our community. In this district of 744,000 people, we have 64,000 people living below the poverty line.”

READ: How the mayor of Las Vegas succeeded her husband, the Jewish ‘Donald Trump’

Did Reid bring up Sbaih’s faith? It comes down to he said/she said – quite literally.

Two weeks before meeting with Reid, Sbaih met with Rebecca Lambe, a political consultant to the senator. Sbaih said she was the first to suggest his faith could be an obstacle. Orthman referred JTA to Lambe’s statement last month to the Washington Post, when she said she raised a number of issues in that first meeting, including his religion, “to more fully understand the path and potential attacks from the other side.”

Sbaih showed JTA a series of texts he sent to Lambe after his Aug. 25 meeting with Reid, in which he candidly discusses whether he should suspend his campaign because of his “ethnicity/religion.” Lambe did not immediately cut him off – she refers to a possible federal appointment that Reid’s team discussed with Sbaih – so she does not appear to be put off or surprised by his reference to his religion or its political implications.

However, Sbaih’s references to his faith in the texts could refer to his earlier conversation with Lambe and not to the conversation with Reid. It is also not clear from the texts if she straight out said being Muslim would be a problem, or if he simply inferred that from her saying that he should anticipate attacks because of his religion — which she acknowledges.

What’s also not explained is why Democrats would fear running an Arab American or a Muslim for office. Multiple Arab Americans from both parties have served or are serving in Congress, and there are two Muslim Democrats from the Midwest — Sbaih would be the first member to be both Arab American and Muslim.

(Sbaih and Rosen are far and away the best funded in a six-candidate Democratic field. Another three Jewish candidates are vying for the Democratic nod, although they have yet to raise significant amounts of cash: Alex Singer, an activist who has endorsed Sanders; Steve Schiffman, an attorney who has lived in Israel; and Barry Michaels, who on his website promises to be a “loose cannon” in Congress, and admits to having once served time for a tax and securities violation. According to OpenSecrets, there are eight candidates running for the Republican nod, and two third party candidates.)

Where Sbaih has ammunition, however, is in the claim by Reid’s team that the senator simply wanted Sbaih, 40, to gain seasoning – through the statehouse or federal government work – before running.

“Senator Reid said, ‘You have a future, you should look at running for state Assembly or state Senate,” Orthman said. “That was the crux of the meeting.”

The problem with that argument is that Rosen also was not a known quantity. Reid, according to veteran Nevada politics reporter Jon Ralston, had hoped to find a “big name” before settling earlier this year on Rosen.

Why didn’t he go back to Sbaih, who was still asking to be considered?

“She’s been a community leader for years, she’s known in the district she’s running in,” Orthman said, referring to Rosen.

Sbaih says his work specializing in consumer rights lends him a high profile, which is burnished by his physician wife Sameera’s busy family practice in this suburb of casinos, resorts and strip malls.

The Rosen campaign deflected multiple requests by JTA to meet or interview the candidate. A video of her April 19 appearance at a town hall for the LGBTQ community shows a confident and warm speaker, albeit with name recognition issues. The group, the Stonewall Democratic Club, prepared a label for her as “Jack Rosen,” which she successfully turned into a joke.

She told the crowd she was fighting for “the freedom to be your authentic self, go to the bathroom wherever you choose, thank you very much — you can be Jack or Jacky Rosen,” she said, nodding at the label and earning appreciative laughter.

Regarding her leadership experience, all she cited was her presidency of Ner Tamid, a Reform synagogue here and the largest shul in the region. She noted the synagogue’s use of solar panels to conserve energy and said she balanced a budget of $2.5 million a year.

Otherwise, Rosen appeared to lack preparation, eager to avoid wonky topics and to focus on a feel-good message.

“We can talk about energy and education and economics, but what’s most important is to talk about is empowerment,” she said.

An accountant asked her about taxing carried interest. Rosen seemed at sea.

“I have looked a little bit at the carried interest,” she said, “but you can go ahead and explain it.”