Can you help a kibbutznik find his American relatives? 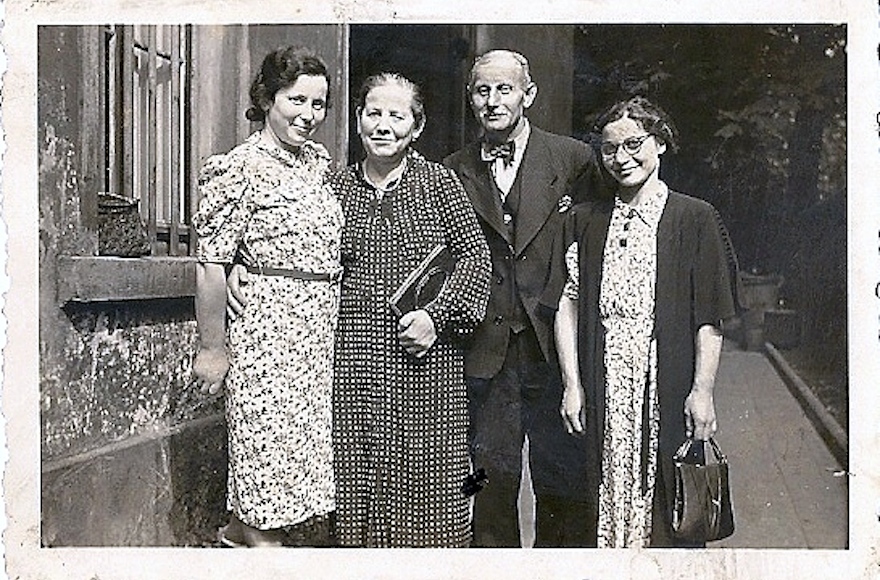 David Harel’s paternal grandparents, Irma and Gustav, are shown here in May 1939 with two of their six children: Irma, left, and Resha. (Courtesy of David Harel)
Advertisement

(JTA) – “If only” – it’s the most common regret expressed by “Seeking Kin” interviewees, and by genealogists generally.

David Harel has dug into his family’s history impressively, but second-guesses himself for never asking his late father, Yaakov Halberstadt, key questions before Yaakov died at 96 in 2010, or for not pressing to address other mysteries.

Harel, 74, who lives on Kibbutz Yavne, near Israel’s Mediterranean coast, wants to locate relatives who settled in the United States more than a half-century ago. Where they settled, he doesn’t know.

The relatives are the descendants of Itta (or Ida) Hermann, nee Rothschild, and her husband, Sigmund. Itta was the sister of Harel’s paternal grandmother, Bertha Halberstadt. They had three other siblings: Hedwig, a 2-year-old who died in 1873; Bernard, born May 15, 1872; and Lina, born on Dec. 3, 1874, and died on April 1, 1923.

In about 1935, the Hermanns immigrated to Johannesburg, South Africa, from the German village of Hochst an der Nidda, near Frankfurt. At some point – Harel thinks in the 1950s or ’60s – the Hermanns all moved to the United States with their daughters Bertel and Selma and sons Ernst and Julius.

Harel hasn’t a clue where they lived in America, in what professions they worked, the names of the children’s spouses or the names of anyone in the next generations. He knows Bertel was married on Oct. 2, 1937, but doesn’t know her married name.

Bertha and her husband, Harel’s grandfather Gustav Halberstadt — his Hebrew name was Gershon — were murdered in the Holocaust. Gustav had run a business selling farm equipment.

READ: At an Israeli moshav, filling in the blanks on a WWII rescue effort

Yaakov and his five siblings (another sister, Frieda, died in infancy) had fled from Germany – the three boys settled in prestate Israel, the three girls in Manchester, England – within about a year of Kristallnacht, the orchestrated pogroms across Germany and Austria in early November 1938. During Kristallnacht, Yaakov’s two brothers – his twin Leo and Irving – along with Gustav were arrested and detained in Dachau and Buchenwald before being released.

From South Africa, the Hermanns wrote to Bertha regularly, with each person contributing a paragraph or two. Bertha passed along some snippets or the whole letters when she wrote to Yaakov, who had moved to prestate Israel in 1936. The correspondence yielded rich information about Harel’s grandparents’ struggles during the Nazi period, along with facts about the South Africans.

Harel knows that one of the latter’s Johannesburg addresses was on David Street, in 1937; another was 123A Terrace Road, in 1938.

Oct. 10, 1937: “Through your Aunt Itta, we today bought only 15 pounds of meat, including bones, because she sent less [money] than usual,” Bertha wrote to Yaakov.

Jan. 2, 1938: “We received a letter today from Itta. Selma has gotten engaged. They moved residences to a further-out suburb.”

These quotations come from the more than 100 of Bertha’s letters that Yaakov saved. Whenever David and his sister Rachel asked about the letters, Yaakov wasn’t forthcoming.

Shortly before Yaakov’s death, Harel noticed a box atop a cabinet in his father’s apartment on Rabbi Chaim Berlin Street, in Jerusalem’s Rechavia neighborhood. David and Rachel found the letters inside after Yaakov died. They figured he’d moved the box there so it’d be found.

David photocopied the letters and donated the originals to Israel’s national archive. He hired someone to translate them from German, but still, “the text is filled with question marks of what I don’t know.”

A retiree of the kibbutz’s hatchery, Harel took five of his grandchildren in September to his ancestral village, which he’d already visited six times, including twice with his parents. So small was the place that its Jewish population consisted of two extended families – nearly all the men being kohanim, members of the traditional priestly class.

That’s why, he said, Hochst an der Nidda was dubbed Kfar Hakohanim, or priests’ village.

“I wanted to show them the places, the buildings, the synagogue structure, the cemetery. If I didn’t take them, who would?” Harel said. “When my soul returns to the Holy One, blessed be He, no one will know where these places are. It was important to me that my grandchildren know.”

Tanya Klein’s application to the Holocaust-commemoration institution on behalf of Lowenbraun, her mother, was the subject of a “Seeking Kin” column in 2014. Larose and her daughter Marguerite had hidden Lowenbraun on the elder Larose’s farm in the village of Villers-Poterie.

READ: For her mother’s rescuer, a Baltimorean bids to Yad Vashem

Klein, a Baltimorean, attended the ceremony along with Lowenbraun, who lives in a Jerusalem nursing home. They also flew in Angele’s nephew, Andre Larose, and his wife, Veronique, from Belgium.

“I’m so happy,” Klein said. “I have such a sense of completion that the mission I started five or six years ago – to find the people who saved my mother and thank them – has now ended with their names being preserved for posterity, eternally inscribed at Yad Vashem for everyone to see.”

She added, speaking of “Seeking Kin”: “It’s all thanks to you. You said, ‘You should call Yad Vashem and get this going.’ So I did, and look what happened!”

(Please email Hillel Kuttler at seekingkin@jta.org if you know the whereabouts of the Hermann clan with roots in Hochst an der Nidda, Germany. If you would like “Seeking Kin” to write about your search for long-lost relatives and friends, please include the principal facts and your contact information in a brief email. “Seeking Kin” is sponsored by Bryna Shuchat and Joshua Landes and family in loving memory of their mother and grandmother, Miriam Shuchat, a lifelong uniter of the Jewish people.)