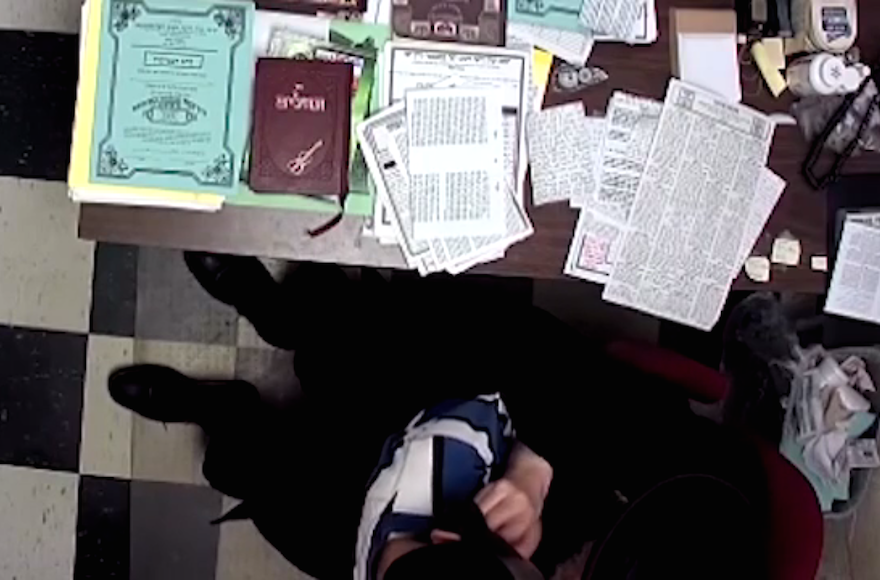 NEW YORK (JTA) – The story is an all-too-familiar horror tale: An adult in a position of power – in this case a Hasidic school principal – is accused of sexually abusing a child in his care.

But one thing makes this episode very different: The encounter was captured on a hidden camera and posted online this week for all to see.

Difficult to watch, the 11-minute clip offers a rare glimpse of what an incident of this sort actually looks like rather than as it may be refracted through memory days, weeks or years later in court, in the media or in the privacy of a therapy session.

The video, which is now being probed by police, was first widely circulated Saturday night on the messaging service WhatsApp and later posted on Facebook in an abridged form before being removed by administrators. It shows an older, bearded Hasidic man taking his seat in a small office and then pulling a young boy with peyos sidecurls between his legs.

Over the course of several minutes, the bespectacled man wearing a black hat caresses the boy, jerks him back and forth, and appears to kiss him repeatedly and rub against him. At one point the boy tries to escape the man’s clutches but is grabbed back. Both remain fully clothed throughout the encounter. A volume of Deuteronomy, a book of Psalms and other religious tomes lie on the nearby desk.

Filmed from an overhead camera without audio, the video shows neither the man’s nor the boy’s unobstructed faces. The boy, who has a closely shaved head under his black velvet yarmulke, looks to be anywhere from 5 to 9 years old.

Activists say the man is a principal at the main yeshiva in Kiryas Joel, a Satmar village located within the Town of Monroe in New York’s Orange County. The K-12 yeshiva, United Talmudical Academy, has some 6,000 students, according to school resource websites. A message left by JTA with administrators at the school on Tuesday was not returned.

State police are investigating the incident, according to the Journal News, the local paper that first reported the incident.

Christopher Borek, the chief assistant district attorney for Orange County, said his office had received a copy of the video but declined to say whether or not the incident is under investigation.

“I can tell you that in general our office treats all allegations of sexual abuse of children as extremely serious,” Borek told JTA, noting that a designated unit handles such allegations. “We never comment on investigations even to confirm if the investigation is ongoing or not unless or until charges are filed.”

The encounter at the Kiryas Joel yeshiva allegedly took place before last Yom Kippur and was filmed by someone who planted the hidden camera because he believed kids at the yeshiva were being subjected to inappropriate behavior.

Boorey Deutsch, an activist against sexual abuse in the haredi Orthodox community who shared the video on Facebook, said the person who made the video – whom Deutsch declined to identify — decided to go public with it because local authorities in Kiryas Joel who were shown the recording declined to take any action.

After posting a 36-second clip from the video, which got some 27,000 views before being removed by Facebook, Deutsch was inundated with comments by supporters as well as those who questioned whether the video indeed shows any sexual abuse. Skeptics said it could be an innocent encounter between an administrator showing affection for a student who required either special attention or discipline.

“Some people said: ‘That’s how he showed love and dedication to the children for many years.’ But you do not show dedication and love to a child by kissing him in the face and pulling him into your body. This is inappropriate,” Deutsch told JTA. “There are still thousands of kids under his hands. He can do it again because nobody is taking action — again. It’s our job to stand up. If nobody else will stand up, I will stand up. I will make it happen.”

Deutsch, who grew up in the Satmar neighborhood of Williamsburg, Brooklyn, is a well-known figure in the Hasidic community. His wife was the person who, beginning at age 12, was sexually abused for three years by Nechemya Weberman, an unlicensed Satmar therapist. Weberman was convicted in 2012 on 59 counts of sexual abuse, including oral sex, and sentenced to 103 years in prison. Throughout the trial and after the verdict, Weberman’s supporters decried Deutsch’s wife as a “slut” and made her and Deutsch the targets of vitriolic attacks.

Deutsch said many haredi Orthodox boys who are subjected to encounters like the one portrayed in the video only realize their inappropriateness years later, if at all.

“Some people are still in the box and they don’t want to say it’s sexual,” he said.

Nuchem Rosenberg, an outspoken Hasidic advocate against sexual abuse who operates a hotline for the Hasidic community, says he has fielded 20-30 phone calls in the last few days from women in Kiryas Joel worried about their children attending the yeshiva where the incident allegedly took place.

“When they saw this video, they are totally under shock,” said Rosenberg, who in 2012 was attacked with bleach by a Hasidic assailant angered by Rosenberg’s activism. “These women said, ‘Is this where we are sending our children to learn and get holy and learn the word of God?’”

Naftuli Moster, an advocate for state intervention in haredi schools to compel them to offer state-mandated, grade-appropriate English and math, also has been caught up in the firestorm over the video. He was interviewed by a local TV station about the video, and was involved beforehand in discussions about how to release it publicly.

Even for those who argue that this is not a case of sexual abuse, it’s impossible to say the school administrator’s behavior is in any way acceptable, Moster told JTA.

“There’s definitely a certain type of abuse taking place. He’s definitely doing something wrong. Maybe decades ago people used to do this in small yeshiva settings and thought it was OK,” Moster said. “But he’s pinning this kid between his legs. He’s holding him by the neck at one point. He seems to be kissing him. The kid is visibly scared.