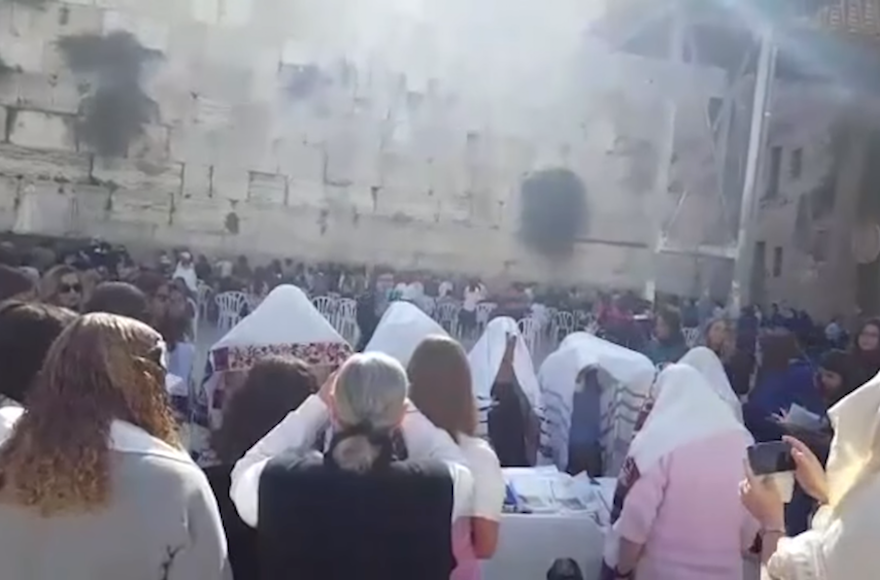 Women of the Wall holding a priestly blessing as part of its monthly service at the Western Wall, despite a ruling by Israel's attorney general forbidding the practice. (Screenshot from YouTube)
Advertisement

JERUSALEM (JTA) — Women of the Wall held a priestly blessing as part of its monthly service at the Western Wall, despite a ruling by Israel’s attorney general forbidding the practice.

The group also brought a Torah scroll to the Monday morning rosh chodesh prayer service, which also has been prohibited. Some 120 women participated in the service.

Both actions violate traditional customs of the site and thus are not allowed.

Attorney General Avichai Mendelblit last month said he would prohibit a women’s priestly blessing ceremony during the intermediate days of Passover. In announcing the ceremony, to be held at the Western Wall’s women’s section, Women of the Wall had declared it “the first of its kind.”

Tens of thousands of Jews flock to the Western Wall to receive the blessing from kohanim, or descendants of ancient Israel’s priestly caste, during the intermediate days of Passover.

After threatening to hold the ceremony on Passover despite the ruling, the women eschewed the blessing during their holiday service at the Western Wall.

On Monday during prayers for the new month of Iyar, the women brought a 250-year-old Torah scroll brought from Holy Blossom Temple in Toronto to be used for a Torah reading at the holy site. Police officers attempted to confiscate the scroll, but retreated when the women closed ranks, according to the Women of the Wall.

The group maintains that performing the priestly blessing during services for the new month is not a violation of local custom since the blessing is a part of the regular service in Israel.

The rabbi of the Western Wall, Shmuel Rabinovitch, decried the Women of the Wall’s “divisive actions” in a statement to the media. He criticized the women’s “brazen disregard for the customs of the place and the traditions of Israel and the feelings of the worshippers.”

“These women are insisting on deepening an actual rupture at the Western Wall, the only place that unites the people of Israel from all sectors and from all ethnic groups,” Rabinovitch said in the statement.

A 2013 Supreme Court ruling acknowledged the women’s right to pray at the Western Wall according to their beliefs, claiming it does not violate what has come to be known as “local custom.”