A day to join Israelis in an unbroken circle of grief 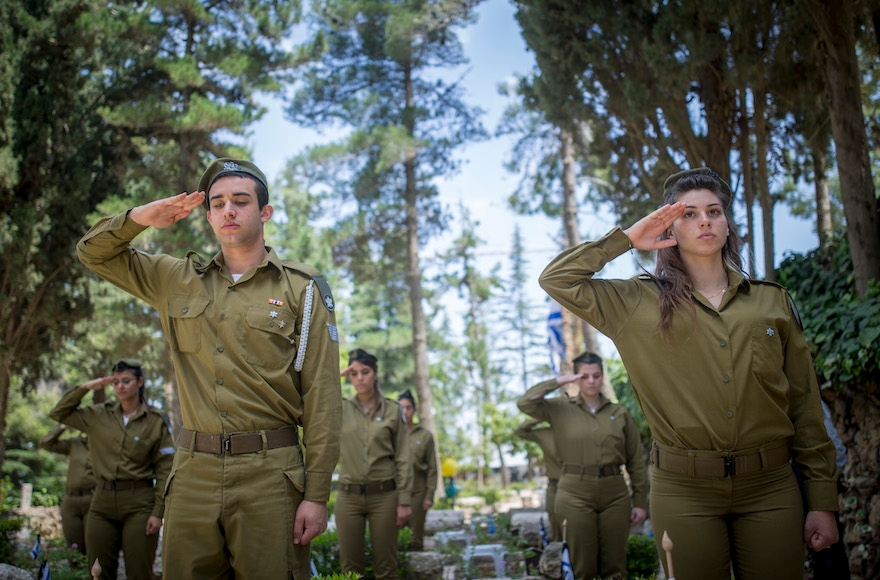 Israeli soldiers saluting during the flag-laying ceremony ahead of Memorial Day at the Mount Herzl military cemetery in Jerusalem, April 8, 2016. (Yonatan Sindel/Flash90)
Advertisement

NEW YORK (JTA) — This year I will mark two of Israel’s most important national holidays – Yom Haatzmaut (Independence Day) and Yom Hazikaron (Memorial Day) – far away from home. These are special days in Israel and for the Jewish people throughout the world, when people of all political and religious persuasions set their differences aside and unite in memory of the heroes whose sacrifices make the very existence of a safe, secure and prosperous Jewish state possible.

The process begins with solemn siren sounds throughout Israel. A sense of silent sorrow permeates the air and a celestial presence is felt that seems to be unique to our tiny nation. While the American version of Memorial Day commemorates the losses in some of history’s bloodiest wars, the atmosphere is different here than what is experienced in Israel. One does not find the same sense of sadness and unity that all Israelis feel on this holy day. Ours is an exceptional blend of personal and public mourning weaved in to one heart-wrenching day.

On Yom Hazikaron, Israelis and Jews throughout the world will retell the stories of bravery and martyrdom displayed by these heroes of Israel and those whose lives were cut short by the savage horror of terrorism. Through these tales that describe intense battles and highlight our mutual heritage, we try to breathe new life into our loved ones who are no longer with us. Still, we know deep down that no amount of touching memorials and heartwarming poems will bring back our heroes.

READ: See Israelis marking Memorial Day, from 1950 to the present 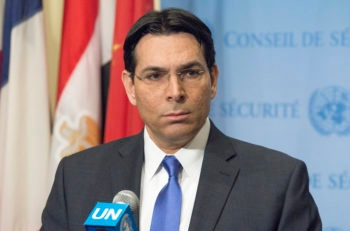 Ambassador Danon speaking to the press before the United Nations Security Council’s quarterly debate on the ongoing conflict between Israel and Palestine. (Albin Lohr-Jones/Pacific Press/LightRocket via Getty Images)

This year, I have a special task. I will do my best to convey the spirit of these special days to diplomats from around the world and our close friends here in America. Sadly, this bond has grown even closer over the past few years with a significant number of American Jews who have given their lives in Israel’s defense and fallen victim to the murderous terrorism that plagues our country. In doing so, I hope to build a bridge of shared values based on a common heritage and a future in which we are bound together with one another.

This is a new addition to what is my personal yearly challenge of passing on my family’s torch of memory to my children. My best attempts at describing the brave character of their grandfather, who fought valiantly in defense of a country that he loved so much, always seem incomplete and insufficient. The stories I tell and the photos I show have given my children some sense of who my father was, but I realize they will never have the opportunity to meet this exceptional personality whose love and guidance played such a huge part in who I am today.

On this special day we should take it upon ourselves not only to remember the heroes who were killed in defense of their country, but also the brave bereaved families who are left behind. The latest wave in Israel has added far too many new families to this sad circle of grief.

I am referring to the heroism of parents who despite being put in the cursed situation of burying their children vow to put every effort into going on with their lives. The heroism of siblings that find themselves trying to fill an interminable void. The heroism of the orphans, whose parents have gone in an instant from the most important person in their lives to just an honored memory. And of course, the heroism of the widows who somehow find the strength to turn in to lionesses that guard their young and leave no stone unturned in ensuring they grow up feeling loved and protected.

This is true heroism for which no citations are awarded.

On Yom Hazikaron, as we stand at attention and pay our respects to the brave men and women who fought valiantly in our nation’s wars, we must also honor the heroes who are still here living among us. After all, on this day everyone experiences for a short while the pain and loss felt by the bereaved families every hour of every day. On that day, for 24 short hours we are reminded what they go through and why it is so important that we stand resolutely at their sides.