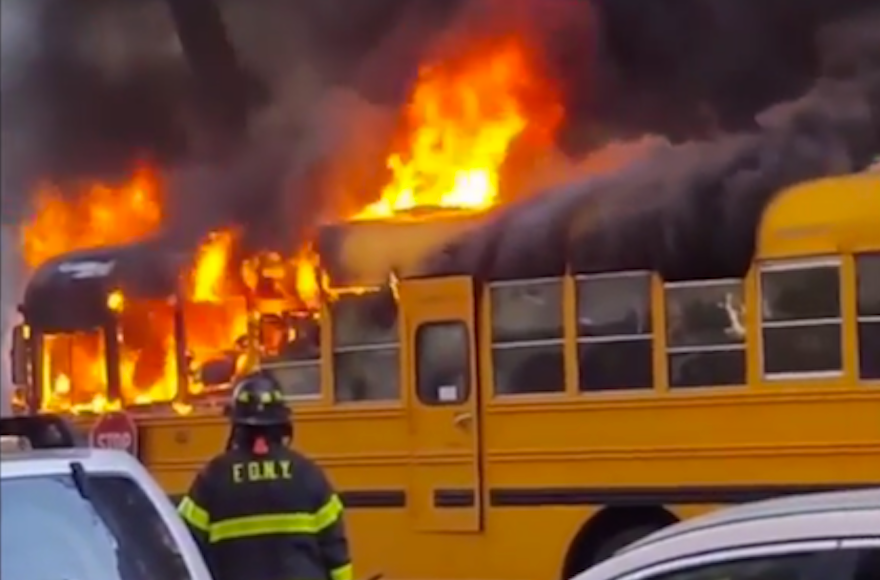 A school bus outside a Jewish school burning in the Crown Heights area of Brooklyn, New York, May 8, 2016. (Screenshot from YouTube)
Advertisement

Police released surveillance images of the boys on Tuesday, the New York Daily News reported. On Monday, the 11-year-old was charged with criminal mischief as a hate crime and arson as a hate crime. He was released to his parents.

The bus outside the Beth Rivkah School for Girls, a Chabad-Lubavitch institution in the Crown Heights section of Brooklyn, went up in flames on Sunday evening. No one was injured, but several prayer books and other items were destroyed.

According to the Daily News, the five boys caught on the surveillance video range in age from 10 to 15. They put cardboard boxes inside the unlocked bus and set them on fire.

Interviewed by WPIX-TV, bus owner Leonid Yavich said the vehicle was parked on the street an hour before the boys allegedly set it on fire.

“Reaction to what happened is very, very sad that young kids, in my neighborhood, which I’ve lived in for the past 30 years, which is a racially integrated neighborhood, that we have kids running around and the only feeling of accomplishment they have is from destruction,” Yavich said.

Police are asking the public’s help in identifying and locating the other four boys.

Anyone with information is asked to call NYPD Crime Stoppers at (800) 577-TIPS. All calls will be kept confidential.