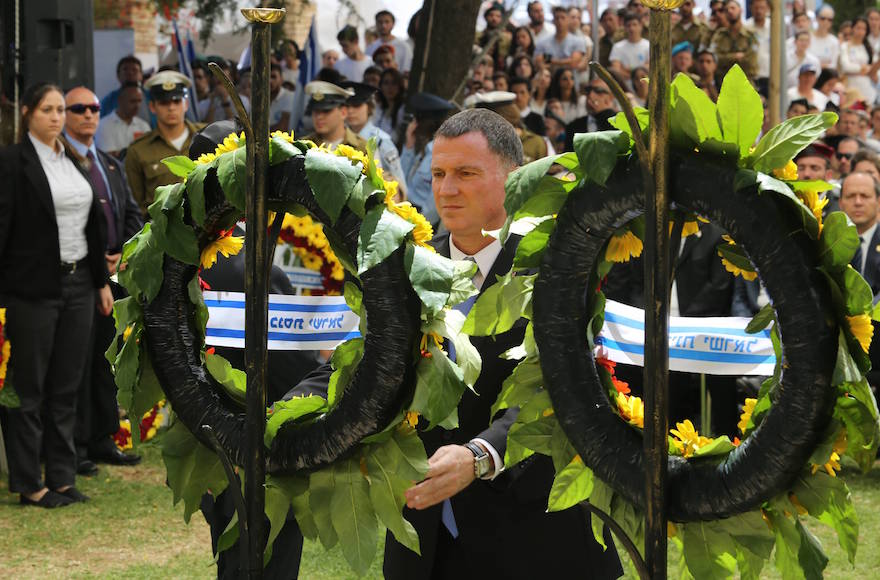 The country’s 68th birthday kicked off with an annual torch-lighting ceremony on Mount Herzl in Jerusalem Wednesday evening.

In the opening address at the ceremony, Knesset Speaker Yuli Edelstein spoke out about the country’s social divisions, The Times of Israel reported.

“The tensions that characterize us, and which are often healthy, have exceeded the boundaries of good taste,” he said. “Widespread freedom of expression, the lifeblood of democracy, is often characterized by offensive discourse. Utterances have become more and more extreme: sector by sector, belief against belief and worldview against worldview.”

Meanwhile, one of the four winners of this year’s Israel Prize, which will be officially awarded at a ceremony Thursday, said he will donate the $20,000 prize to a group working to end Israel’s occupation of the West Bank.

David Shulman, a Hebrew University linguistics professor being honored for his work on the language and culture of south India, announced in a video posted online Wednesday that he will give the money to Ta’ayush. Founded in 2000, the group is described on its website as a “grassroots movement of Arabs and Jews working to break down the walls of racism and segregation by constructing a true Arab-Jewish partnership.”

In his video, according to Haaretz, Shulman said he initially considered turning down the prize because of the “general deterioration of the situation and the witch hunt against Ta’ayush peace and human rights activists by a right-wing establishment determined to perpetuate the occupation.”

The committee that recommended Shulman for the award described his research as “outstanding in its diverse engagement with various literary genres and different areas of research” and said he “has made an important contribution to research and teaching in Israel’s universities.”

Among the 12 Israelis selected to light a torch at Wednesday night’s ceremony in Jerusalem were Rona Ramon, widow of Israeli astronaut Ilan Ramon, and four people selected for acts of heroism during terrorist attacks. One torch-lighter, Israeli Greek Orthodox priest Gabriel Naddaf, was accused earlier this week of sexually harassing young people, charges he has denied. Naddaf was selected for his efforts to encourage Christian Arab Israelis to enlist in the Israel Defense Forces.