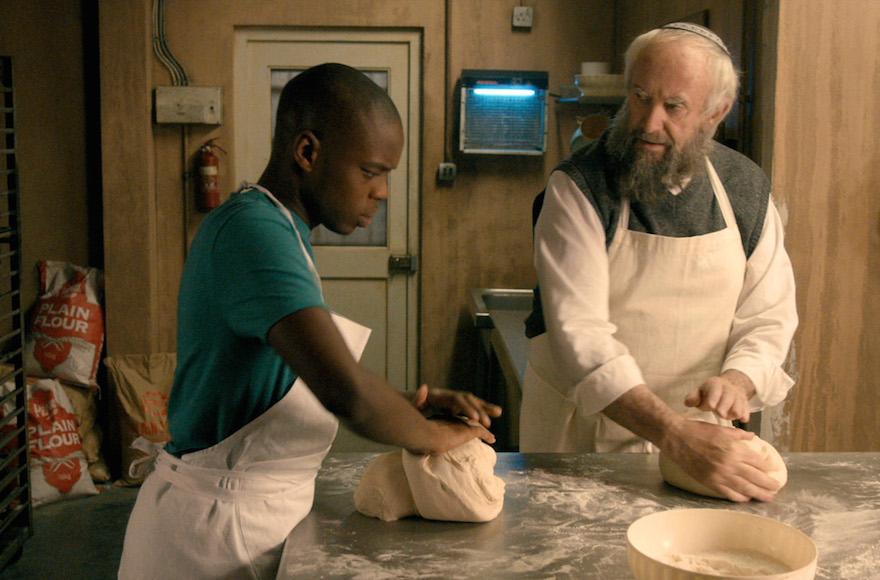 Jerome Holder, left, and Jonathan Pryce in a scene from "Dough." (Courtesy of Viva Films.)
Advertisement

LONDON (JTA) — Jerome Holder was a teenager with no acting experience when he successfully auditioned for the movie “Dough,” a British comedy about Jewish-Muslim relations.

Undaunted by Holder’s inexperience and impressed by his potential, director-producer John Goldschmidt gave him a lead role in the film, which was released in the United States in April. Holder portrays Ayyash, a devout Muslim Darfuri refugee who forges a close friendship with Nat, a Jewish baker for whom he works, despite their mutual biases.

There were, however, a few challenges along the way. For one thing, Holder comes from a churchgoing family of Jamaican descent, and he admittedly knew little about Judaism or Islam. For another, he describes himself as “horrible” at cooking and baking.

But Goldschmidt, 72, was untroubled by any of this.

“I’m not so concerned with actors’ biographies, really,” he told JTA last week at the London headquarters of BAFTA, the British Academy of Film and Television Arts. “I don’t need a to cast a Jew to play a Jew or a Muslim to portray a Muslim. They just need to be good actors. The rest is easy to teach and learn.”

Goldschmidt arranged for tutors, including an actual Muslim Darfuri refugee, to coach Holder in the ways of Islam, as well as a Jewish baker to teach him how to braid a challah. As for acting advice, that came from Holder’s co-star — the celebrated theater actor Jonathan Pryce, who is known to television viewers as the High Sparrow in “Game of Thrones.”

On set, Holder learned how to pray to Allah in Arabic. But the teen has discovered even more about Judaism, he told JTA.

“Since doing the film, I’ve almost become a surrogate Jew,” said Holder, a slender 21-year-old with soulful eyes. “I’ve been to so many Jewish events and seen so many Jewish people that I know much more about Judaism than even a year ago.”

Some of these events have been Jewish film festivals, where “Dough” is emerging as a major crowd-pleaser. The film is a feel-good urban fairy tale with round, credible characters who — despite the highly implausible plot involving challah laced with marijuana — successfully drive home a powerful message on how adversity can both build and knock down race barriers.

“Dough” has been screened in sold-out theaters in dozens of cities across the United States and earned a solid 70 percent score on the movie site Rotten Tomatoes, as well as praise by The Hollywood Reporter for its “snappy dialogue and the engaging turns.”

Recalling how the audience at a San Francisco Jewish film festival recently sang “Happy Birthday” to him after someone mentioned he had just turned 21, Holder said: “I found a very warm people where family is everything, and it’s something I can connect to and have a lot of respect for.”

At first, Ayyash distrusts his Jewish boss and suspects that he uses blood for baking. All the while, Ayyash abuses the baker’s trust by selling marijuana from his shop and secretly spiking the challah. The laced loaves dramatically increase sales for the small bakery, which serves a dwindling Orthodox Jewish community in London’s increasingly Muslim East End.

READ: New documentary asks if we’re ready to laugh at the Holocaust

As for the baker, a widower who is not over his wife’s death, he is alarmed to discover Ayyash is a Muslim, asking him to pray out of sight so as not to invite a counterterrorist raid. But over time the two men develop a father-son bond that is reinforced by external threats.

Written by Jonathan Benson and Yehuda Jez Freedman — the latter a London Jewish screenwriter who died last year at 36 from a genetic disorder — “Dough” differs from the race-comedy genre in how it neither sugarcoats the ugliness of racism nor caricatures its subjects.

The movie’s rough edges are no coincidence, according to Goldschmidt, a British Jew who grew up in the ruins of post-World War II Vienna and suffered anti-Semitic bullying at the Austrian boarding school he attended. Goldschmidt was born in Britain to an Austrian Jewish father who escaped the Nazis over the English Channel but returned to Austria after the war to work as a journalist. Goldschmidt lived in that country until he was 16, when he returned to Britain. 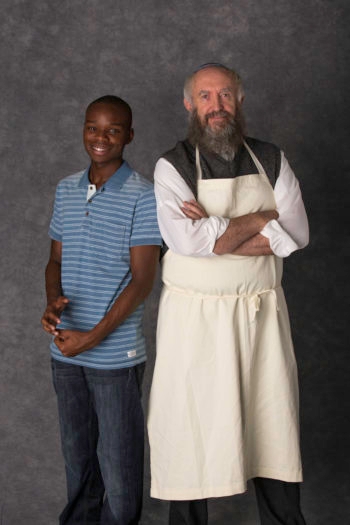 Jerome Holder, left, and Jonathan Pryce in London during filming of “Dough” in 2014. (Courtesy of Viva Films)

“Dough” is Goldschmidt’s second attempt at a film addressing Jewish-Muslim relations. His first try, a film set in a refugee camp, ended tragically in 2011 when Juliano Mer-Khamis, an Arab-Israeli actor who was working with Goldschmidt on the project, was murdered in Jenin.

In an incident unrelated to Goldschmidt’s film, Mer-Khamis was gunned down, allegedly by Muslim extremists, for putting on a stage adaptation of “Animal Farm,” which featured a character in a pig costume. Mer-Khemis also encouraged women to attend.

“I decided to forget that, I’m not doing this,” Goldschmidt said. “I’ll try to deal with the subject through comedy, but in a serious way.”

While “Dough” is not above slapstick, it tackles painful themes, including Islamophobia, the religious jihadi aspects of the Darfur genocide and how petty crimes against Jews sometimes spill over to hate crimes. The film features many racist pejoratives.

This gravity sets “Dough” apart from films like “The Infidel” — a wacky 2010 British comedy about an East End Muslim who discovers he’s adopted and Jewish — or “Jalla Jalla,” a Swedish production in which Arab swindlers are portrayed as smarter than their dimwitted Nordic neighbors. (Some critics of that film said it celebrates stereotypes instead of deconstructing them.)

“Dough” doesn’t let ordinary Brits off the hook, either. Though Nat’s family has been in Britain for centuries and has owned its bakery for more than 100 years, the Jewish baker finds himself being congratulated by a competitor on “achieving the immigrant dream.”

If Goldschmidt’s own experience of living as an outsider — first as a Jew in Austria and later as an Austrian in the UK — adds to Dough’s heft, then “it didn’t happen consciously,” he said. Rather, “Dough” came out as various relevant trends emerged, he said, including mass Muslim immigration into Europe, rising anti-Semitic violence by Muslim radicals, and xenophobia in Europe and the United States.

Unlike the movie’s happy ending, Goldschmidt ends the interview on a somber note, citing the deepening of social divisions and the resurgence of blatant anti-Semitism in Europe that he thought he’d never see in his lifetime.

“’Dough’ is a fairy tale,” he said. “We live in very volatile, dark times — and that’s all the more reason to make a film that discusses this, but allows to people to leave the cinema smiling.”