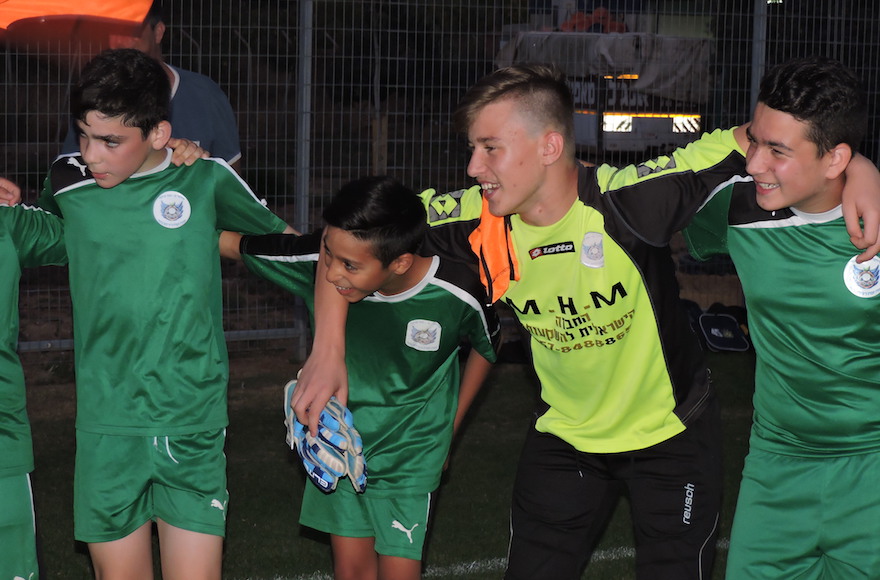 PARDES HANNA, Israel (JTA) — When Yoel decided, at age 8, to begin observing Shabbat, there was one problem: It meant he couldn’t join most of Israel’s youth soccer teams, which played games on Saturday.

Yoel, now 12, has always lived in the increasingly large gray area between Israel’s starkly divided religious and secular Jewish societies. His father observes Shabbat, his mother doesn’t. He attended a religious elementary school, but transferred to a secular school this year.

He enjoys how Shabbat forces him away from TV and video games, allowing him to relax.  But as a budding soccer forward, Yoel also likes the feeling of grass under his cleats. Few things excite him more than going one-on-one against a goalie and kicking a “missile” into the goal.

Yoel no longer has to decide between Shabbat and soccer, thanks to a team run by Tzav Pius, a not-for-profit organization that aims to bridge the divides between religious and secular Israeli Jews. Tzav Pius teams play games during the week, from Sunday to Friday, allowing religious Israelis to participate.

“Tzav Pius lets me play soccer,” said Yoel, who as a minor couldn’t give his last name without a parent’s permission. Saying he has religious and secular friends, he adds: “I know how it feels to be in two different societies.”

Tzav Pius, which has organized 96 youth soccer teams across Israel, is aiming to change how the country’s religious society and soccer establishment view each other. Because Israel’s most popular sport is played on its day of rest, about one-third of Israeli Jews — the proportion that observes Shabbat — cannot watch, attend or play games.

What has resulted is a largely secular soccer culture. Soccer fandom, which unites nations and cities worldwide around their favorite teams, has become another wedge within Israeli culture, creating two groups that have two different passions on the same day.

“There’s a secular culture of sports that has no connection to Shabbat, and religious Jews want to be part of it,” said Avner Michaeli, a Tzav Pius youth counselor who is secular. “As a kid, my whole world was that Saturday was soccer. So as a religious Jew, you could say, ‘Don’t go crazy, it’s just soccer.’ Just like a secular Jew can tell a religious Jew, ‘It’s 2016, why can’t you drive [on Shabbat]?’”

Each of Israel’s 1,200 youth soccer teams, for children ages 10 to 18, is linked to one of the country’s 234 professional teams. Kids try out for the youth league, and the best athletes are groomed to play pro. Israel’s abbreviated weekend begins Friday afternoon and ends Saturday night; teams play on Saturday afternoon because weekend games are easier on families.

Until Tzav Pius began fielding youth teams 12 years ago, aspiring religious soccer players would either break Shabbat to play or give up on the sport. Moshe Yazdi, who now coaches the Tzav Pius team in Pardes Hanna, a city between Haifa and Tel Aviv, grew up religious but loved soccer. Beginning at 16, he was accepted to the local youth team and would sneak out Saturday afternoons, without telling his parents, to play games and ride the team bus, if necessary.

Tzav Pius teams now play on weekday afternoons, and the league requires rival teams to schedule their matches accordingly. Still, difficulties can arise. One Tzav Pius team forgot to request a rescheduling, so the players had to walk the five miles from one city to another rather than violate Shabbat by driving. Last year, a team had to stay overnight in a synagogue to play a Saturday game.

“It doesn’t bother them to play in the middle of the week,” said Iddo Diamant, director of Tzav Pius’ soccer program. “The kids come to play soccer. That’s what’s great about it. They don’t care about who’s religious and secular.” 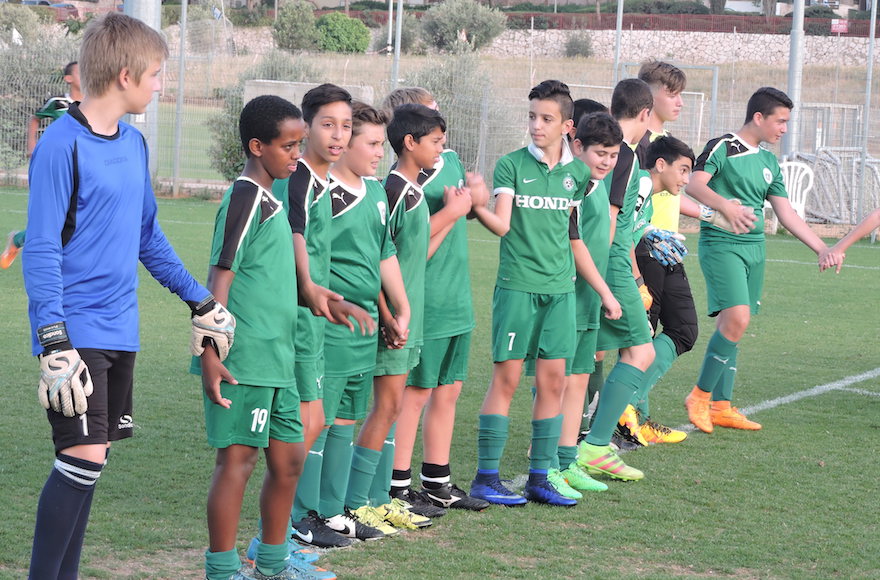 Members of the Tzav Pius 13-year-olds’ team in the Israeli city of Pardes Hanna participating before a practice in an educational exercise meant to teach teamwork.
(Ben Sales)

Founded after the 1995 assassination of Prime Minister Yitzhak Rabin stoked bitter religious-secular tensions in Israel, Tzav Pius runs a network of joint religious-secular schools, kindergartens and summer camps that promote what it calls an “integrated” society.

Tzav Pius — literally “reconciliation order,” a play on the Hebrew phrase for a draft notice — doesn’t shy away from advancing its coexistence message during practices. A couple times each month, before the kids run drills and scrimmage, they attend an hourlong educational session on the field featuring games and exercises designed to imbue tolerance and an appreciation for pluralism. Some activities also aim to counter racism among Israeli soccer fans and players.

In one exercise on Monday, this city’s 13-year-olds’ team divided into two groups. One was allowed to play by normal rules, with the advantage of two goalies. The other had the usual one goalie, plus its players could only touch the ball twice before passing it. The exercise aimed to teach the kids how to handle an uneven power dynamic between two groups.

Michaeli, who runs the exercises, has experience playing with groups from different backgrounds. The child of a kibbutz, he grew up playing in a league with city kids, Arabs and Jews. While Michaeli said the kids enjoy the educational activities, they don’t always succeed. He recalled one exercise about breaking Shabbat to play the game — the core dilemma Tzav Pius is addressing. The ensuing argument ended up splitting the team along religious and secular lines.

“It’s all nice in theory, but in practice it isn’t always,” Michaeli said. “Everyone goes to their own corner and isn’t ready to give up on his space. Secular will remain secular, but I think the kids on the team will be a little more open.”

Although Tzav Pius allows Yoel, the 12-year-old forward, to play, he still feels a conflict between religion and soccer. Were he not Shabbat observant, he said, he could join the best youth teams and try to work his way up.

But Yoel knows one thing for certain: While he appreciates coexistence, he’d rather skip the educational exercises and play the game.

“I would rather have fewer activities,” he said. “Kids don’t enjoy that. We have education at school.”