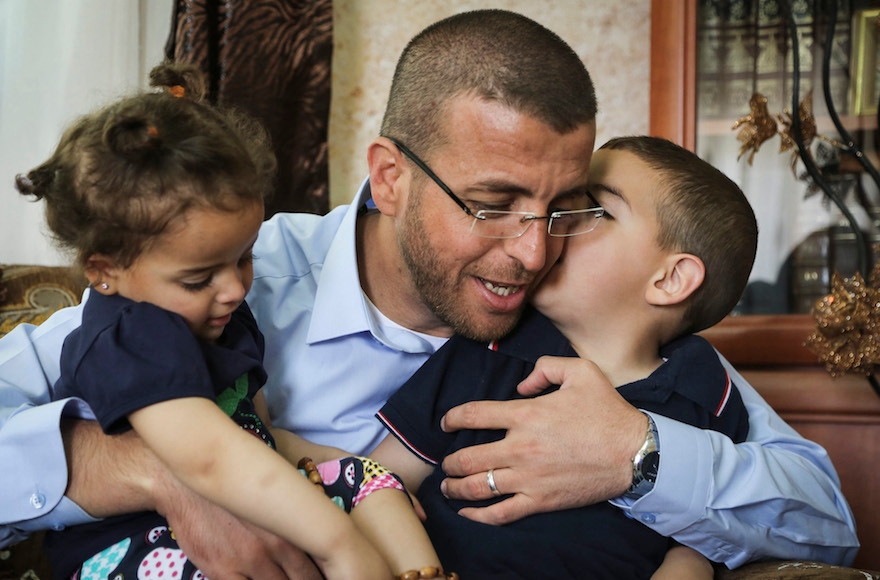 Freed Palestinian journalist Mohammad al-Qiq embracing his family upon his release in the West Bank town of Dura, south of Hebron, May 19, 2016. (Flash90)
Advertisement

(JTA) — Israel released from prison a Palestinian man who had endured a 93-day hunger strike during his five months in prison.

Al-Qiq ended his hunger strike in February as part of an understanding reached with Israeli officials that he would be released in May.

Ibrahim Najajra, director of the Ministry of Prisoners and Ex-Prisoners Affairs in the Hebron area, told Ma’an news agency that Al-Qiq’s family, including his two children, waited for him at the Meitar crossing.

Prior to his arrest, al-Qiq worked as a reporter at the Saudi News Agency Almajd TV Network. The Associated Press reported that Israel’s Shin Bet security service said al-Qiq is involved in terrorist activities linked to the Hamas movement. He has denied the claim.

Israel’s Supreme Court in February said al-Qiq was “clearly a Hamas activist involved in militant terrorism” but suspended his detention order, citing humanitarian reasons tied to his deteriorating health because of his hunger strike.

Administrative detention allows suspects to be held without charge for six-month intervals and can be renewed by a judge indefinitely.

The court has sanctioned administrative detention under certain limitations, ruling it conforms to international law and the Fourth Geneva Convention.

Israel says the measure is necessary for security, but civil liberty groups say the practice is a violation of human rights.

There are a few hundred Palestinians and several Israelis held in administrative detention, according to the Israel Prison Service.