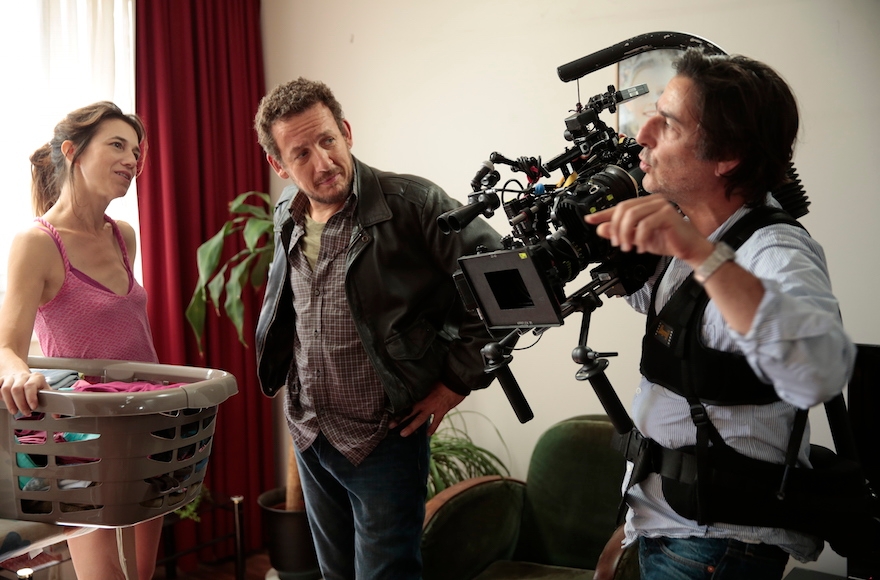 Director Yvan Attal, right, with Charlotte Gainsbourg and Dany Boon during the filming of "The Jews" in Paris. (Courtesy of Wild Bunch Productions)
Advertisement

PARIS (JTA) — When the French-Jewish film director Yvan Attal titled his much-hyped comedy about anti-Semitism “They Are Everywhere,” he did so in reference to how some anti-Semites feel about Jews and vice versa.

But the French-language title applies in another way, too: Though the film has yet to be released, Attal and the star-studded cast have been all over the French media, which are abuzz over the irreverent take on a problem that’s seen — by some, at least — as a scourge of French society.

“The Jews” — the English title for the film — stars Attal, an Israel-born actor-director who grew up in Paris, and his life partner, actor-singer Charlotte Gainsbourg. The mere fact of the film’s existence has been the subject of dozens of news articles by major publications in recent weeks, including Le Figaro, Paris Match and the Agence France-Presse.

The cast – including famed comedians in France like Dany Boon, who is Jewish, and Benoît Poelvoorde — have appeared on several prime-time talk shows.

Given the high profile of the movie, I could hardly believe my luck when CRIF, the umbrella group of French Jewish communities, invited me to a pre-premiere of the film — it had not been screened before any audience — followed by a Q&A with Attal.

In the movie, Attal attempts to deconstruct or spoof major anti-Semitic myths,  such as “Jews killed Jesus,” “Jews have money” and “Jews play up the Holocaust.” Each stereotype provides a theme for a short cinematic tale. The seemingly disparate stories are connected by a narration by Attal, who portrays himself in therapy discussing his obsession with Jews and anti-Semites.

The security outside the rented cinema for the May 17 screening was tight. Our bags were inspected at the entrance; some people were patted down and questioned. A casually dressed Jewish man in his 50s – the main age group represented — swore to the guard he wasn’t smuggling in any homemade popcorn before opening his bag with a smile.

Such security has become commonplace at Jewish events; it’s now a standard precaution following the slaying of 12 people since 2012 in jihadist attacks on Jewish targets in France and Belgium. Hundreds of nonfatal violent hate crimes against Jews have been recorded in Paris since that year, when an Islamist killed three children and a rabbi at a school in Toulouse.

It was the school tragedy that indirectly inspired the movie, Attal said at the post-screening Q&A.

“I was in a taxi not long after Toulouse listening to the news about the arrest of some Islamist ring when the taxi driver said, ‘one of these days they will attack a school.’” When Attal reminded the driver that they already have, “he shrugged and said, ‘yeah, you’re right.'”

The exchange inspired Attal to make a film for non-Jews that he said would draw attention to the “anti-Semitic myths that serve to legitimize attacks on Jews on one hand and desensitize some observers to the true horror of these attacks on the other hand.”

The first story in the movie is about a nationalist politician whose ambitious husband discovers he’s Jewish. He uses the secret to blackmail his wife into feigning cancer and thereby replaces her at the party’s helm. Styled after France’s far-right politician Marine Le Pen, her character stares at her own reflection with a defeated air while wearing a haircut and pajamas evocative of an Auschwitz prisoner.

Another controversial scene involves a womanizing Mossad agent who is sent back in time to kill baby Jesus. Instead he ends up falling for the biblical Mary, who is depicted as the town floozy and a cheat. Attal said he removed from the final edit a sex scene between the agent and Mary to avoid offense to Christians.

The scenes and dialogues are snappy, containing some slapstick along with provocative statements about the Holocaust, French politics and Christianity. 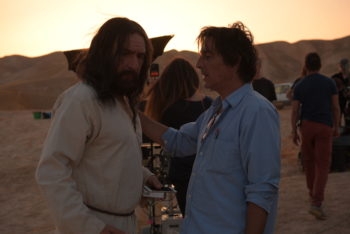 Yvan Attal, right, and Gilles Lellouche during filming of “The Jews” in Israel in 2014. (Courtesy of Wild Bunch Productions)

At the CRIF screening, the audience seemed to enjoy the film, particularly Attal’s narration sequences. In the deeply personal monologues — “It would be dishonest to hide behind some character,  he’s pretty much me,” he told the crowd — Attal, 51, speaks about being a Jewish filmmaker who is obsessed with Jews and anti-Semitism, and who is married to a woman whose father is Jewish (the legendary Serge Gainsbourg).

The crowd roared at Attal’s Jewish jokes: “I get why people hate us rude Sephardic Jews, but the poor Ashkenazis? They’re practically goyim!” They nodded pensively at some of Attal’s more serious musings, including about his connection to his Algeria-born Orthodox parents, despite his linguistic, religious and cultural disconnect from their reality.

Several viewers commended Attal’s ”courage” to make the film, despite the reluctance of producers to fund it. There was pressure as well from some distributors to broaden its scope to include other types of racism — an understandable instinct in a country with a strong universalist ethos.

“It’s a problem seen as too sensitive, people don’t want to talk about it,” he said of anti-Semitism. It’s a sentiment held by many Jews who are critical of the perceived indifference of French society to the killings in Toulouse, compared to the national mobilization that followed the murder of Charlie Hebdo staffers in 2015.

The real courageous act, though, was showing the film to a bunch of Jews, Attal said. He also urged the crowd to keep in mind that they are ultimately not the intended audience.

“I know you: Two Jews, three opinions, and I just know you’ll slam me for this or that right after you see it,” said Attal, who wore a T-shirt and chewed gum as he spoke. “Honestly, this right here is my worst fear.”

His concerns were just partly justified. While largely positive, some viewers said they feared his comedy was too highbrow and that its nuances would be lost on viewers “in the suburbs” (read: Muslims) who would take the film as affirming the very stereotypes it cleverly seeks to destroy. Another remarked those same viewers are more likely to watch American action films as an escape from the grinding reality of life as second-class citizens in France’s violent ghettos.

Attal conceded he believes the film will probably not reform hardened anti-Semites but might “raise question marks among the undecided.”

Another critic remarked that while the film addresses anti-Semitism by the far right, he “avoided the most difficult problem right now: Muslim anti-Semitism.”

But the absence of Muslims from the film was a deliberate omission, Attal said. The inclusion, he said, “would’ve meant being labeled Islamophobic, backfiring and exposing us to attack.”

“We didn’t want to fall into clichés while trying to debunk them. You have to walk a fine line between provoking thought in your audience and alienating them.”

And yet, Attal said he tried to show in the film that attacks on Israel — and, by extension, its people and supporters — are at least partly motivated by hatred of Jews. He drives the point home at the end of the film.

In the concluding story, France votes to become a Jewish state following a referendum led by an unpopular president who is desperate to revive the economy. (He figures France will get rich by doing so because all Jews are rich.)

But all does not go as planned. The film’s shocking, final shot is a bird’s-eye view of Paris. An oscillating siren blasts from the speakers and, in slow-motion, a large surface-to-surface missile descends near the Eiffel Tower.