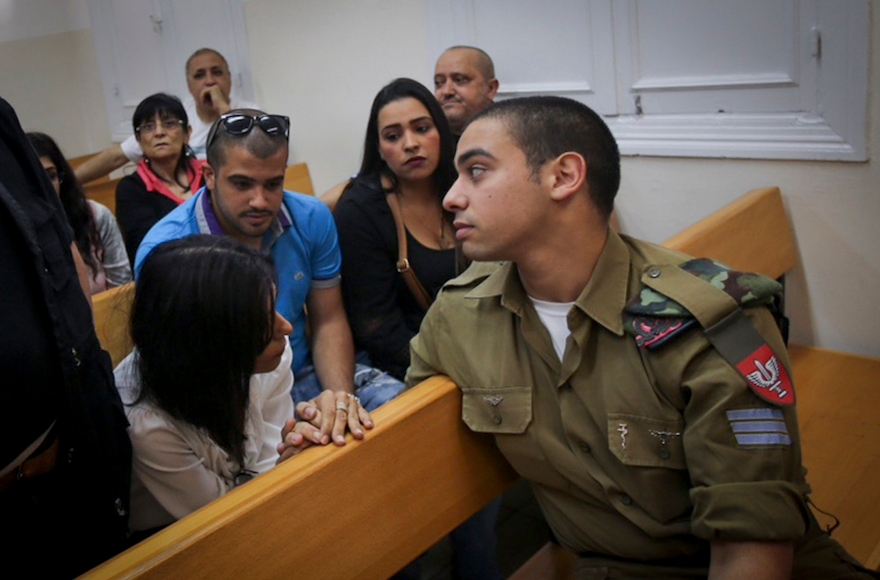 (JTA) — An Israeli soldier pleaded not guilty to manslaughter for shooting an incapacitated Palestinian attacker in the West Bank in March in a case that has roiled the country.

Attorneys for Sgt. Elor Azaria, 19, of Ramle, told the Jaffa Military Court on Monday that their client acted in self-defense, fearing an immediate threat to himself and other soldiers at the scene.

“The accused acted in a split second to neutralize the terrorist and prevent injury to himself and his companions who were near the terrorist,” the attorneys said, according to The Times of Israel. “He didn’t see another possible way to save his and their lives.”

The defense acknowledged that Azaria may have caused the death of Abdel Fattah al-Sharif, but indicated they might revisit the pathology reports that showed it was the soldier’s shot to the head that killed the assailant.

The Jaffa court in April indicted Azaria for manslaughter and inappropriate military conduct for shooting and killing Sharif on March 24. Sharif was shot as he and another assailant launched a stabbing attack on Israeli soldiers in Hebron, wounding one.

The other assailant was killed, and Sharif was injured. Minutes later, while Sharif was lying on the ground, Azaria shot him in the head. The shooting was captured on video.

“The defendant imagined a situation in which, in light of the circumstances, the terrorist was carrying on himself an explosive belt and knife as part of an integrated attack and his movements were intended to activate the belt on his body,” Azaria’s attorneys told the court, saying he had been warned of such a possibility in military briefings.

The military prosecutor told the court in March that Azaria had said Sharif “needed to die” moments after shooting him, an account backed by two soldiers who were at the scene.

Azaria’s case has been controversial in Israel — with some on the political right calling for solidarity with the soldier and others, including military leaders, suggesting such calls reflect a national crisis of ethics. Prime Minister Benjamin Netanyahu and then-Defense Minister Moshe Yaalon immediately condemned the shooting. They then came under fire, including from right-wing politicians, for not standing behind Azaria. Netanyahu later called the soldier’s father in what many saw as a sign of support.

Avigdor Liberman, who is in negotiations to replace Yaalon as defense minister and previously backed Azaria, said he would not use his authority to intervene in the trial.

Liberman would bring with him into government his nationalist Yisrael Beiteinu party, expanding the coalition’s narrow majority in the Knesset. Netanyahu’s offer of the Defense Ministry to Liberman led Labour Party head Isaac Herzog to last week break off negotiations to form a national unity government, reportedly scuttling international plans to push an Israeli-Palestinian peace initiative.