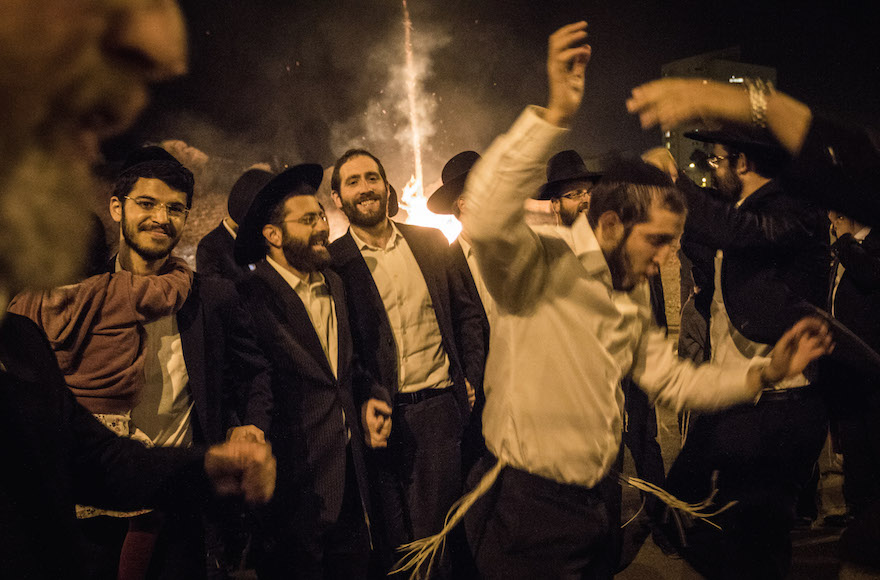 (JTA) — Bonfires lit up Israel during the Jewish holiday of Lag B’Omer, resulting in hundreds of injuries and possibly igniting a blaze in Jerusalem that forced the evacuation of dozens of residents.

Tens of thousands of revelers flocked to the north of Israel Wednesday to dance around towers of flames. Magen David Adom, an Israeli emergency service, reported over 150 injuries, 17 of which required hospitalization. An Orthodox Jewish emergency response organization, Hatzalah, said it had treated 577 people for mostly light injuries at two clinics set up outside the grave of Rabbi Shimon Bar Yochai on Mount Meron, a popular pilgrimage site for the holiday.

The Times of Israel reported that hundreds of emergency teams were on standby  with ambulances, emergency motorbikes and Segways for the all-night celebrations, anticipating burns, alcohol poisoning and dehydration, which have become as much rituals of the holiday as the first haircuts of three-year-old boys.

Police rescued five kittens from being tossed into the flames as well, according to The Times of Israel.

Also on Wednesday, forest fires broke out at two locations near Jerusalem in the Ramot Forest and Cedar Valley and were thought to have been sparked by Lag B’Omer celebratory fires, reported The Jerusalem Post. Eighteen fire-fighting and rescue teams and four water-dropping air teams were dispatched to battle the blazes.

Residents in several neighborhoods near the fires were asked to evacuate their homes as the flames spread but by Thursday evening firefighters had the blazes under control.

Residents were given permission to return to their homes, with instructions to keep windows closed due to poor air quality.

Bar Yochai was a 2nd century disciple of the sage Rabbi Akiva and was revered for his teachings on Kabbalah, or Jewish mysticism. Lag B’Omer commemorates Bar Yochai’s death and the revelation of the Zohar, a spiritual text. The bonfires are meant to symbolize the light of those teachings.