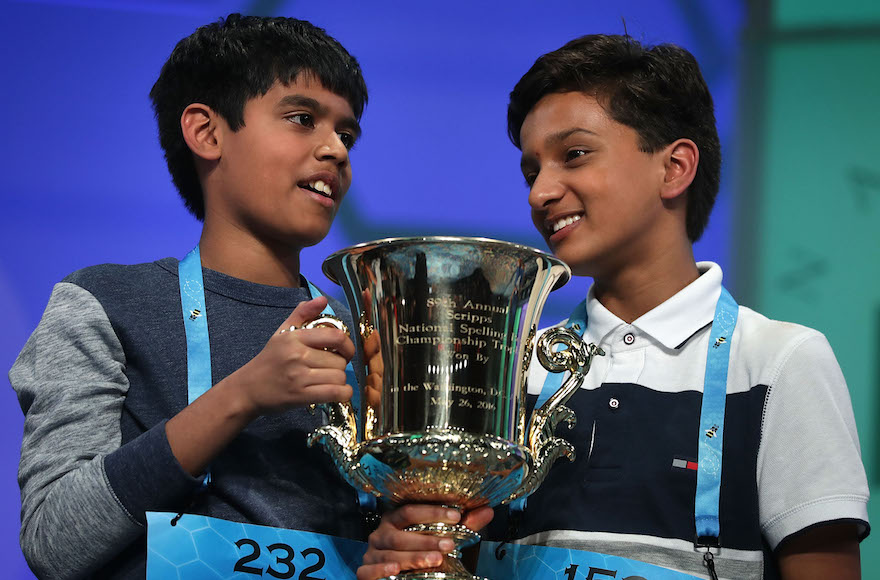 The final of the nation’s most prestigious spelling bee took a Yiddish turn Thursday night.

Scripps National Spelling Bee finalist Jairam Hathwar, a 13-year-old from Corning, New York, was asked to spell the word “chremslach” in the ultimate rounds of the competition.

Not up on your Yiddish and wondering what the word means? You probably aren’t alone. Chremslach are small, flat fried matzah meal cakes traditionally eaten by Jews during the Passover holiday.

Mazel tov to Jairam, who spelled the word correctly and went on to be crowned spelling bee co-champion, along with Nihar Janga, an 11-year-old boy from Austin, Texas. (After 39 rounds, the contest ended in a tie for the third consecutive year.)

Jairam and Nihar were among ten spellers in the finals, broadcast live on ESPN. Both boys said they knew some of the words they were given and figured out the spelling of the rest. They will each take home $40,000 in cash and other prizes.

Jairam’s brother Sriram was co-champion in 2014.

Thursday wasn’t the first time a Jewish word popped up in the Scripps National Spelling Bee.

In 2013, 13-year-old Queens, New York native Arvind Mahankali won the bee by spelling “knaidel,” the Yiddish word for a matzah ball or dumpling usually placed in matzah ball soup. The word’s spelling set off a Yiddish debate — the YIVO Institute for Jewish Research, a New York-based organization seen as the authority on Yiddish history, claimed the correct spelling was “kneydl.”

In the same contest, 13-year-old Hannah Citsay correctly spelled the word “hesped” — a Hebrew-derived term for an oration or eulogy given after a Jewish memorial service.

In 2009, “kichel” — a Jewish dessert cookie — made a very Jewy appearance. The sentence used to put the word in context for a contestant was: “The thought of someone kvetching about her kichel gave Meryl the spilkes.”

In 2006, 14-year-old Saryn Hooks was eliminated after judges thought she had spelled “hechsher” incorrectly. But in a dramatic twist, the brother of a fellow contestant noticed she had in fact correctly spelled the word — which means a rabbinical endorsement of food prepared according to kosher laws — and notified the judges. She was invited back to the contest. She didn’t end up winning.