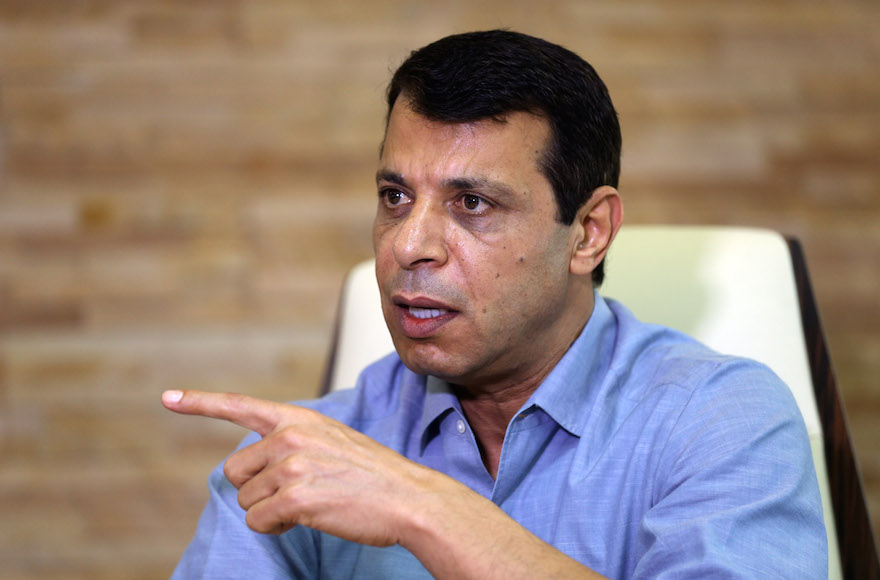 Mohammed Dahlan gesturing during an interview at his office in Abu Dhabi, Sept. 16, 2015. (STR/AFP/Getty Images)
Advertisement

Citing unnamed senior Palestinian and Jordanian sources, Middle East Eye reported Friday on the joint plan to bring Dahlan, the former leader of Abbas’ Fatah party in the Gaza Strip, back from exile in the Gulf.

The plan was discussed with Israel, according to the article, which did not indicate Israel’s reaction.

Dahlan, a bitter rival of Abbas, was driven from Gaza after Hamas seized control of the coastal enclave in 2007. In 2011, he was expelled from Fatah amid allegations of corruption and accusations that he had poisoned longtime Palestinian Authority leader Yasser Arafat.

The Middle East Eye said the plans key goals are to unite Fatah and strengthen it against Hamas, weaken Hamas, complete a peace agreement with Israel and seize control of sovereign Palestinian institutions in the West Bank.

“The parties [the UAE, Jordan and Egypt] believe that Mahmoud Abbas has expired politically and that they should endeavor to stop any surprises by Abbas during the period when Fatah will remain under his leadership until the elections are held,” the source said.

According to the report, Jordan has concerns about Dahlan, however, namely his reputation for being unpopular among Palestinians and allegations that he is corrupt and has ties to the Israeli security services.