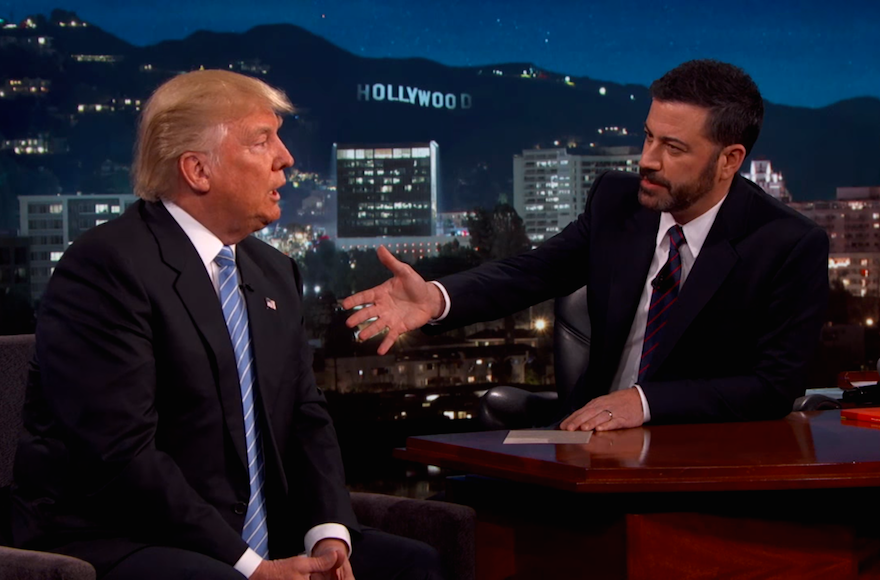 (JTA) — Donald Trump said he would not debate Bernie Sanders because it would be “inappropriate” in light of Sanders trailing Hillary Clinton in the Democratic primary fight.

Trump, the presumptive Republican nominee for president, addressed the possibility of debating the Vermont senator on Friday in a statement, CNN reported.

“Based on the fact that the Democratic nominating process is totally rigged and crooked Hillary Clinton and [Debbie] Wasserman Schultz will not allow Bernie Sanders to win, and now that I am the presumptive Republican nominee, it seems inappropriate that I would debate the second-place finisher,” Trump said in a statement, referring also to the head of the Democratic National Committee.

Trump also said news networks “are not proving to be too generous to charitable causes,” which he previously had said would be a goal of debating Sanders.

The two populist candidates had floated the idea of debating each other throughout the week. Sanders has been trying to debate Clinton ahead of the California primary on June 7, but she has declined.

Speaking to reporters in Los Angeles, Sanders said he was disappointed that Trump changed his mind.

“I hope that he changes his mind again. Mr. Trump is known to change his mind many times in a day,” Sanders said. “Trump is a bully, he’s a big tough guy. Well, I say to Mr. Trump, what are you afraid of?”

“He’s a dream,” the real estate magnate said. “If we can raise [money] for maybe women’s health issues or something. If we can raise $10 or $15 million for charity, which would be a very appropriate amount.”

“I understand the television business very well. I think it would get high ratings,” Trump added.

The idea of the two debating surfaced Wednesday night when ABC’s Jimmy Kimmel told Trump he had a question from the Sanders campaign asking if Trump would be willing to debate the Democratic hopeful.