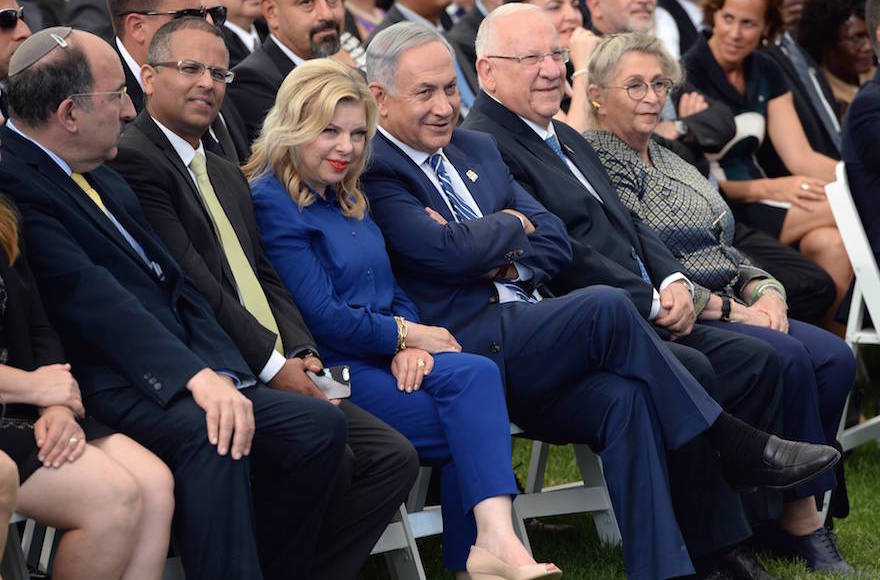 Prime Minister Benjamin Netanyahu and his wife, Sara Netanyahu, attending a celebration for foreign diplomats at the President's Residence in honor of Israel's 68th Independence Day in Jerusalem, May 12, 2016. (Haim Zach/GPO)
Advertisement

(JTA) — A former employee of the Israeli Prime Minister’s Residence was awarded some $31,000 by a Jerusalem labor court, accepting his claim to have been mistreated by the prime minister’s wife.

It was the second time this year the Jerusalem District Labor Court had ruled against Sara Netanyahu in an employment abuse case.

On Tuesday, the court found in favor of Guy Eliyahu, who had sued the Prime Minister’s Office for wrongful dismissal and abusive treatment, the Times of Israel reported. In testimony last fall, Eliyahu said Netanyahu called him to the residence in the middle of the night to heat a bowl of soup and, on another occasion, to wish her good night.

Judge Dita Proginin called the latter demand “an unreasonable and humiliating request that didn’t take into consideration the rights of the worker to be treated with respect and the right to work reasonable hours.”

In March, Proginin ruled in favor of another former employee of the Prime Minister’s Residence, Menny Naftali, who also claimed abuse by Netanyahu. Naftali was awarded some $43,735 in damages.

In the Eliyahu case, Proginin said Netanyahu created an “atmosphere of fear” at the residence and subjected Eliyahu to “damaging employment” that included “reprimands, shouting, humiliations, and excessive and unreasonable demands” as well as a work schedule “that doesn’t align with the law.”

Netanyahu’s lawyer, Yossi Cohen, in turn accused Proginin of “the real abusive treatment,” claiming the judge “blatantly ignored the testimony of Mrs. Netanyahu.” Following the Naftali ruling in March, Netanyahu tried unsuccessfully to have Proginin dismissed from the Eliyahu case.

The court’s ruling was the second blow in a bad week for the prime minister’s wife. On Sunday, Israeli police concluded a probe into fraud and misuse of public funds that may lead to an indictment of Netanyahu on criminal charges.

A police spokesperson said there had been established “an infrastructure of evidence” that police say may support prosecution and possibly a conviction.

The probe was initiated last year amid claims that Sara Netanyahu expensed services provided to her family for their private use, falsely claiming it was for the residence, which is not owned by the Netanyahus and whose maintenance is paid for by the state.

She has denied any wrongdoing throughout the investigation, in which Prime Minister Benjamin Netanyahu is not a suspect.