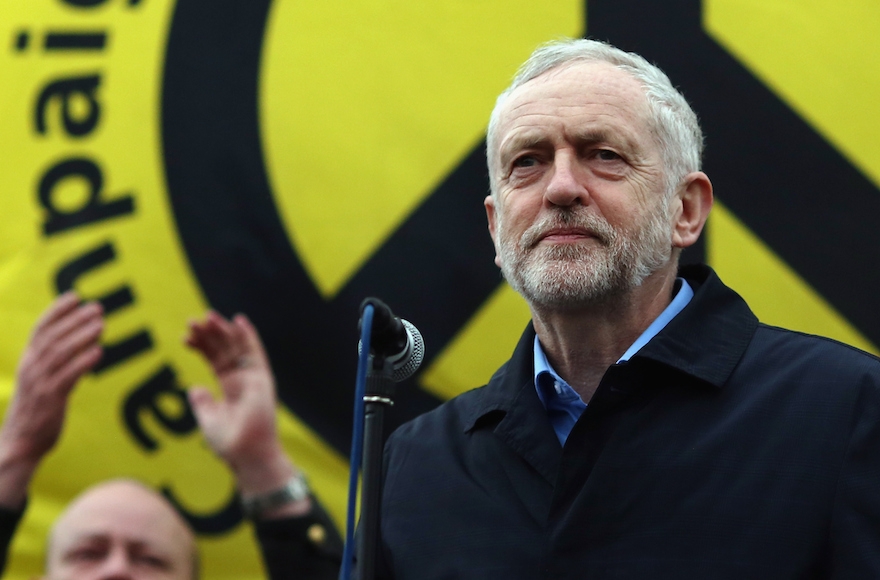 (JTA) — In letters sent to the foreign minister, the head of Britain’s Labour Party, Jeremy Corbyn, called for sanctions against Israel and described some of the Jewish state’s politicians as “criminals” who should be banned from Britain.

Corbyn’s anti-Israel letters, written while he was a Parliament member but before he was elected party chief, were obtained by the UK’s Jewish News through a Freedom of Information request. In an article published Wednesday, the Jewish News reported that Corbyn also said Israel treats Palestinians “with disdain” and that its “victimization of the people of East Jerusalem is an abomination.”

Corbyn already is under fire from British Jewish leaders who have voiced concerns that he is not doing enough to address anti-Semitism among party members.

News of the letters came on the same day a documentary on Corbyn aired showing him criticizing a Jewish journalist who wrote that the Labour Party has an anti-Semitism problem.

In one segment of “Jeremy Corbyn: The Outsider,” which was produced by Vice News, Corbyn describes a Guardian Op-Ed by Jonathan Freedland about Labour’s “anti-Semitism problem” as “Utterly disgusting, subliminal nastiness, the whole lot of it.” He adds that Freedland, who is also a columnist for London’s Jewish Chronicle, is “not a good guy at all. He seems kind of obsessed with me.”

According to the Jewish News, Corbyn in 2013 called on then-Foreign Secretary William Haig to “stop allowing Israel’s criminal politicians to come to our country freely,” “end the siege of Gaza” and to “ensure the BBC portray Palestine fairly,” complaining that the national broadcaster “barely” mentioned “the Palestinian hunger strike!”

Many Jews and Israelis have accused the BBC of having a pro-Palestinian bias.

On the subject of banning Israeli politicians, Corbyn wrote: “I cannot help wondering how long successive governments are going to stand by pretending that an occupying power of so many years should be treated in the same way as the people whose land is not only occupied, but routinely confiscated.”