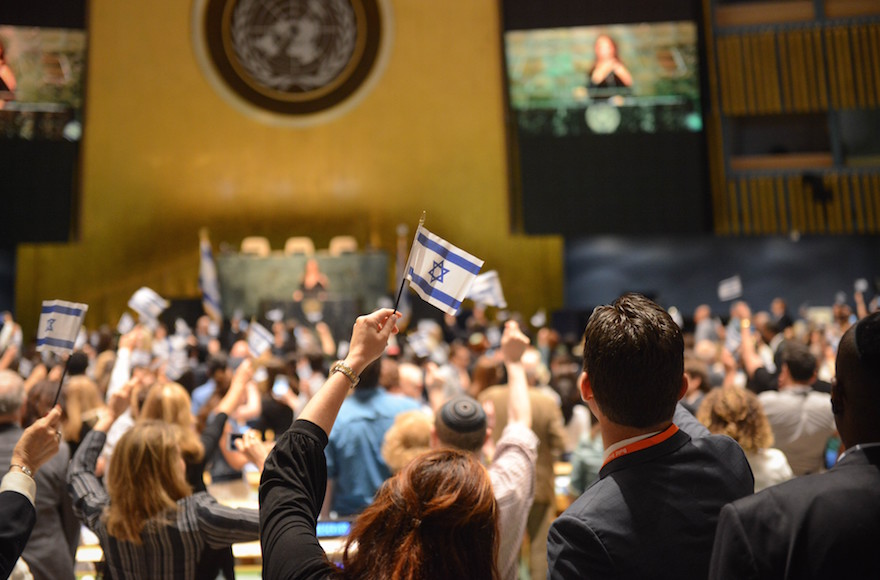 No, hell hadn’t frozen over.

The occasion was a one-day conference hosted by Israel’s U.N. mission devoted to fighting the Boycott, Divestment and Sanctions movement against the Jewish state. It turns out any U.N. member state can reserve space at the world body’s headquarters in New York – even the iconic General Assembly hall – for events. On Tuesday, the Israeli mission stacked the seats of the great hall not with delegates representing countries from around the world but with Jews and pro-Israel activists, many of them college students and high school seniors.

The irony of holding a conference to combat BDS at a site notorious for producing lopsided resolutions against Israel was not lost on anyone.

“Look around this room. Look at all the people who came to support Israel,” Danon said.”One day you will tell your children: I was there when we stopped BDS. I stood up when they tried to turn the world against the Jewish state. I was there for Israel.”

The conference was part pep rally and part strategizing session, aimed both at making a statement and educating, motivating and advising pro-Israel activists about best practices to combat BDS on campus and beyond. Aside from speeches, the General Assembly session included a short video message by Israeli Prime Minister Benjamin Netanyahu and a brief live performance by ex-Hasidic reggae star Matisyahu. He sang “Jerusalem” and “One Day,” a ballad about ending war, with his long graying hair wound into a ponytail and one of his young children by his side.

Though the conference was called Ambassadors Against BDS-International Summit at the United Nations (its Twitter hashtag was #stopBDS), the main panelists at a discussion devoted to fighting BDS on campus said the negative approach most anti-BDS activists adopt is counterproductive.

“Defensiveness is not effective,” said David Sable, global CEO of Young & Rubicam, an international advertising firm that has done extensive research on Americans’ sentiments about Israel.

“Theirs is a positive message, ours is negative. We’re anti, they’re pro,” Sable, a veteran of the Israeli Defense Forces, said of the BDS movement. “We look like a corporate brochure. What they’ve put out is a creative platform for self-expression. If you were a college student, which one would you go for? It’s clear. We got a problem, my friends.”

Sable suggested activists instead focus on winning over the undecideds – those who don’t favor one side or the other in the Israeli-Palestinian conflict – with positive messages about Israel that can resonate with young people. 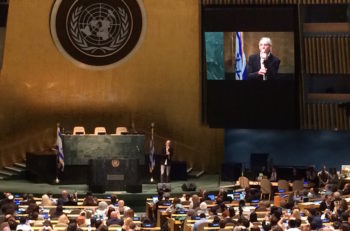 Matisyahu performing at Israel’s mission to the UN’s anti-BDS summit, May 31, 2016. (Uriel Heilman)

Frank Luntz, the Republican political consultant and pollster, said pro-Israel activists need to speak in language that appeals to the demographics least sympathetic toward Israel: women, 18- to 29-year-olds and Democrats.

“Focus on language to the left. Imagine you are speaking to a 21-year-old college Democrat woman,” he said. Focus on educating, don’t yell and don’t be afraid of expressing sympathy for the plight of the Palestinian people, Luntz advised.

Indeed, while the crowd at Tuesday’s conference was strongly, even stridently pro-Israel, speakers who expressed sympathy for the plight of the Palestinians were greeted with warm applause. Among them was SodaStream CEO Daniel Birnbaum, whose West Bank factory in Maale Adumim, which employed Palestinians alongside Israelis, long was a target of the BDS movement. When SodaStream shuttered the factory in 2013 to consolidate its operations at a larger, newly constructed facility in the Israeli city of Beersheba, the move was falsely cited as a victory for the BDS movement. In fact, it was to accommodate the company’s rapid growth, Birnbaum said.

The conference included two Palestinian presenters: “Son of Hamas” author Mosab Hassan Yousef, who for years served as a Shin Bet informant and whose life story has been made into a film, and Bassem Eid, founder of the Palestinian Human Rights Monitoring Group, a watchdog focused on Palestinian institutional malfeasance.

Like many of the speakers at the conference, Eid took advantage of the conference setting to take swipes at the host locale, blaming the United Nations for helping perpetuate the Israeli-Palestinian conflict rather than resolve it by focusing on good governance, accountability and economic growth for the Palestinians.

“Not one country around the world tried to focus on the economic issues and economic prosperity,” Eid said. “At the end of the day we the Palestinians are the ones who are suffering not only from the foreign policies of the international community, but also from the policies of our own leadership.”

The president of the World Jewish Congress, Ronald Lauder, whose group helped sponsor the conference, said organizers chose to hold the event at the United Nations to send a message. The international body was created 70 years ago with the pledge that the world would never again countenance the kind of destruction wrought against the Jews during the Holocaust, yet today the U.N. is being used as a platform for the BDS campaign, he said.

“But there is something that has changed in the last 70 years. We have changed. The era of the quiet Jew, the timid Jew, the ghetto Jew is long over,” Lauder said. “We are no longer victims. We no longer have to rely on others to protect us. And we are absolutely done being quiet. Enough is enough.”

READ MORE: At anti-BDS event in New York, WJC vows to ‘commit all resources’ to the fight