On Shavuot, who (or what) will get the first fruits? 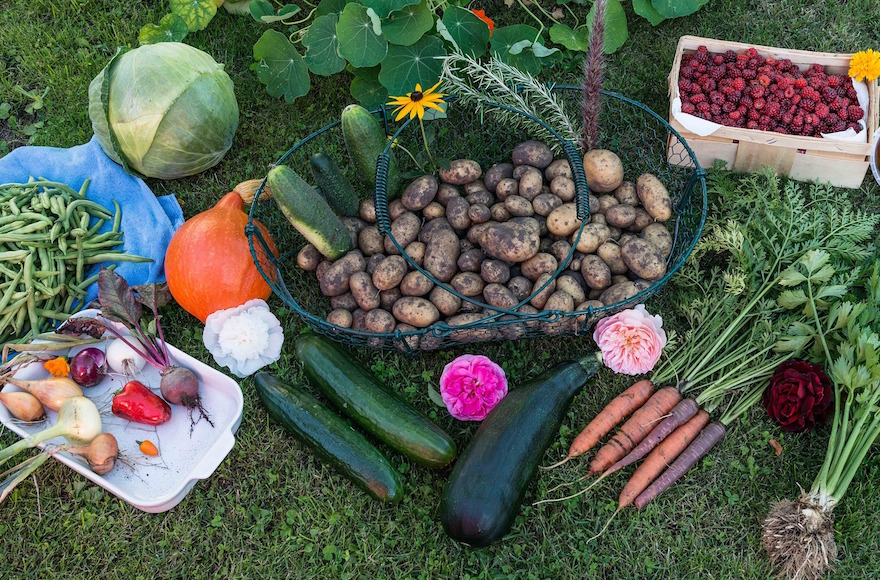 The bounty of the first harvest is something to be celebrated and shared on Shavuot. (Wikimedia Commons)
Advertisement

LOS ANGELES (JTA) — As we approach Shavuot, there’s a battle going on in our garden over who — or what — will get our first fruits.

In ancient days in Israel, beginning at Shavuot — the holiday that marked the wheat harvest as well as the giving of the Torah on Mount Sinai — people brought to the Temple in Jerusalem an offering from their first harvest. The practice is reflected in one of the holiday’s alternate names, Yom Habikkurim, the Day of the First Fruits.

In Deuteronomy, there is an entire ceremony for offering these first fruits. Farmers are required to say a prayer as a reminder that God “brought us to this place and gave us this land, a land flowing with milk and honey.” Though intended for an ancient audience in Israel, this idea of gratitude still resonates today.

Though synagogues today more commonly celebrate Shavuot with confirmations, all-night study sessions and services in which the Ten Commandments are read, many Jews keep in touch with the holiday’s harvest side (Shavuot, which this year begins on Saturday night, is also known as Chag Hakatzir, Festival of Harvest). At Shavuot last year in Israel, President Reuven Rivlin and his wife were presented with two baskets of fruit and vegetables from the nation’s farmers. In the U.S., organizations such as Adamah have held bikkurim parades, and this year, Congregation Kesser Israel in Portland, Oregon, is having a Bikkurim Parade and Fruit Drive for schoolchildren.

My wife and I like to embrace the harvest theme, too. But this year we kept putting off planting day, so unfortunately our first fruits — cucumbers, squash, eggplants and several tomato varieties — won’t be ready by Shavuot. Still, we were looking forward to sharing the bounty of our garden with members of our minyan at our Shabbat potluck lunches.

That is until a raccoon began digging up our garden beds every night searching for grubs.

One morning, as we sorted through havoc in the garden — some plants were uprooted, others were buried — I began to wonder if this was all worth it. After all, there is a huge supermarket five minutes away from my home. We also subscribe to a farm service that delivers a box of organic veggies twice a month.

With so many convenient ways to get fresh food — and so many other things to worry about — did we really need to be at war with nature over cukes? Couldn’t we offer a different kind of first fruit for Shavuot? If the modern interpretation of bikkurim includes sharing and showing gratitude, couldn’t we transpose that idea to another medium of the non-garden variety?

For the past several years, our minyan celebrated a unique night of first fruits. Though decidedly non-agricultural, it was an evening where people could offer up something new: a book they had read, music they recently found, a project they were undertaking at work. One woman even showed clips from a film she was working on.

It was an enjoyable tradition, one that connected us to the holiday’s roots. But I’ve found there is something about growing living things that makes you particularly grateful and mindful of the potential and fragility of life.

As a journalist, I am always grateful to cultivate a thoughtful phrase. But when it comes to both immediate and lasting gratification, that can’t compete with growing a tasty tomato or sharing those tomatoes with a friend.

Shavuot, with its harvest ritual, seems to tell us to be not just consumers but conscious consumers and producers. Growing edible crops makes us aware of the conditions that put food on the table: There are the things over which we have control, like the spacing between plants or how much fertilizer and water to use, and those that are out of our hands, like the weather.

Sometimes I’ve found that the insects, viruses and animals that also want our first fruits are things I can control. Last year, white flies attacked the leaves of the eggplants, so we sprayed the hibiscus plant where they lived with a mixture of rubbing alcohol, liquid soap and water. To scare off the birds that were pecking the tomatoes, we strung up old CDs. Their glint did the job perfectly.

But this year, what to do about the raccoon? First, we tried protecting many of the plants in tomato cages, only to see them pushed aside the next morning. Then, looking for advice on the Humane Society’s website — a few inhumane solutions had crossed my mind as well — I read that turning on a transistor radio in the garden overnight might scare them off.

So, one night, I took a radio out to the garden. I tuned it to an all-night call-in show about health and hoped for a garden miracle.

Growing and harvesting crops is something of a miracle. My wife and I have worked hard to bring in those $10 tomatoes — but we also understand that without a little help, everything can wither on the vine. Some might call a successful harvest the result of luck or great planning, or credit it to that most intangible of human qualities: a green thumb.

But for me, by the time Shavuot rolls around, I’m ready to give some thanks. After months of carefully watching, tending and coaxing, when your labor does bear fruit, you want to acknowledge where your mazel comes from. It’s time to celebrate and show gratitude for another season.

That, to me, is the meaning of Shavuot: giving thanks for being able to fill our baskets once again and sharing the bounty.

As for the radio in the garden, it worked for a week. Then one morning, my wife found an eggplant uprooted. But I am not deterred. On the night of Shavuot, when the heavens are said to open, I will change channels and try an all-night religion show, hoping the raccoon will get the message — or, at least, show some gratitude.

On Shavuot, remembering the day I almost dropped the Torah