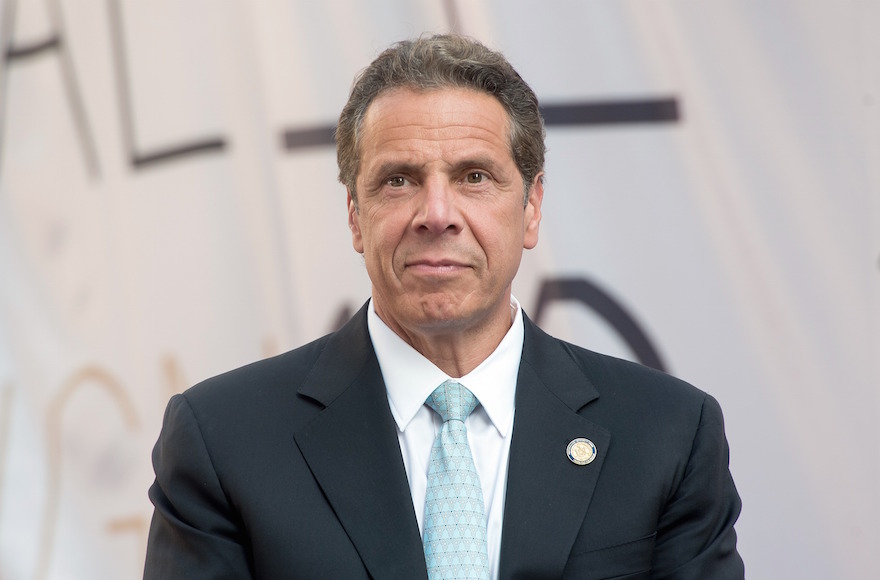 NEW YORK (JTA) — New York Gov. Andrew Cuomo’s executive order opposing BDS shouldn’t have made a splash — but it did.

A handful of states had already passed similar measures opposing the Boycott, Divestment and Sanctions movement against Israel. So had the New York State Senate — though the State Assembly version has been stalled since last year. Cuomo’s order, signed Sunday, was merely supposed to speed up the “tedious” voting process, as he said at the signing ceremony Sunday, just prior to New York’s annual Celebrate Israel Parade.

Like anti-BDS measures passed in other states, Cuomo’s order bans New York state agencies and departments from investing in companies or groups that, as a policy, promote or engage in boycotts, divestment or sanctions against Israel. The order also requires the state to draw up a public list of companies that engage in or promote BDS.

Cuomo’s order stands out, however, as it enacts opposition to BDS in the fourth-most populous state — and the home to the largest number of Jews in the country. And it places Cuomo, a prominent governor and national figure, at the center of the American debate over Israel.

Praised by pro-Israel groups, the order has engendered backlash in the left-wing press and among anti-Israel activists. Publications lambasted it as “McCarthyism” and said it violates First Amendment rights. Jewish Voice for Peace, which supports BDS, is organizing a protest of the order this week outside Cuomo’s office.

Supporters and opponents of the measure both say it marks a tipping point in the battle over BDS in the United States. Backers say Cuomo is opening a new avenue to fight BDS in the absence of legislative approval. Opponents say the order is an unconstitutional act aimed at political pandering.

“There are a variety of tools to combat BDS, and we need all of them,” said Ethan Felson, executive director of the Israel Action Network. “New York is a large economy, and ensuring that there is a wall between expenditures covered under the executive action and the BDS movement is a game changer.”

Seven states — including Alabama, Colorado and Illinois — have passed measures like New York’s, according to Americans for Peace Now. Lawmakers in more than 20 states have proposed similar legislation. But in Cuomo’s executive order, pro-Israel activists see a precedent that can work where bills are stalled.

On Sunday, Cuomo encouraged his fellow governors to follow his lead, comparing the order to New York’s enactment of same-sex marriage in 2011, four years before it was legal nationally.

“We’re already seeing a lot of states attempt to pass anti-BDS legislation,” said Noam Gilboord, Israel and international affairs director for the New York Jewish Community Relations Council. “What this executive order does is open another channel for enacting such legislation should there be difficulties doing so through the legislature.”

But Cuomo has also drawn criticism for enacting a measure his State Legislature did not pass. Rebecca Vilkomerson, executive director of Jewish Voice for Peace, said Cuomo “is trying to hold on to a consensus that doesn’t exist anymore” in support of Israel.

Wayne Barrett, a former Village Voice journalist who has covered Cuomo for decades, said the governor’s move could be seen as undermining his allies in New York’s legislative branch.

“What would be feeding a backlash is that he did it when a Democratic [legislature] wouldn’t do it,” Barrett said. “He’s essentially overriding his own party’s legislative leaders.”

Opponents of the executive order believe their best chance could be in court. They cite legal experts who have said the measure unconstitutionally infringes on First Amendment rights: Because boycotts are a form of free speech, some experts argue, New York’s state government cannot deny government contracts to companies engaging in boycotts. Activists have also objected to the public list of companies that engage in BDS, with some comparing it to McCarthyism.

“The state cannot penalize individuals or entities on the basis of their free expression, and political boycotts are a form of free expression,” Donna Lieberman, executive director of the New York Civil Liberties Union, said in a statement. “Creating a government blacklist that imposes state sanctions based on political beliefs raises First Amendment concerns, and this is no exception.”

Eugene Kontorovich, a Northwestern University law professor who has consulted with anti-BDS groups, said the measure is mostly constitutional because it is akin to statutes prohibiting discrimination against gays and lesbians. He added that the government needs a list of companies to execute the order, and that making that list public is more transparent than keeping it secret.

But he cautioned that Cuomo’s order may still run afoul of free-speech laws by banning investment in companies that merely advocate for boycotts but don’t engage in them.

“The government is not tied to any set of progressive rules,” Kontorovich said. “They see this as a fundamentally unacceptable discrimination.”