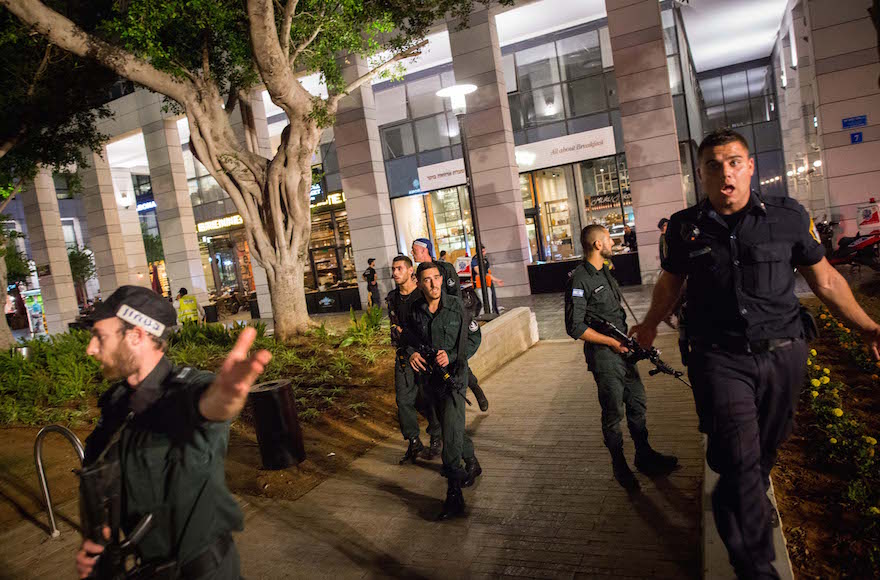 (JTA) — One of the alleged Palestinian gunmen in Wednesday’s shooting attack in Tel Aviv stopped to drink a glass of water in an off-duty Israeli cop’s home as he was fleeing the scene.

According to Haaretz, the suspected gunman encountered the policeman at the entrance of the policeman’s apartment building, a short walk from the shooting scene, and asked in broken Hebrew for water.

The two gunmen are alleged to be Haled and Muhammad al-Mahmar, cousins from a West Bank town near Hebron. Prime Minister Benjamin Netanyahu announced Thursday that a third man suspected of being involved in the attack has also been apprehended.

Not realizing the thirsty man was the alleged terrorist — it was not clear from reports whether it was Haled or Muhammad — the policeman allowed the man to join his wife and children inside as the policeman was rushing home to put on his uniform and leave for the Sarona Market, where the gunmen had opened fire, killing four and injuring 16.

The policeman has not been identified, but Haaretz said he is the son-in-law of former Police Commissioner Assaf Hefetz.

When he reached the terror scene, the policeman realized who his guest was, noticing he was dressed identically to his accomplice, who security forces had shot. The accomplice is being treated at Ichilov Hospital, where his victims also are being treated.

Accompanied by other police officers, the cop rushed back to his home and arrested the alleged terrorist, who was still there.