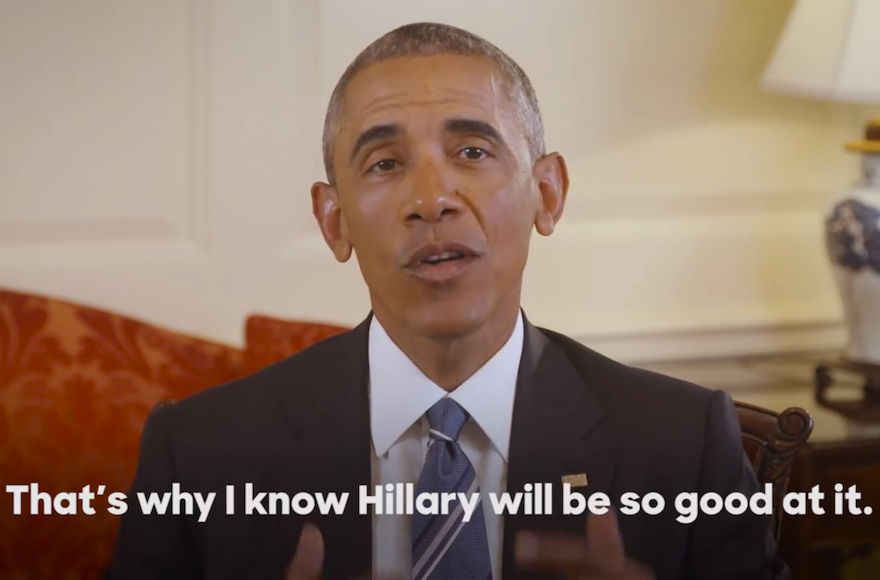 “I don’t think there’s ever been someone so qualified to hold this office,” Obama said of Clinton, who ran against him in 2008 and served as his first secretary of state. “She’s got the courage, the compassion and the heart to get the job done.”

Clinton this week claimed the Democratic nomination, although Sanders, the Independent senator from Vermont and the first Jewish candidate to win major party nomination contests, said he would stick it out until at least Tuesday, when the last primary takes place, in Washington, D.C. Clinton has the required majority of delegates to secure the nomination at the convention.

“There are millions of Americans, not just Democrats, who have cast their ballots for the very first time,” Obama said. “And a lot of that is thanks to Sen. Bernie Sanders, who has run an incredible campaign.”

Obama said he thanked Sanders at their meeting “for shining a spotlight on economic inequality and the outsize influence of money in our politics and bringing young people into our politics.”

Notably, Obama appealed to those who backed him in 2008 and 2012, an allusion to concerns that Clinton is not turning out the young and African Americans in the same proportions as Obama.

“I want those of you who have been with me from the beginning of this incredible journey to be the first to know that I’m with her,” he said, using Clinton’s campaign slogan. “I am fired up and I cannot wait to get out there and campaign for Hillary.”