The 9 best Jewish food trucks in the US 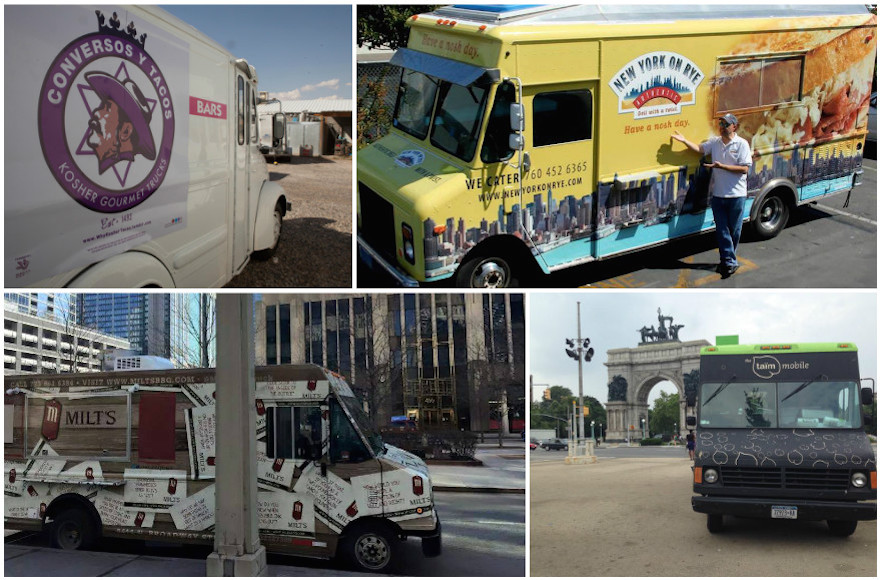 Summer is upon us. And that means swimsuits, summer camps, sticky temperatures — and food trucks.

True, many of these trendy restaurants-on-wheels are known to ply their wares in the depths of winter. But as the weather warms, everyone from office workers to tourists find themselves beckoned outside for lunch.

Sadly, kosher options can be hard to find among the ever-increasing legion of mobile eateries. But take heart: We’ve compiled a list of standouts from across the country. (We’ve also thrown in a couple of our favorite Jewish-themed trucks that are not necessarily kosher.) From corned-beef hash burritos to kosher barbecue, these are nine of the best Jewish-themed food trucks from coast to coast. 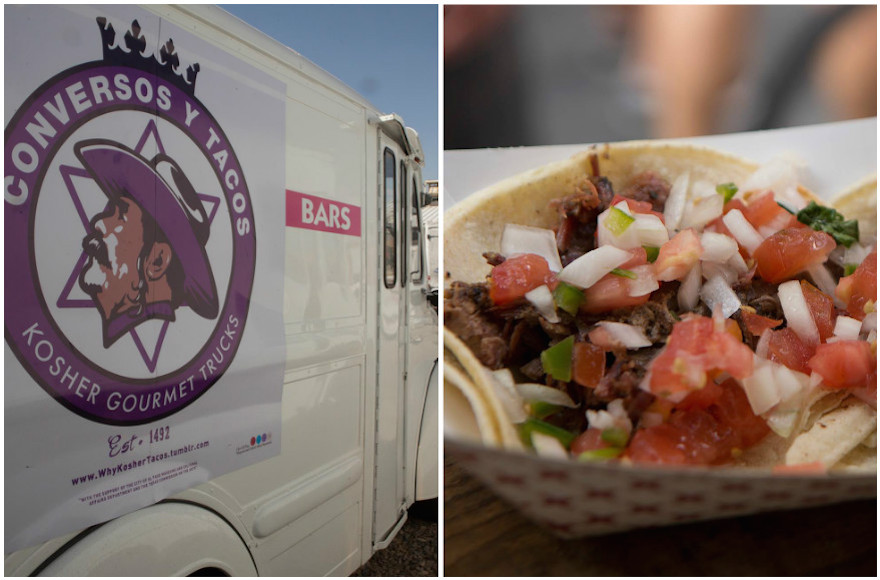 This truck, known for its fusion of Latino and Jewish cuisines, began as an art project in 2013. Founder Peter Svarzbein — a Hispanic Jew and El Paso native, who now serves as a representative in the city’s government — had been interviewing and photographing Latino families in the Southwest who believed their ancestors were Conversos, Spanish Jews forced to convert to Christianity during the Inquisition. When it opened, Svarzbein played a video of his interview subjects and the menus included an Inquisition timeline. Since then, the truck has stayed operational — even if only for special events these days — thanks to its inspired plates, like the brisket and pickles taco. 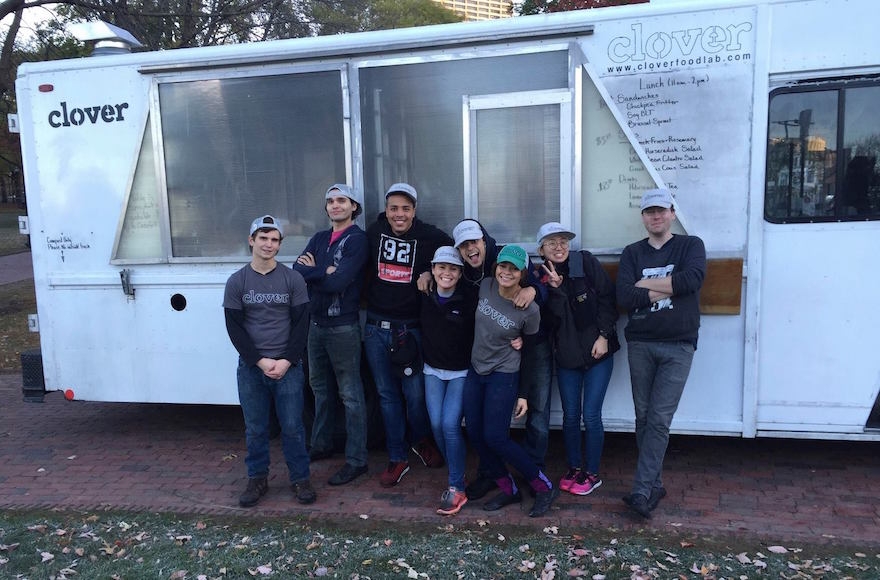 Most restaurants don’t call a falafel sandwich a “chickpea fritter” — but Clover Food Lab founder Ayr Muir isn’t one to follow the crowd. Drawing on data he collects from his customers, Muir obsessively reconfigures his company’s operations, tweaking everything from recipes to refrigerator temperatures. His approach has been a successful one: With eight restaurants and five food trucks, the vegetarian (and now kosher) chain has become a rising health food dynasty in Boston. Don’t miss their creative, seasonal fare like a granola, pear and yogurt compote for breakfast and an egg and eggplant sandwich for lunch — plus year-round staples like seitan sandwiches and those famous chickpea fritters. 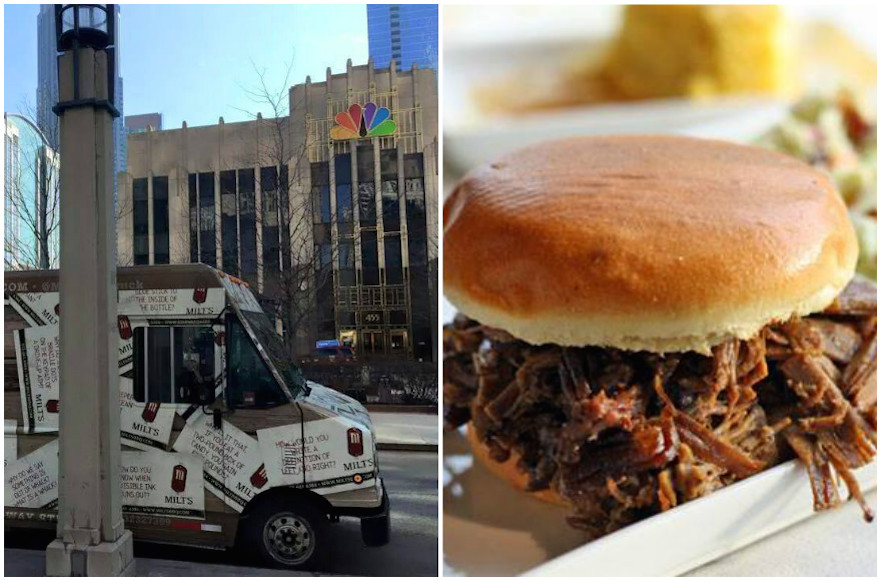 Milt’s Barbecue Truck near the NBC building in Chicago. (Facebook)

Many people would probably like to know what Jake Arrieta, the Cubs star pitcher off to a historic start this season, is eating these days. Turns out he loves the food at Milt’s Barbecue for the Perplexed, a restaurant whose legend has only grown since it was named one of Chicago’s best new restaurants in 2013. (The name is a play on the essential Maimonides text, “The Guide for the Perplexed.”) The old-fashioned barbecue joint got a truck rolling the next year. It features a delicious, if abridged, menu that includes charred hot dogs, brisket sandwiches, smoked chicken and baked beans. Who says good barbecue needs pork? 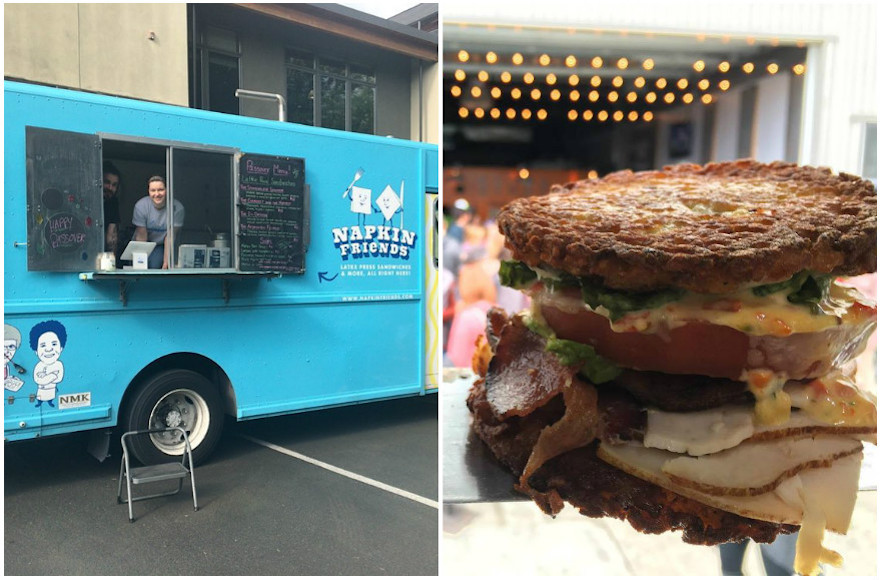 It sounds like a crazy dream or the ultimate Jewish food experiment: What happens when you make a sandwich using latkes instead of bread? Chef Jonny Silverberg took his culinary fantasy and started a food truck in 2014 to focus on the idea. “Being a nice Jewish boy, I’ve grown up eating latkes my whole life,” Silverberg told Seattle Met Magazine. “And then one day something just clicked. Why can’t you just replace the bread and put it on a panini machine and see what happens?” Good question, Jonny — and the answer is even tastier. Highlights of the small menu include the O.G. — pastrami, peppers, arugula, Thousand Island dressing, horseradish cream and gruyere — and an apple-and-brie combo, all pressed between two perfectly crisp potato pancakes. 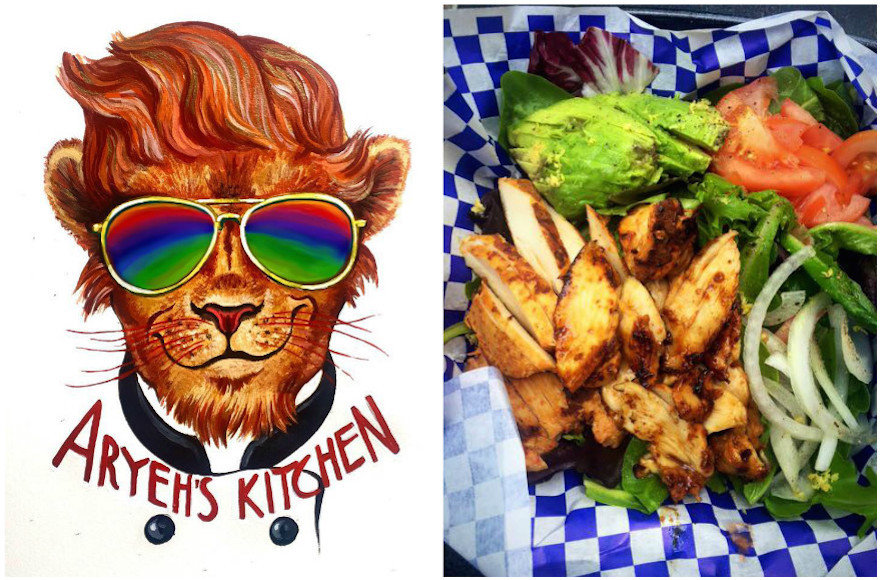 The Aryeh’s Kitchen logo and a sample of its food offerings. (Facebook)

One of the very few places in all of Nashville selling kosher meat is a refurbished 1971 Airstream trailer truck set up by a Vanderbilt University undergrad. Aryeh’s Kitchen, which opened on campus this spring, gives its kosher menu a southern twist with dishes such as fried chicken and waffles, latkes with apple chutney and a BLT with pastrami “bacon.” To keep things student-budget friendly, most of the food is under $10. 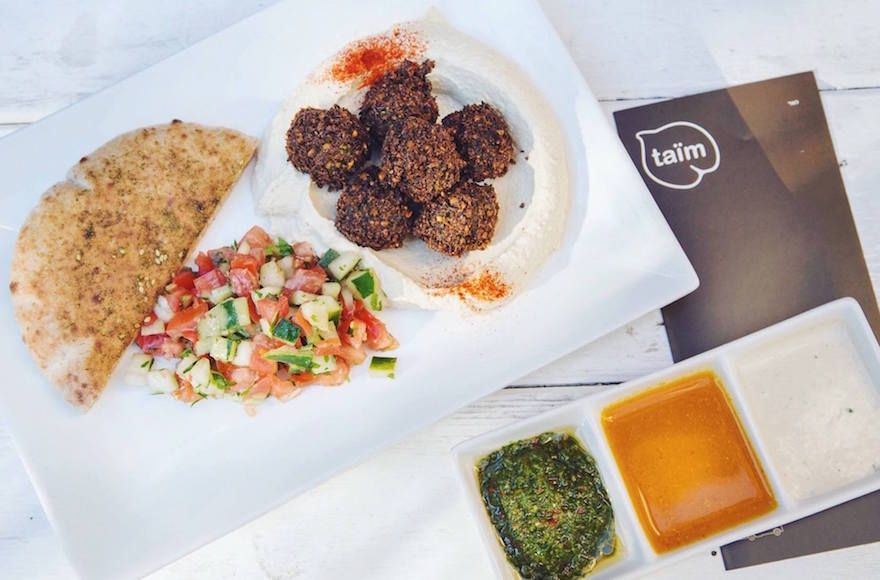 Israeli couple Einat Admony and Stefan Nafziger opened the falafel joint Taim in 2007. As Admony went on to foodie fame as one of New York’s premier restaurateurs — her other acclaimed restaurants include Balaboosta and Bar Bolonat — Taim’s two locations became downtown staples. Oh, and the falafel has been called the best in the city. The Taim Mobile truck, which launched in 2012, serves the restaurant’s greatest hits, from falafel platters and fresh Mediterranean salads to its notable drinks, like ginger-mint lemonade and the strawberry-raspberry-thai basil smoothie. 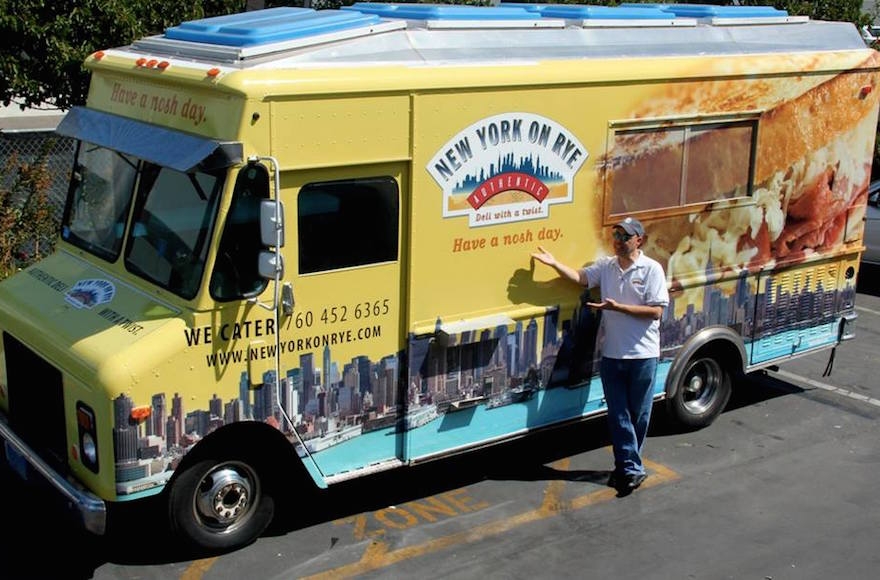 “Have a nosh day” is the motto of the New York on Rye food truck — a sure sign that you’re in Southern California and not the Big Apple. This “deli with a twist” on wheels won San Diego’s Top Truck trophy last year, beating out nearly two dozen others in the city’s first-ever Food Truck War. It serves up New York classics like corned beef on rye, but also gives some deli favorites a distinct So-Cal flair — like the corned beef hash burrito, Cuban sandwich and turkey sandwich with an avocado-and-goat cheese spread. 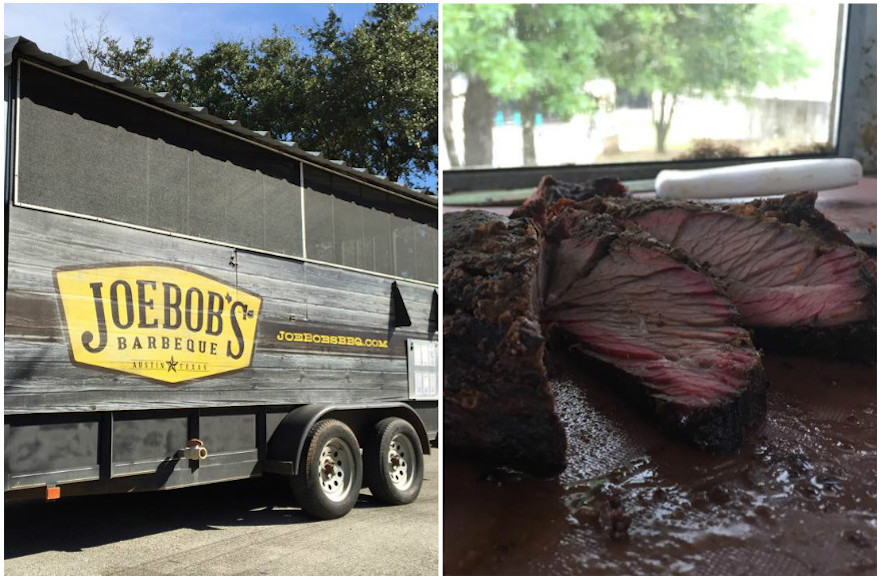 In Texas, barbecue is king. Kosher food? Not so much. So Joel Davis’ truck, which specializes in beef brisket, ribs and sausage, is more innovative than it sounds. JoeBob’s utilizes the “slow and low” cooking method popular throughout the Lone Star State — that’s cooking at a low temperature for a long period of time — which ensures its meat is juicy enough for the most discerning Texan, Jewish or otherwise. But the operation isn’t all about taste — part of each purchase is donated to an array of charities, from the Michael J. Fox Foundation to the Jewish Federation of Greater Austin. Customers can choose which cause they’d like to support. 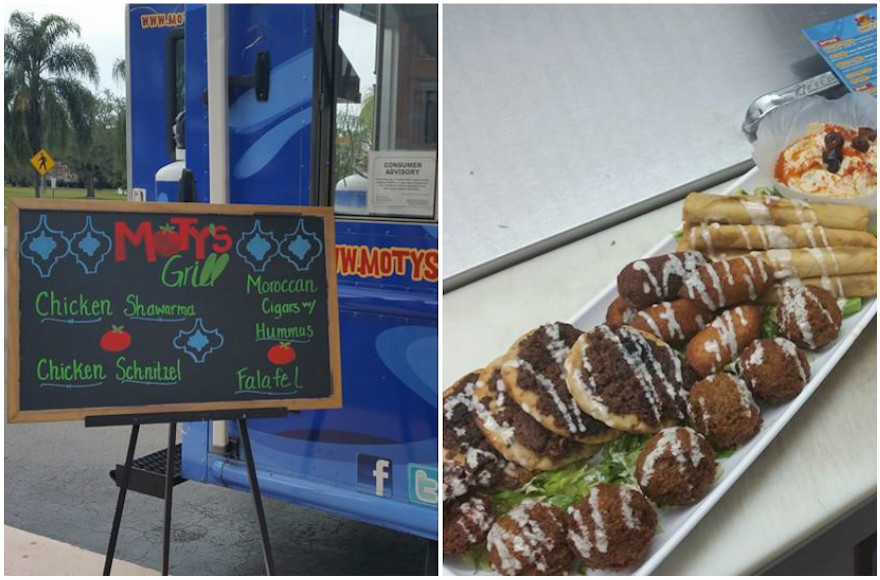 Before moving to Florida, Chef Moty Goldman cooked for the Israeli army — but his food is nothing like mess-hall fare. Though it isn’t technically kosher certified, this health-conscious, Israeli-themed truck claims to only serve kosher ingredients. It often stops by Miami International Airport’s central terminal parking area and is frequently spotted at big events throughout the city. Menu highlights include a kafta pita pocket and attayef, a dessert consisting of fried dough filled with nuts and cinnamon and topped with sugary syrup.