Have WiFi? You can explore the story of the Jewish people anywhere you go 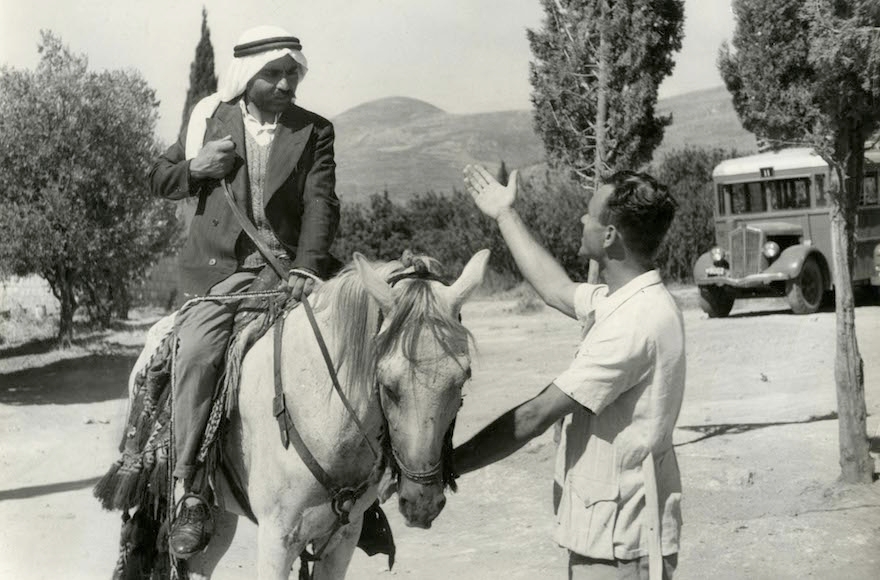 This photograph of Arab neighbor visiting a friend in Kibbutz Kfar Giladi,1945-1946, is an example of the Museum of the Jewish People's vast archives. (Herbert Sonnenfeld/Courtesy of Beit Hatfutsot)
Advertisement

TEL AVIV — When Benny Daon entered the Israeli high-tech scene in 1993, the Jewish state was just beginning to earn its reputation as a global hub of cutting-edge technology. He worked his way up the ladder, first at other people’s companies and then as CEO of his own business, Shunra Software.

For the coder and self-described “groker” (that’s geek-speak for deeply immersing oneself in programming language), it was a classic case of right place, right time. Shunra’s profit margins flourished just as Israel — and the Tel Aviv’s hub of high-tech companies known as Silicon Wadi — gained respect across the globe.

Eight years in at Shunra, Daon was overseeing 60 employees and investment figures of more than $10 million. But despite the healthy growth in his bottom line, Daon was itching for work with a more philanthropic edge. He quit while he was ahead and went back to coding full-time while searching for his next calling.

At about the same time, Beit Hatfutsot-Museum of the Jewish People was also restarting itself. The 40-year-old institution, which sits on the campus of Tel Aviv University and is committed to telling the diverse stories of the Jewish people across the globe, had committed itself to a revamp fit for the digital age. A major component of the overhaul, the museum’s founders decided, would be a new online presence calibrated for the age of social media.

To get up to speed, the museum decided not to outsource its website and online archives. Instead, Beit Hatfutsot built a mini high-tech company right in the heart of its physical campus. It recruited 10 employees from Israel’s high-tech scene and set them up in a nerve center at the museum’s heart.

“Most places, when faced with a project like this, they outsource it,” said the museum’s CEO, Dan Tadmor. “It’s easier and probably even cheaper. But it was clear to us that [the digital presence] was part of our core business. Our databases and information have always been one of the two major reasons people came to the museum, and as a rule of thumb you don’t outsource core business.”

For Daon, who now serves as the team’s lead engineer, it was a match made in Jewish communal heaven.

“It’s much more meaningful than what I did in high-tech,” he said. “We’re using high technology here, too, but the company is not a startup. It’s high-tech that is working with Jewish heritage.”

In addition to being a brick-and-mortar museum, Beit Hatfutsot has long been the repository of deep databases filled with artifacts of Jewish history. There are wells of black-and-white photos, some of them capturing Jewish history’s most intimate or influential moments. There are music archives, their antiquated cassettes and records holding recorded strains of Jewish liturgy from the days before Hitler. There are piles of information on Jewish communities, both flourishing and floundered, as well as a well-known database containing the roots of Jewish family names.

For its first four decades, visitors who wanted to access these databases had to travel to Beit Hatfutsot to search them in person. Today, however, thanks to Daon and a small tech-savvy team, the information is being processed and transferred online so anyone with a WiFi signal can dive right in.

“A lot of museums invest their time and energy in creating an online museum, where you can walk through the museum in 360-degree images,” said Tadmor, who has helped drive the initiative to move resources online. “We’re not doing that. The museum itself is not going online so much as the institution of Beit Hatfutsot is. That means the museum, its databases, its education and its culture — it’s all a part of the shift.”

Beit Hatfutsot’s online databases celebrated a soft launch earlier in the spring and became live and fully searchable last month. To get them up to speed, the high-tech team has had a dual focus. The first is taking the millions upon millions of pieces of information stored within the hard-copy databases and uploading them to the internet — that means managing copyright and privacy issues, as well as a the basic troubles of conversion and format. The second focus, which is equally daunting, is getting those images packaged behind a user interface that are both attractive and intuitive for its users.

“There are 14 million Jews around the world and countless other people who are also interested in the Jewish people,” Tadmor said. “The vast majority of those people will never set foot into Beit Hatfutsot. Most of them will never even come to Israel. So we feel it’s our duty to take this information we have and make it accessible for anyone who is interested.”

Today, Daon is making significantly less money than he did during his years in high-tech, but his work, he says, is far more rewarding. The Netanya native says one of his favorite parts of his job is discovering glimmers of his own family’s Jewish history while writing and testing the website’s code.

“When I need to test something out, I often write my own grandfather’s name and the town he came from in Poland into the search engine,” Daon acknowledged. “It’s work that helps me remember my own family’s story.”

Netanyahu inaugurates new wing at Museum of the Jewish People