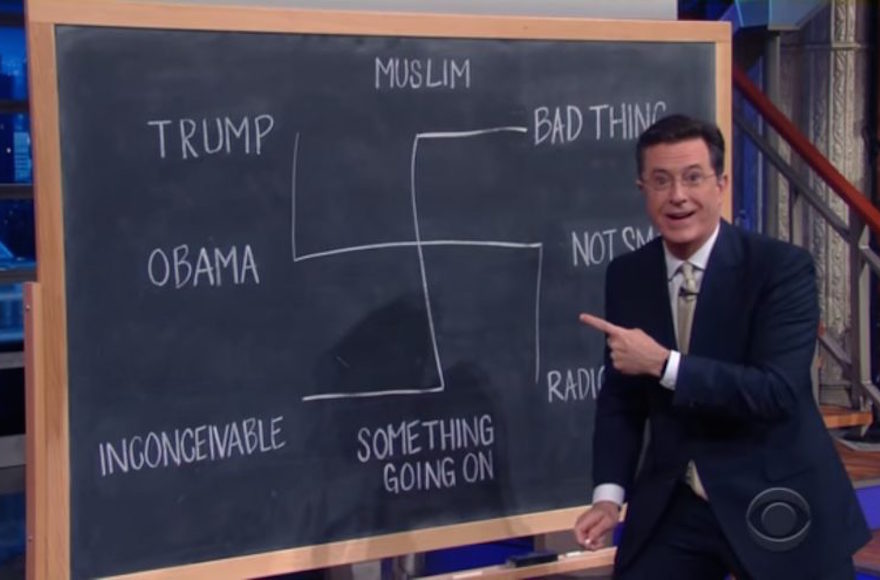 America, 2016. Where a comedian mocks a major party’s presumptive presidential nominee by drawing a large Nazi symbol on television, and no one is really surprised.

The swastika, courtesy of CBS’s “The Late Show” host Stephen Colbert, came after a routine ribbing of Donald Trump, who in the wake of Sunday’s terrorist attack in Orlando seemed to imply that President Obama may have willfully ignored the threat.

To Colbert, Trump’s claims sounded like “something my racist aunt would say at a picnic.” But to try to suss out Trump’s meaning, he turned to a glorified chalkboard he called the “Figure-it-out-atron 5000.”

“I’ve got to think like Trump, so first, I’m not going to take my meds,” he said. “Woooo! I see patterns where none exist!”

Then, connecting lines at right angles between the words “Trump,” “radical Islam,” “inconceivable” and “bad thing,” he drew a swastika. By the first zig-zag, the audience was on to him, cheers rising as he completed the symbol.

He soon erased it. But not before posing next to it with a grin.