Falafel wars in Paris: Who’s got the better balls? 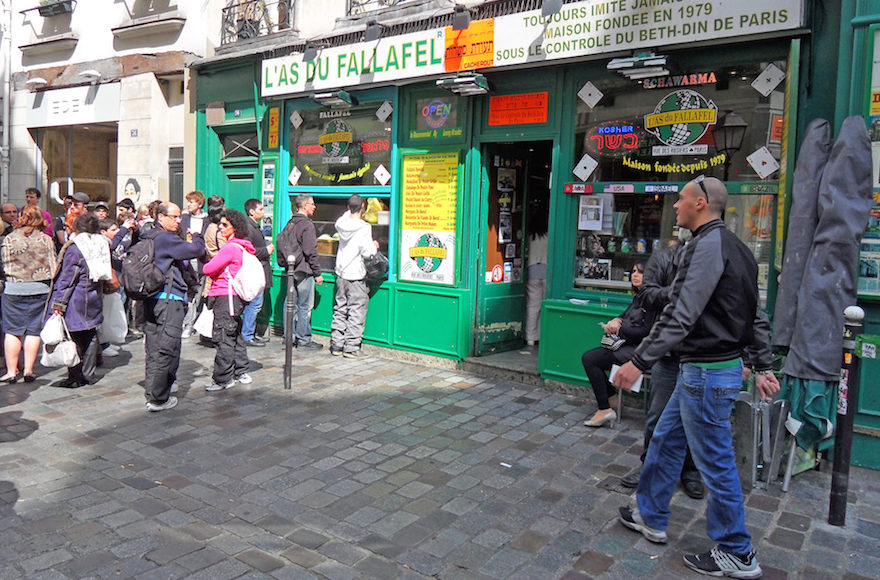 PARIS (JTA) — On a crowded sidewalk in the French capital, Yomi Peretz exchanges jokes and backslaps with customers who are waiting in a 20-yard queue in the rain to enter his falafel shop.

This chummy interaction comes naturally to Peretz, a tall enthusiast of boxing and poker who owns and runs l’As du Fallafel (The Falafel Ace), one of the best-known eateries in Paris. But working the crowd also serves a commercial purpose.

“I do it to keep up morale in the queue,” Peretz said on a recent Thursday. “They may be waiting here for 20-30 minutes and if they lose hope, they’ll go away.”

Opened in 1979 by his parents in the old Jewish quarter of the Marais, the Falafel Ace is an institution distinguished by its international reputation and the fact that it has kosher certification. It is a Marais must-see thanks to its listing in travel guides and countless reviews in local and international media — including The New York Times, which wrote about Peretz’s eatery in 2006.

The Ace is so busy it has two lines: for take-out and table seating.

But this incontestable popularity isn’t enough for Peretz. In recent years, the Ace has played hardball with a smaller competitor, Mi-Va-Mi, across the way on Rosiers Street. Since opening in 1998, Mi-Va-Mi has struggled in the Ace’s shadow. Its owner, Martine Ouaknine, decided to open on Shabbat and subsequently lost her kosher certificate. So Peretz bought the space recently from where Mi-Va-Mi operates and is refusing to extend her lease beyond July. Ouaknine is fighting the eviction.

Mi-Va-Mi has petitioned a Paris administrative court for a stay, citing its 18-year history at its current address and laws designed to protect businesses from hostile takeovers.

“They won’t get rid of us so easily,” said Ouaknine, speaking to a visitor in her half-empty restaurant as she gestured at the growing line across the road at the Ace. “There’s a fight, but it’s not over customers. We’re fighting to survive, they’re fighting to get rid of us just for the heck of it. We’re certainly no threat to them.”

The court case is ongoing. 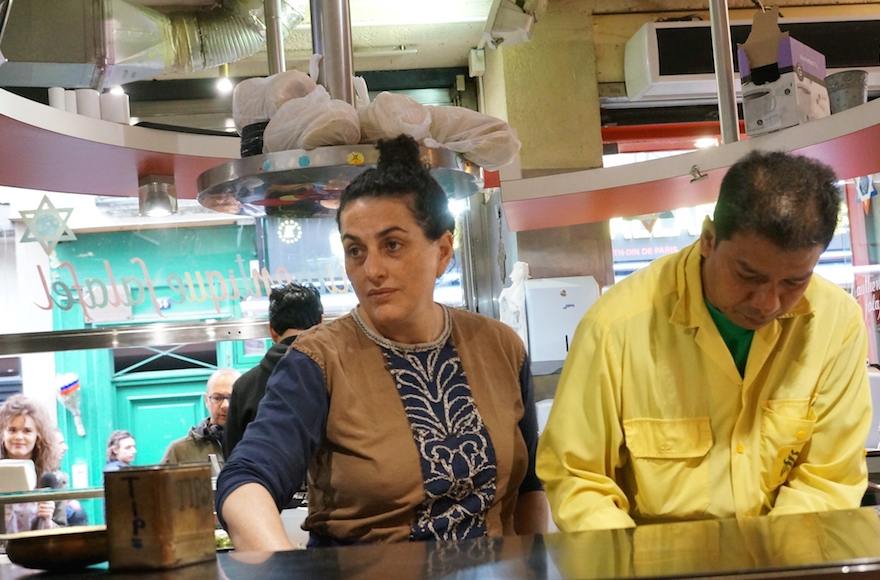 Martine Ouaknine, left, with an employee of her Mi-Va-Mi falafel shop in the historical Jewish quarter of Paris, May 18, 2016. (Cnaan Liphshiz)

Peretz declined to discuss the Mi-Va-Mi fight in any detail.

“A competitor down the road, you can live with,” he said. “But a competitor right in front of you is annoying. All I can tell you is that there’s no war. We’re too busy making a living here.”

Peretz interrupts the interview to ask two young ladies walking down the street if they are interested in lunching at the restaurant. When they answer they had already eaten, he assures them that their figures are “gorgeous enough to afford a second lunch,” but they walk away giggling.

“I should be wearing a red clown nose with all the nonsense I’m doing here,” he remarks with a smile. But Peretz attributes the popularity of his restaurant not to his clowning or PR, but to a “secret mix of spices, which we buy in Israel and mix here.”

Among the Marais’ kosher eateries, the Ace’s success is unusual. Once home to thousands of Ashkenazi Jews, the Marais, or the 4th arrondissement, once had dozens of kosher restaurants and shops. During the 1970s, most of the Jewish residents and businesses left, cashing in on rising prices for real estate. They were replaced by non-kosher businesses that could turn a greater profit from the constant flow of tourists in part because they remained open on Shabbat.

One of the restaurants barely hanging on is the prosaically named Kosher Pizza, owned by Moshe Benjamin Engelberg, who is widely regarded for his thin-crusted pies. Like many vendors of Jewish food in the Marais, Engelberg said he relies heavily on tourists from Israel and the United States.

“Few French Jews live here,” he said. “It’s not like when I was a young man and there were four kosher restaurants on every corner.”

But both the Falafel Ace and Mi-Va-Mi have Parisian regulars who swear by their merits. One Ace lover said it has “more atmosphere,” while a Mi-Va-Mi supporter said the falafel there “is lighter and fluffier than the Ace’s.” A patron of The Falafel Ace holding the restaurant’s acclaimed falafel sandwich, which is covered in hot sauce. (Wikimedia Commons)

During the lunch rush, ushers join Peretz on the sidewalk, handing out numbers. And on very busy days, the ushers demand payment in advance from patrons still standing in line. Only the disabled and elderly are allowed to wait inside, out of the rain or sun, for their number to be called.

The walls of the crowded restaurant carry photos of celebrities during visits to the Ace. The list includes Lenny Kravitz, Benjamin Netanyahu and former regular Natalie Portman, who still comes here when she’s in Paris with her France-born husband.

Inside the Ace, a staff of 12 tends to about 15 tables so closely positioned that the waiters need to raise their arms to pass between. The bill arrives unsolicited after 20 minutes. Unusual for a French eatery, neither deserts nor coffee are on offer.

“This whole circus is actually quite annoying,” said Henry Sultan, a Parisian Jew who comes to the Ace with his 75-year-old mother, Eugenie. “But my mother says it’s the best and cleanest because it’s kosher, so we endure.”

Over at Mi-Va-Mi, the atmosphere is fundamentally different. Soft-spoken and slightly introverted, Ouaknine patiently explains to a customer why some falafel balls are green on the inside — that’s the Lebanese variety, which is Mi-Va-Mi’s specialty — and why others, of the Egyptian kind, are yellow, as at the Ace.

“Ours is a family atmosphere, and we’ll stay here as long as there’s a demand for that,” she said.

Finally, a kosher restaurant with Michelin acclaim in Paris