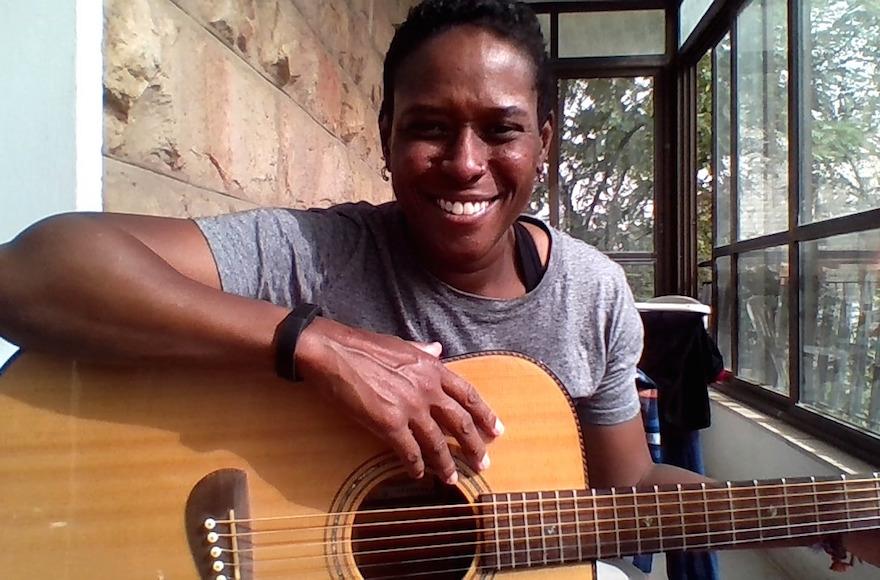 Sandra Lawson, an African-American lesbian rabbinical student, wants to spread Judaism outside of the synagogue. (Courtesy of Sandra Lawson)
Advertisement

PHILADELPHIA (JTA) — Sandra Lawson didn’t expect to perform a public benediction at her local pub in this city’s Roxborough neighborhood.

But when her friend Jay, who was entering firefighter training, asked her for a blessing earlier this year, she stood with him in the middle of the room and put her rabbinical school training into action.

“Avraham, Isaac and Jacob, please bless Jay on his journey of being a firefighter,” she said, placing her hand on his shoulder. “Come back and have a beer with me.”

For Lawson, a bar is a natural place to create a Jewish ceremony. As a rabbi in training who herself is breaking barriers, Lawson is eager to take Jewish practice outside the traditional bounds of the synagogue.

Lawson, 45, lives at the intersection of several communities while being in a small demographic within the American Jewish world. As an African-American lesbian who converted to Judaism, eats vegan and is now studying to be a rabbi at the Reconstructionist Rabbinical College, Lawson believes American Jews need to rethink how their community looks and where it should congregate.

“Redefining or helping people understand what the Jewish community looks like today is something I want to do,” Lawson told JTA in a vegan cafe where she holds Friday night services.

“In the U.S., people can deal with a female rabbi, a queer rabbi,” she continued. But, “‘Oh, you’re black, too? That’s too much to deal with in one day.’ When you put those identities together, it’s too much to handle.”

Lawson grew up in a military family and, while Christian, wasn’t raised religious. Her first exposure to Judaism came in an Old Testament course at St. Leo University in Florida while she was serving in the Army as a military police officer. Following military service, Lawson became a personal trainer in Atlanta, where one of her clients was Joshua Lesser, a Reconstructionist rabbi and local activist for racial justice. She began attending services at his Congregation Beth Haverim, a synagogue for the LGBT community, and converted in 2004.

She decided to become a rabbi after representing the Jewish community at a LGBT memorial service for Coretta Scott King, the Rev. Martin Luther King Jr.’s wife. She realized there that being an African-American Jew could allow her to strengthen connections among communities. She’s on track to graduate from rabbinical school in 2018.

“I was able to help make those connections and build some of those bridges by being someone who wants to be clergy and help build more trust around interfaith stuff,” Lawson said. She wants to get to a point where “when I Google ‘rabbi,’ I see someone other than a bearded white guy.”

(Indeed, when you Google “rabbi,” all you see initially are bearded white men.)

Lawson says “nobody’s been horrible to me,” but she has encountered different challenges to her identity, depending on where she is. At one synagogue, she was standing in a prayer shawl and kippah with a friend when a congregant approached her friend and asked him if she was Jewish.

“I don’t know anyone who goes to a synagogue, wears a kippah and a tallit Saturday morning who is not Jewish,” she said. “Every community has their own idea of who is a Jew and what does a Jew look like. If you don’t fit that framework, they don’t think you’re Jewish.” 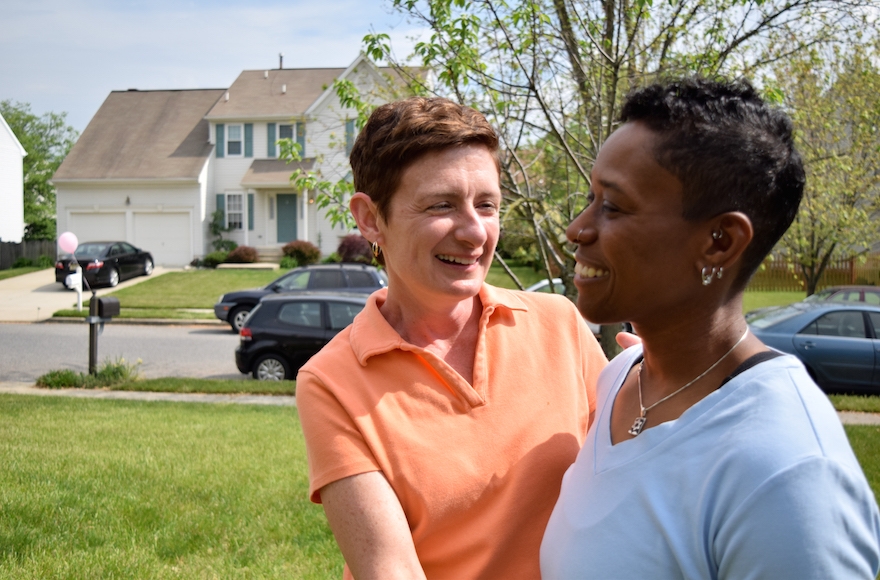 Sandra Lawson with her wife, Susan Hurrey. Lawson is due to receive her rabbinic ordination in 2018. (Courtesy of Lawson)

Studying last year in Israel, Lawson said she would encounter trouble when visiting the Western Wall. Attendants saw her haircut and told her on three separate occasions to go to the men’s section. Once she had to grab her breasts to show she was a woman.

Diane Tobin, founder of Be’chol Lashon, a group that advocates for Jews of color, says that in many cases, white Jews address race crudely because they lack the language skills to talk sensitively about it. Lawson, she says, “is the embodiment of a younger generation of Jews who have intersecting identities.”

Lawson wants to expand the Jewish conversation in part by taking it outside its traditional setting. She would rather lead services in a park, or address the concerns of Jews and non-Jews in inner cities, than be a full-time pulpit rabbi. Every month she runs a Friday night service at Arnold’s Way, a vegan cafe and health store near Philadelphia, which she begins with a song she wrote based on a verse from Psalms.

Lawson also uses social media and live video feeds to spread Jewish content. On Mondays, Thursdays and Saturdays, traditionally the days when the Torah is read, she will put out a stream of video content on Snapchat featuring Torah study interspersed with humorous images. On June 16, her thoughts about the weekly Torah portion came after images of her face overlaid with dog ears and her cheeks inflated.

“The model of the synagogue, where you have to pay large dues, pay to come to High Holidays, is not a model I want to duplicate,” she said. “We live in a different world now. If you’re going to wait for people to come to your synagogue, your JCC, you’ll be waiting a long time.”

Lawson’s personal Jewish practice also happens at unexpected places. Because her iPod has pop music interspersed with Jewish liturgy — like “Modeh Ani,” the prayer said upon waking up — she’ll sometimes find herself praying while working out. Because she also plays a zombie game on the device while she runs, things can become confusing. But she doesn’t let that faze her.

Where Jews of color go to ‘feel normal’ at summer camp