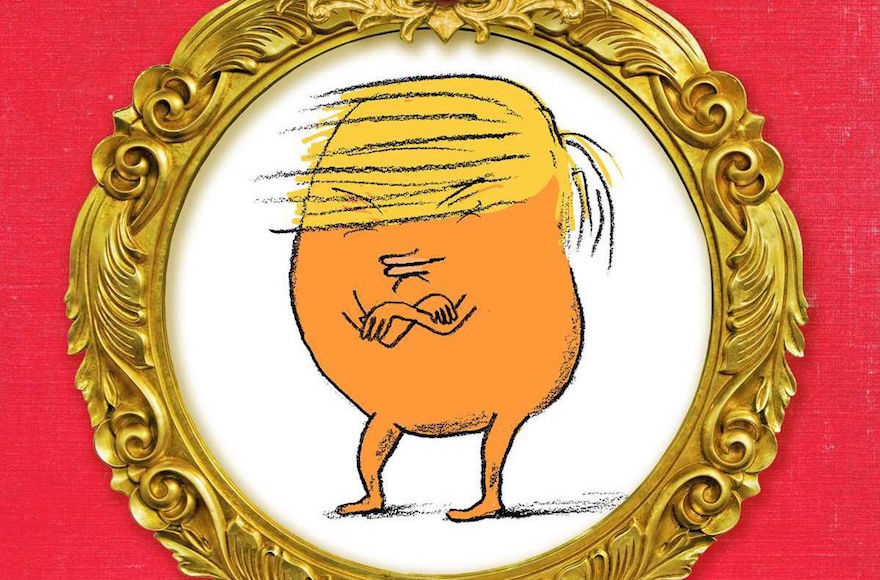 Where do babies come from? Are we there yet? What should I make of the Donald Trump phenomenon?

Though it doesn’t come out until July 4, the Dr. Seuss-like book is already on Amazon’s best seller list, propelled by Black’s appearance last week on “The Late Show with Stephen Colbert.”

In Black’s telling, “the American Trump” is a self-obsessed, attention-seeking orange “beasty” — with unusually small hands. As he puts it, in rhyme: “Its skin is bright orange, its figure is plump. Its fur so complex you might get enveloped. Its hands though are, sadly, underdeveloped.”

Another noteworthy line reads: “Its diet is cash, its friends all go-getters. Its poop spells out ‘Trump’ in ten-foot-high letters.”

Illustrator Marc Rosenthal provides a minimalist illustration of Black’s Trump: an orange body with a poof of yellow hair covering his eyes, and beneath the hair, angry eyebrows and pursed lips.

You probably know Black as a comedian. He’s starred in the cult film “Wet Hot American Summer” and the cult TV shows “The State” and “Stella.” These days, he stars as a servile butler named Peepers in the Comedy Central American period comedy, “Another Period.”

But this isn’t his first turn as a writer. He’s actually a New York Times bestselling author — most recently of the memoir “Navel Gazing: True Tales of Bodies, Mostly Mine (but also my mom’s, which I know sounds weird)” — and has six previous children’s books under his belt.

Black (nee Schwartz) is also a master of the 140-character literary form, with over 2 million Twitter followers. Like many other prominent Jews, his tweets about Trump have earned him the anti-Semitic ire of supporters of Trump’s Republican presidential campaign.

My experience, too, minus the gun. Never experienced anti-Semitism until speaking out against Trump. https://t.co/ns6vvpq7Lm

You might think the the children’s book was motivated by this pro-Trump Twitter trolling. But Black has said he was in fact inspired by Hillary Clinton, Trump’s Democratic challenger for the keys to the White House.

“I was in the children’s section and saw one of those inspirational books about Hillary Clinton and it kind of made me laugh if you could do one about Donald Trump because there is nothing inspirational about him in any way shape or form,” he told The New York Daily News this week.

Still, news of the book’s release has brought on a new onslaught of Twitter anti-Semitism by the “alt-right,” an amorphous far-right movement that lives mostly online, complete with photoshops of Black in a gas chamber manned by Trump.

(((@michaelianblack))) gets a rude wake up call by being outed as the #JewTerrorist he is. Share.

Mostly, Black merely retweets the hateful messages with links to the book’s Amazon page or labels the posters “Trump supporters” in the same way the alt-right labels Jews on Twitter.

Wouldn't have anticipated my primary marketing strategy for "A Child's First Book of Trump" would be RTing Nazis. https://t.co/wuFfLLRw8o

The moral of “A Child’s First Book of Trump,” being published by Simon & Schuster, seems to be that the correct response to a creature like Trump is to simply ignore him. That may be so. But his own response — highlighting and mocking him — is much more fun.